After playing videogames for so long, you could be forgiven for thinking you’ve seen every combination of genres. The Riftbreaker is a wonderful example of why you should never assume you have seen it all. At first glance, The Riftbreaker seems like an ordinary tower defence game, with polished up presentation, but there is a lot more on offer than simply defending the base.

The Riftbreaker takes the standard tower defence gameplay and smashes it together with a base-building, action-RPG. It’s a more expanded version of EXOR Studios’ previous title, X-Morph: Defense or the classic RTS Harvest: Massive Encounter. The game sees the player attempt to establish a base on an alien planet known as Galatea 37, strengthening humanity's hopes of colonising just about anything it can. Beyond the colonisation of another world, we also get to massacre the local wildlife and plunder the planet's resources. To do this, the game provides the player with a large variety of weaponry. This ranges from hack ‘n’ slash melee madness to havoc inducing heavy artillery. These can all be upgraded as the player character’s mecha-suit known as Mr. Riggs. There’s a lot to research, not just on the suit but in regards to the base itself. 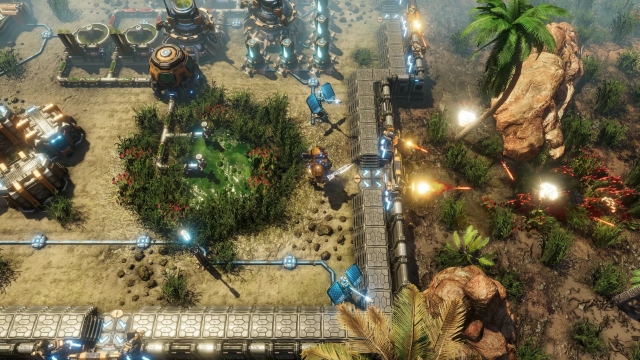 The game is split into two modes: Story and Endless Mode. The endless mode is self explanatory. A classic game mode we’ve all experienced. Create a base and fend off the relentless horde. The Riftbreaker changes things up slightly by focusing the player on offense as well as defence. Building a strong base is important, but requires the player to leave home to find the resources to advance their technology. The player also has the ability to attack enemy ‘nests’ to reduce the rate of attacks. It’s almost pivotal to go on the attack to prevent your base becoming easily overrun. Whilst out in the world, the player can create factories to mine the different mineral types on the planet. These will also have to be defended alongside the player’s base as the game looks to constantly keep the player moving.

There’s a lot of focus on ensuring no part of the game becomes easy or overpowered. The game constantly has you researching the next improvements to ensure your character’s gear and base are ready for battle. The Riftbreaker is not really a game that lets you plonk down towers and watch as the waves fall to your unstoppable power. You have to constantly explore and constantly learn in order to survive. There isn’t a clear path to victory in The Riftbreaker.

The story mode is simple enough in concept. The human race is looking to establish a base on Galatea 37 and you, The Riftbreaker, have been tasked with the job of creating and keeping it safe. There’s not much more information than that - only the introductory mission is currently available. During the story mode, the player is required to complete certain tasks/missions. Although not expanded on much in the game's early build, it’ll be interesting to see how they build the story moving forward.

The Riftbreaker is due to release in 2020 and looks set to shake up the classic tower defence formula. EXOR Studios is keen to hear player feedback on the ideas it is looking to implement, so be sure to follow the progress on social media or on its official Discord channel.