To get the obvious comparison out of the way, yes, Turbo Golf Racing from developer Hugecalf Studios and publisher Secret Mode looks an awful lot like Rocket League. However, as I haven’t actually played the other ‘hit balls with cars into goals’ game yet, I can’t actually say much more than that without it being hearsay. In any case, from my three and a half hours with Turbo Golf Racing, I can safely say that the Early Access game is very fun and does a great job of providing a uniquely entertaining space to play around in. Speaking personally, I have a little bit of a gripe in the semantics of the game’s title, but that’s not really a huge deal.

Turbo Golf Racing has a reliably simple premise: use a car to get a large ball into a goal as quickly as possible. Thankfully, the execution of that premise is also usually quite reliable. In my experience with the title, I never found controlling my car to be unreasonably difficult, with driving and gliding around both offering responsive controls and satisfying speed. I did however notice that other players online — including some of my own friends — sometimes seemed to have major issues with losing control over their vehicles, though I never personally experienced this issue. Actually hitting the ball and aiming it to land where I wanted it to go was certainly difficult to get used to; even with the optional line that predicts where the golf ball will go once the car hits it, the slightest change to the vehicle’s speed, orientation, and angle can result in a wide variety of distances and directions. Certainly, Turbo Golf Racing offers gameplay that is easy to start learning but difficult to truly master.

However, I believe I eventually got a handle on it by practicing on the single-player time trials. In each one, players can try any given course again and again in an effort to complete the level fast enough to earn three stars or to beat their best time. At first, I struggled to get anything under a couple of minutes, even when the level told me that I should be able to complete it in roughly 20 seconds. But through repetition, ingenuity, and several large helpings of luck, I cobbled together a few three-star completions. Plus, with my successes, I was able to unlock several Cores that allowed me to equip passive and active skills to help (and hinder) my performance. 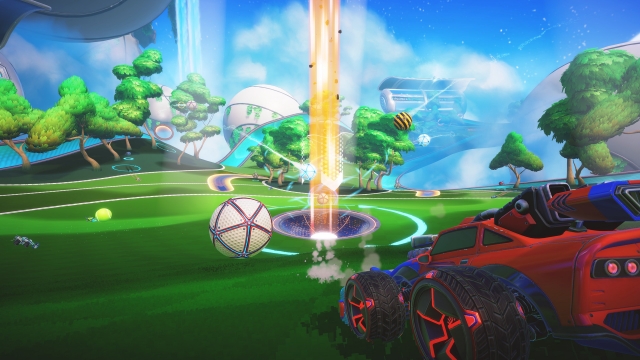 These same courses return in what is likely the main attraction: the multiplayer, where up to eight racers compete to get the best times across different levels. With a variety of items to snag, the competitors can slow down their competition and speed themselves up, but it is also somewhat rare to get to the end of a given game with all eight players still in. This seems to be primarily due to some connection issues, though again I never experienced any of these issues myself!

Thankfully, the levels themselves generally look quite nice to drive around in, with a rather cartoonish art style that works well for hitting massive golf balls with cars. The sound effects are nicely satisfying as well, though I can’t really say much of the soundtrack is memorable. All of the boost pads and items to pick up really pop out against the actual tracks themselves, which is very helpful when you really need to find a source of boost power. 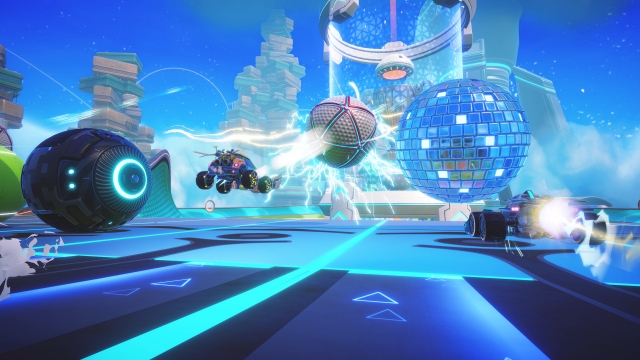 Honestly, the only aspect of the game that fell flat for me was the name itself! When I read “Turbo Golf Racing”, I was anticipating a game that was a lot more golf-like than what the actual game ended up being. It feels very odd to play a game called “Golf” where the score is dependent on how quick you are at getting a ball into a goal as opposed to getting a ball into a goal in as few strokes/hits as possible. I mean, it’s really not a major point, nor even a particularly important strike against the game, but I still felt rather weird about it the whole time.

I imagine that many of the connection and control issues will likely be addressed once the game leaves Early Access, but what Turbo Golf Racing currently has is still a very enjoyable collection of courses that can be enjoyed both alone and with friends and strangers! There are a lot of Cores and cosmetic options to unlock through playing the game, which is really nice for the little completionist inside me, but having fun with friends is really where it’s at with Turbo Golf Racing.