This month has been a great one for people who are subscribed to Xbox Game Pass. There are so many games that I haven’t heard of that I have gotten a chance to try out because of this service! Vampire Survivors is a crazy bullet-hell game that is full of non-stop action. There are so many things I love about this game, the cool retro-inspired graphics, and just the craziness of it all. 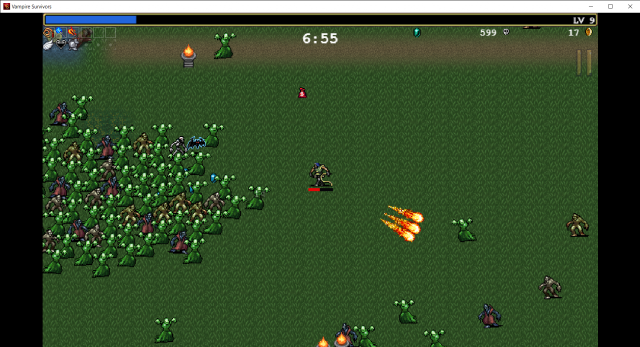 There is no tutorial here so you have to figure this out for yourself, luckily the only thing you really need is the left thumbstick and the button to use your weapon. Based on the title screen it looks like you are wearing a green cloak and you are facing off against Dracula and a fairy type lady. Appearing in the first stage is a huge horde of bats, and your character is armed with a whip to take down all these enemies. You will notice that there is a slight cooldown period with the weapons, but as you collect the blue gems that the enemies drop; your character will level up and will be able to choose one of three different upgrades. Some of the options include making your whip stronger, wearing armour that will lessen the amount of damage your character will take, spinach which makes all of your attacks 10% stronger, or new weapons like knives that fire at the enemy faster. 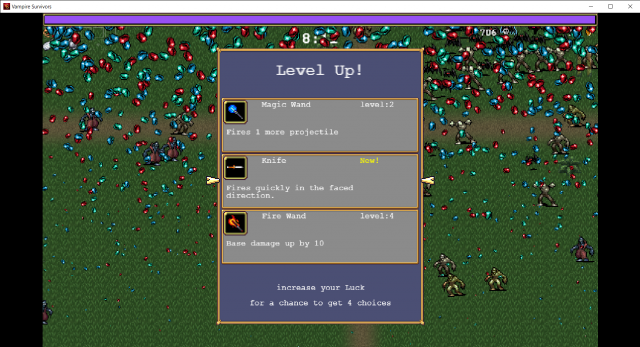 In each of your runs you are constantly attacked by hordes of enemies, some seem easy to beat like bats, but the longer you survive the stronger the enemies that show up to fight you. After the bats, ghosts, skeletons, zombies, and even praying mantis’ will come after you. What exactly you did to all these creatures to make them pissed off I don’t know, but I’m sure they won’t enjoy being hit by my whip, or flame attacks. 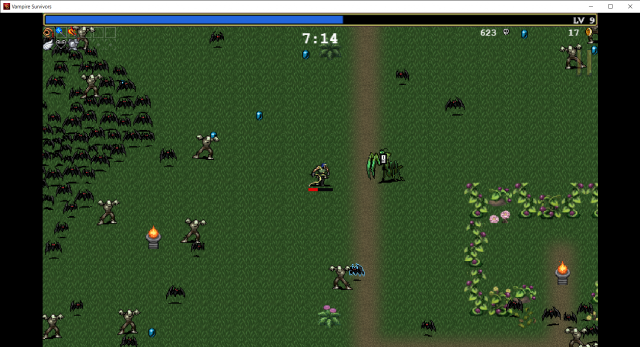 It may seem easy at first because the enemies are moving very slowly; but once 100 or more of these monsters fill your screen at the same time, it is incredibly easy to get overwhelmed. This is especially true if you are trying to collect the blue gems to level up or coins to buy new upgrades it can be tempting to get greedy and make the mistake of running into a clump of enemies. Keep an eye out for any enemies or torches that drop chicken, this replenishes your health so if you can safely grab it be sure to do so because everyone knows that random meat you find on the ground is always good! If you are going to get hit by multiple enemies by rushing in, just wait until the coast is clear or you have cleared a path to get to it; no sense in taking a bunch of damage for an item that will just recover a tiny bit of health. 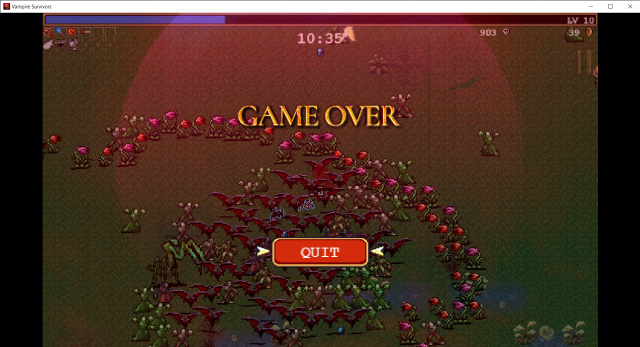 So far I am loving the craziness of Vampire Survivors; the longest run I have had is 10 minutes and 32 seconds, but I couldn’t wait to jump in and try again. As you play you collect coins that you can spend in the main menu on upgrades for your character, so be sure to grab the coins and money bags that you see laying around the level to make yourself stronger. It was a lot of fun trying out all the different upgrades that you can get when you level up, and seeing which of the items I found were most effective while fighting the hordes. If you have Game Pass on the Xbox or the PC I highly recommend you go download the preview for Vampire Survivors, sure it’s not the final game but it is a ton of fun and incredibly addictive! I love when I fall in love with a game I never expected to like! 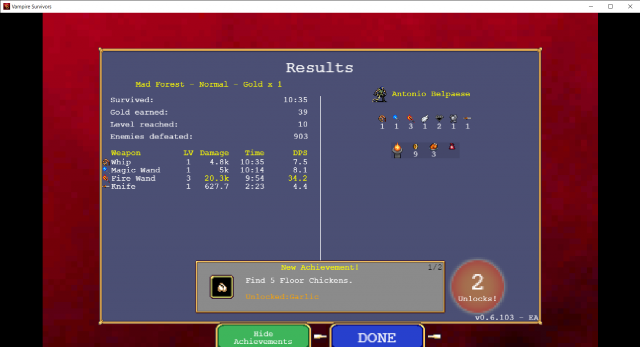