If you put Planetary Annihilation and Command & Conquer into a blender, then added a dash of Team Fortress 2’s art deco aesthetic, you’d probably get Win That War!. The game, by French devs Insane Unity, aims to create a massive persistent universe of RTS combat.

In some distant future, where everyone decides that the 50s and 60s were the coolest era design-wise, a series of resource-rich planets have been discovered. In the ensuing space race, three main factions have arisen trying to gain control of the new system. That’s where the player comes in. On starting Win That War! Each player will have to create an avatar and select one of the three teams. They’re fairly indistinct (apart from some flavour text): the paint job on their units (green, blue or red) being about as fair as differentiation goes.

Win That War! Is a neat-looking game, in that it won’t blow you away visually but has a unique visual style that makes up for any graphical deficiencies that may occur. The game, being Early Access, had a few hiccups, hangups and the odd bug or two but nothing that really detracted from the gameplay. 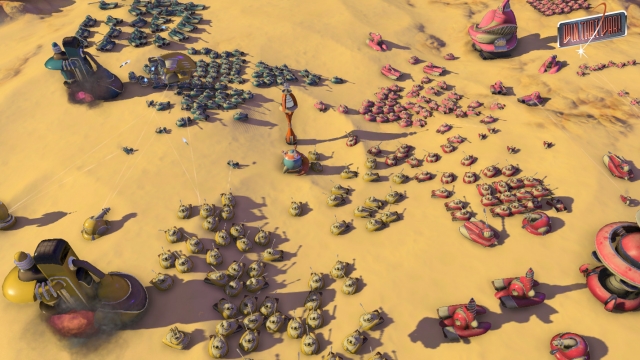 Base building in Win That War! Is fairly simple, once a handy tutorial has given you the basics. You can land a squad of units onto a region of your chosen planet, including engineers, tanks and a moveable home base. Each base building (either your HQ or relay stations) project a ring of influence in which new construction can be done. The technology tree is pretty rudimentary but it means that a player can be up and running within a few minutes without a need for much micromanagement.

Three resources govern your construction and maintenance: electricity, crystal and glowing fluid. The first two are needed for unit and building upkeep. The latter never really had much of an impact during my time with the game. You can gain electricity by building generators. To harvest crystal and fluids you must build outposts over resource points around the region. To nab these hotspots a player must build a relay point nearby. You’re only allowed 4 per region, so careful placement is necessary.

With a base building a fairly simple task, the meat and bones of Win That War! Is the combat. Tanks, turrets and dune buggies can be built in abundance to attack enemy structures and units on the ground, while flying units can be used to gain air superiority and bomb bases. Fights can quickly become huge battles, even when just two players are contesting a region. The population limit per territory per player is 250 units and with each territory able to accommodate 9 players (three from each faction) things can spiral out of control rather quickly. 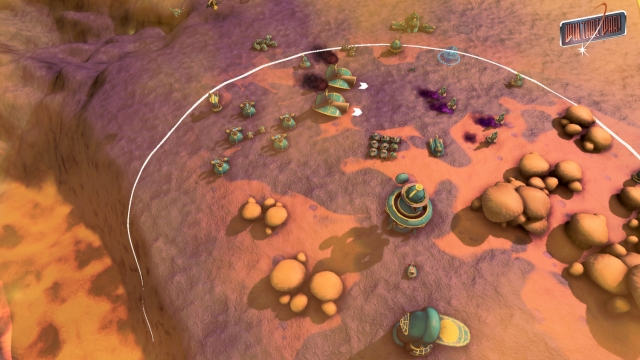 Factions are rewarded for their victories with cash and unit packs. The units can be deployed to the ground when you start a mission and the cash can be used to purchase extra squads for reinforcing your existing squads. Locking down a region by owning all the territories around it keeps enemy factions from reconquering it. Similarly, once a player has taken an area they can retreat back to space with all the units they created on that mission or leave their constructs to be controlled by an AI.

Unfortunately, the game’s Early Access status meant that the European servers were quite deserted. On top of that it seemed that everyone had lumped for the “blue” faction. Already one half of a planet had been locked away by the time I got into the game. Trying to take back these sections as a lone player ended up actually being quite tedious, as I was simply doing the same base-building actions over and over.

Insane Unity has big plans for Win That War! including time-limited critical missions, resource-rich contestable regions, clan-like groups of players and new units and buildings for each faction to use in battle. The ambition is laudable and should the playerbase grow, the game could really be something unique.