Adolf Hitler. Pol Pot. Saddam Hussein. This genocidal trifecta will forever be in the annuls of history, to be beaten only by one mass murdering psychopath. Me.

As I launch another helpless spaceship to its inevitable doom, I stare blankly at the red apparitions of previously failed flights that fill this small part of a much bigger solar system. Astronaut…that’s another career choice that I can comfortably cross off the list.

A puzzle game with a galactic backdrop, 0RBITALIS tasks you with launching ships into orbit in a race against time. With a crisp and minimalist aesthetic, coupled with solid sound design, 0RBITALIS certainly nails the feeling of an infinitely desolate setting. Synthesisers provide the game’s space-y music, and everything from the sound of blasting off to crashing down feels right at home.

Unfortunately, that minimalist approach extends itself into the gameplay. In each level, using the mouse, you sling your spaceship in whatever direction you so desire, with the aim of catching an orbit that will avoid the litany of debris that litters space for the required amount of time. You can control the distance and direction of travel, using the gravitational pull of planets and obstacles as a way to keep on course.

Minute changes to one’s trajectory can often be the difference between instant failure and marginal success, but it is also the source of the game’s biggest weakness. After launching your spaceship, you’re nothing more than an observer, robbed of any involvement. The overwhelming variance in gravity means that a few milliseconds could make all the difference, with incredible patience required to find the sweet spot. Time can be spent meticulously calculating the perfect moment and angle that you believe will result in success, or, if you’re anything like me, strategy and tactics are abandoned for trial and error.

It can be satisfying to watch your spaceship catch an orbit and survive for several seconds, or even minutes, but after a short time, I found that simple guesswork yielded equal, if not superior results, than the tactical strategy I was previous employing. The tedious work required to succeed isn’t met with enough gratification to justify the level of care and time it warrants. There are some hints that ease the frustration, however. The aforementioned red apparitions serve as a stark reminder of your failure, but they also allow for education and progress, providing proof of previously failed ventures thus forcing you to aim elsewhere. A push of a button can also reveal the launches of other real world players, which sometimes provides you with enough information to make an educated guess. 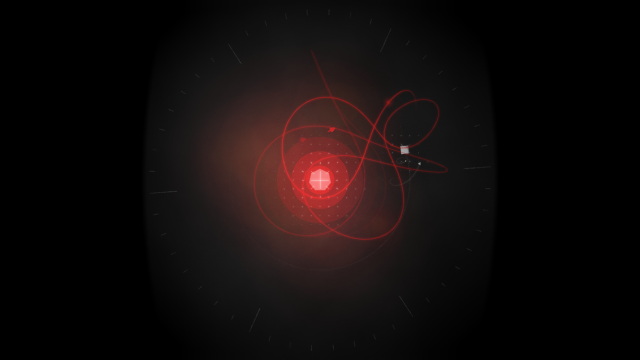 As you might expect, progression is met with change. Difficulty increases, as more obstacles, probes and planets appear. Challenge in games is enjoyable, but in 0RBITALIS, it served only to increase my frustration. 0RBITALIS also totes a level editor, allowing you to mix and match a variety of planets and probes to create levels that are even more complex than those found in the main game. Leaderboards and daily challenge maps also inject some much needed depth and variety to the experience, but, ultimately, playing the game was not satisfying enough to capture my attention for hours at a time.

Fans of the genre might garner some enjoyment from 0RBITALIS, but a quick descent into a trial and error approach undermines the intricacies of the gameplay, resulting in a fairly bland and repetitive experience. 0RBITALIS’ aesthetics are on point, but they alone are not enough to keep me playing for anything more than a few minutes at a time.

Unemployed and with no redeeming qualities, Socrates now spends his days giving you the la-li-lu-le-lowdown on all things gaming.