Airheart - Tales of Broken Wings is a twin-stick shooter with a couple of roguelike elements thrown in. Alongside battling off swaths of enemies, Airheart has a unique and quirky feature that doesn’t necessarily fit the typical model of the twin-stick shooter, and that is fishing, but thousands of feet up in the sky.

Airheart is about a young woman by the name of Amelia, who has left her home to start a new life in a city in the sky called, Granaria. In Granaria, the only way to earn a living and to get by is to sky fish. However, sky fishing doesn’t pay well and is dangerous as deadly pirates roam the clouds looking for easy targets to pick off and plunder. The locals speak of a mythical creature up in the highest layers of the sky called the skywhale. Amelia sets off to find the mythical creature and bring it back home for fame and fortune. 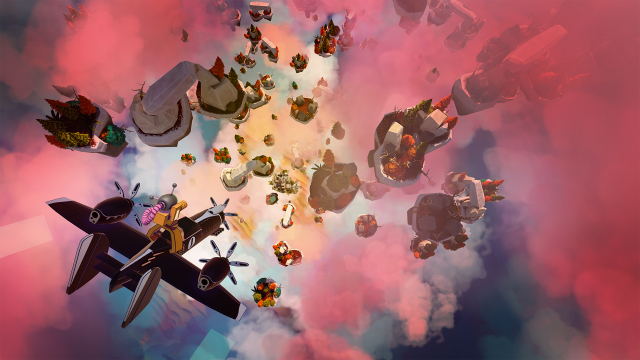 Gameplay revolves around catching fish and bringing them back to your hanger to sell on and generate income. Catching the fish is easy, merely flying into them collects them up, and flying into massive schools of fish, feels very satisfying. There is a downside to this though. Overfishing a sky layer will result in completely wiping out that layers ecosystem, meaning no fish will ever come back to the layer. I completely overfished the first three layers, wiping them all out before I realised what I had done.

Once a sizeable bounty has been caught, and you’ve returned to base, this income can then be used to upgrade different parts of your plane and to buy bigger and better weapons. This cumulates in being able to stay alive for longer to collect more fish, and more significant rewards, with the ultimate goal in getting to the highest sky layer to capture the skywhale. 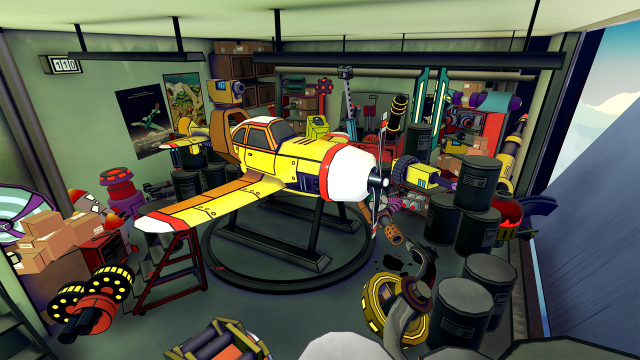 Each sky layer is accessible via a skylift that shoots you further up into the air. Each layer looks fantastic. Small floating islands dot the sky, surrounded by pink and purple hued clouds, really give Airheart an atmospheric feel. However, the higher you go, and the prettier the scenery, the more pirates there are willing to shoot you down. Combat in Airheart is exciting and at times frantic. Using both analogue sticks, one to fly and the other to aim the turret on top works well. There are a variety of enemy types - enough to keep you on your toes. From smaller, nippier planes that ram you, to giant warplanes that are equipped with numerous turrets and homing missiles. Shooting down these planes can also lead to rewards, such as oil barrels and scrap that can be used for crafting new blueprints and items to sell on.

It’s here in these upper layers where you need to be alert and ready. Once low on health, you need to return to base, for if you’re shot out down, you enter a mini-game where your plane plummets back down to the ground below, avoiding the islands and debris in the lower layers. If you crash into one of these islands or miss your base, that’s it. Permadeath. Everything you earned has now been lost. This took me by surprise, luckily I wasn’t too far along in the game, so it was easy to start over. 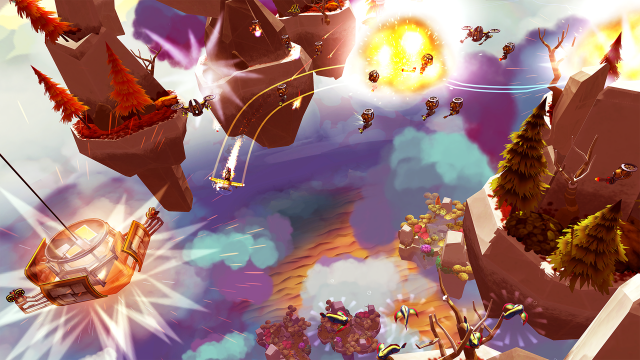 To have any chance of catching the skywhale, you need to upgrade and purchase new parts for your plane. And the parts are expensive. You need to do a lot of fishing to afford those upgrades, and that means a lot of flying in layers that you quickly become familiar with. This grinding becomes very dull, very quickly. There are some small story elements at the beginning of the game, but not enough to drive you forward through the grind, which is a shame. Airheart has some great potential from a narrative standpoint if only it were a bit more fleshed out.

Overall, Airheart - Tales of Broken Wings is a fun and intense twin-stick shooter, that I initially enjoyed. Coupled with its gorgeous visuals and a superb soundtrack, there is a lot of fun to be had. In the later stages, however, the constant grinding becomes a chore, and for some players, they might not be able to get past that. The grinding would have been bearable if there was some other milestone - other than upgrading the plane - for the player to reach, or better still if the story evolved throughout to encourage the player to play on. Sadly, these pitfalls mar the overall experience of Airheart, so much so that in my playthrough, I never did catch the skywhale.

Airheart - Tales of Broken Wings is an intense twin-stick shooter that at times will have you on the edge of your seat. However, Airheart is let down by the vast amount of grinding it takes to reach its endgame, and with minimal story elements peppered throughout, it's hard to see a lot of players following through right to the very end.