I have a penchant for stealth games, there’s something about being able to perfect a certain run or level whilst outsmarting the enemy AI whose main prerogative is to find you. In recent years stealth gameplay has kind of took a backseat, often demoted to a choice or path players can take in open world action games. Aragami looks to put stealth back on the forefront, forcing players to analyse and evaluate their surroundings.

Developed by Tarsier Studios, Aragami thrusts players into a fantasy world in which the protagonist is a vengeful spirit that has been summoned to save a young princess named Yamiko. Currently imprisoned by the Kaiho Clan, the vengeful spirit (also called Aragami), must traverse the world in order to save the princess from her captors. It’s not massively original, but Aragami does enough with the formula to make it interesting.

The world of Aragami revolves around the battle between light and dark, the Kaiho Clan are the army of light, whilst you are a warrior of the dark. It’s an interesting contrast as most would instantly assume it the other way around, it’s a great twist as it adds a sense of intrigue to the story. Having said that, the story isn’t incredibly immersive and feels like more of a backdrop to the gameplay; written in a manner that pushes players to progress through the level. Unfortunately, there’s no real sense of urgency which seems a shame. 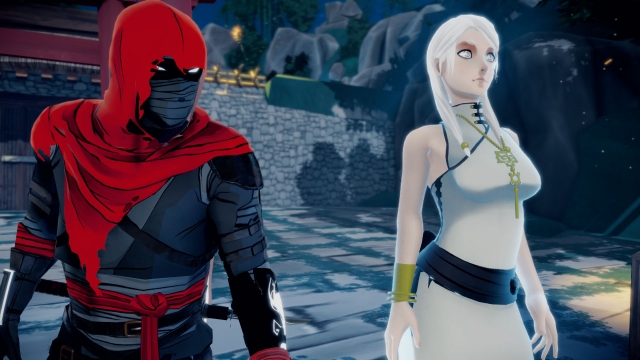 The main chunk of the story revolves around finding several artifacts linked to Yamiko, these serve as great exposition as each one is associated with flashbacks. These flashbacks look to add depth to the lore of Aragami, which is surprisingly deep for what it is; unfortunately I never found myself driven to explore the lore, the narrative never gripped me enough to the point where I felt I absolutely had to delve deeper into it. There were a few moments where I felt the story was heading towards something deeper, hinting there may have been a deeply philosophical conclusion; this turned out to be untrue, which really disappointed me.

The game's major selling point is it’s gameplay; for a game developed by what most would consider is a very small team, the game is incredibly well polished and surprisingly large in it’s scope. The stealth gameplay revolves around using the dark and shadows to both defeat enemies and progress in stealth. There’s a selection of shadow abilities that Aragami can use of which include; warping between shadows, setting shadow traps, shadow projectiles and a few others. They are incredibly fun to use, and Aragami’s abilities can be personalised depending on your playstyle.

When I say playstyle, I don’t mean you can choose to be stealthy or loud; you always have to be stealthy. Enemies can basically one shot kill Aragami if he has been spotted, so you want to spend most of your time not getting spotted. What I mean by playstyle is how stealthy you decide to be. I spent the first half of the game finishing levels without killing anyone or being spotted, that’s generally how I like to play other games in the stealth genre. For clarity I also spent the other half the game being a ruthless murderer, quickly disposing of any Kaiho Clan members that decided to get in my way. There’s a certain level of madness to just running and warping about, slashing enemies and generally being a badass. 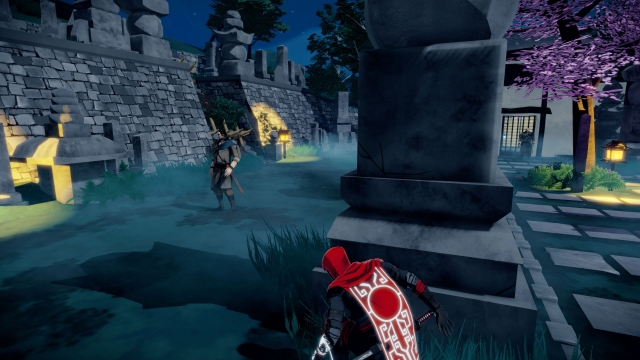 Enemies are generally pretty stupid and stick to their path-finding routine like glue, they might wander towards your direction if you get spotted but there is often shadows nearby you can hide in anyway. The real difficulty comes from the two boss battles that are featured during the game. The one hit-kill gameplay really makes boss battles frustrating as they force players to start the boss all over again. Considering the bosses are able to hit you from any angle, or direction they are facing it actually ends up incredibly tedious. I’d have liked it if Aragami could take more than one hit during these boss sections, it would have made the fights fair and led to me not getting quite as annoyed as I did.

The inclusion of multiplayer is a surprising one, I wouldn’t normally have associated cooperative gameplay with a title focused on stealth. The result can be a little bit muddled at times as two players are far easier to spot than one, but there are moments when you might line up two kills with your partner that end up being incredibly cool. I really appreciate the fact that you can carry your characters abilities into another person’s world, it gives you a real sense of ownership over your character.

The game is stunning, it’s a great example of excellent art design over graphical clarity. Light and dark are really well differentiated and primary colours are incredibly prominent, creating an incredibly vibrant environment. Characters look a little off sometimes, but that might be down to how contrasting the environment is, so it really accentuates the outline of their bodies. 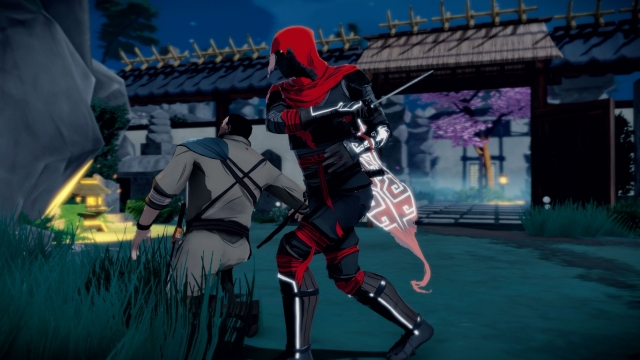 I have to mention how awesome it is that the developers have included the option to turn off V-sync and change the FOV, it’s a small feature that I wish more developers would include on consoles- especially the FOV slider, it’s game changing.

Aragami is a great game; the story isn’t amazing but it’s definitely far from the worst I’ve ever experienced, what really does stand out though is just how great the gameplay is. Abilities are fun to use, and the stealth feels fluid. For those wanting a game where stealth is the focal point, and not a subclass you choose, Aragami is most definitely for you. Just hope the developers patch the boss battles as they are currently hell to play through.

For those wanting a game where stealth is the focal point, and not a subclass you choose, Aragami is most definitely for you.