Archvale is a bullet hell RPG, developed by idoz & phops and published by Humble Games. You play as some kid, who was dropped into the world with only the clothes on their back. Go grab a wooden sword, and fight against the forces of the Undying guardians to unite the world with the fabled Archvale. The story isn’t all that complex, and it doesn’t need to be. Archvale is all about the gameplay. And it’s good. Really good.

Now, going into Archvale, I was expecting a sort of roguelike or Enter the Gungeon type of game with randomised elements and the like. However, I’d compare it more to Zelda, with set dungeons, chests to open, and platforming puzzles. This game encourages exploration, with a variety of items to obtain and mini-bosses to fight. And you’re usually rewarded with new weapons, a fountain, or even a Mega Plum, which boosts your healing potions’ effectiveness. Once you obtain your first piece of the Archvale and obtain bombs, the world opens up and allows you to tackle it in any order you want. It’s a little overwhelming, but I welcomed it with open arms. 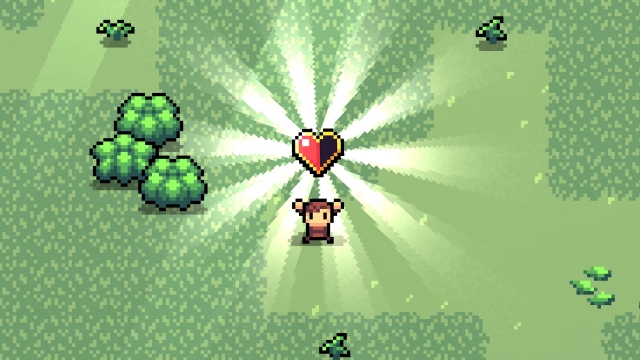 I like that you don't need to assemble a full heart container to increase your health.

You don’t really level up in Archvale. You instead obtain better equipment and little stat boosts throughout the world, like heart containers and defence boosters. There is a crafting system, with various materials to obtain to make weapons and armour. The fountains scattered throughout the world, not only allow you to fully heal and restock your potions, they act like fast travel points which makes exploring the world that much easier. They also respawn all enemies, which is useful for grinding money and crafting materials.

However, don’t think it’s going to be a walk in the park. The bosses and even normal enemies can seriously give you hell as you travel around the world. Bees explode with bullets, skeletons will swing around flails, and bandits have burst-fire crossbows—and you might be facing all of them at the same time. The few healing potions you have not only take time to drink, but leave you vulnerable. Even on Normal difficulty, I was getting pretty beat up and hoping that I could find a fountain soon. I’m not the best at bullet hells, but this one forced me to get better. Knowing when to dodge with a dash is crucial to surviving in Archvale. Although, dying isn’t all that punishing; you lose gold and respawn at the last fountain you used, but it’s still a pain to travel back to where you were.

Every weapon you find or craft feels different. From swords and bows to bags of knives and fire spells, you are given many options on how to fight. Breaking down the weapon types, melee weapons are short-ranged but deal more damage. Playing smart and knowing when to pull them out is a must. Ranged weapons deal damage from a distance but are weaker. I prefer ranged because it gives me the distance I need to dodge, while also allowing me to deal damage. Magic is a little special. It starts out pretty weak with middling range, but collecting magic shards that drop from enemies boosts their attack power and rate of fire for a limited amount of time or until you get hit. They’re all really fun to use and play with, so don’t be afraid to experiment. And, with an upgrade system, no weapon really falls behind. 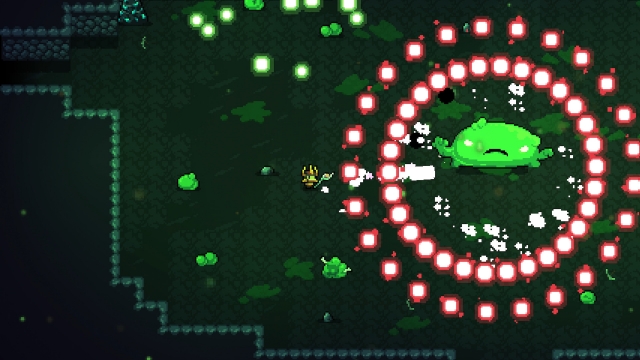 Its not called "Bullet Hell" for nothing...

There are trials that test your dodging ability, and they get difficult fast. There are three levels to each trial, and you need to grab a blue prism 10 times without getting hit in order to complete each level, and that is easier said than done. Even on the first one, I felt like I was concentrating a lot more than usual on the game, and by the third one I was tightening my grip on my controller as I kept screwing up, even though I know the trials are possible. You do lose health upon getting hit, but at least it won’t reset you back to the first level of the trial unless you leave. I think that added stress is a little helpful, but I did find myself instantly failing sometimes just due to bad luck. The reward for completing a trial is a badge, which is always fun to obtain.

Speaking of which, badges are items you can find that affect your abilities in various ways. There are ones that boost your stats, give you an extra heart, or cause your arrows to curve. They’re fun to use but are limited by a point system. This allows you to equip as many badges as you like, but each badge costs a certain amount to equip and you’re limited by your available points.

In terms of performance, it’s completely smooth. I’ve suffered no drops in frames, glitches, or any load times now that I think about it. The game is extremely polished, I can’t really find any hiccups here. 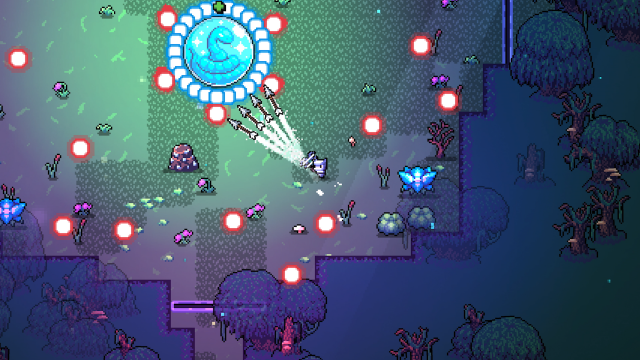 You've got this. Probably.

In summary, Archvale is just plain fun—There’s nothing more I can really say about it. It’s great, and you should pick it up. It's an engaging bullet hell that does what it does well without any bells or whistles that detract from the experience. And if you suck at bullet hells, there is an Easy difficulty. I cannot recommend it any more, and why are you still reading? It is available on Steam, the Nintendo eShop on Switch, and the Xbox One.

Archvale is just plain fun. It does what it does well, and as a bullet hell provides a serious challenge without feeling unfair. I cannot recommend this game enough.