Games like SimCity and Cities: Skylines can be just a bit too demanding sometimes. Planning out complex roads maps, the balancing of budgets and the constant nagging citizens moaning about taxes. If you’re not in the mood for the stresses of all that, for one, don’t run for public office, and two, how about trying BalanCity? It offers a very simple version of a city management game combined with a unique tower stacking twist.

BalanCity is an easy game to grasp.There is a finite amount of land that sits teetering on a pillar. Your job as mayor is to build up the population while taking care of your citizens, and keeping the physical balance of your city. Placing too many buildings on one side of the piece of land and it will topple over, destroying your city, killing thousands of your denizens as well as your hopes and dreams of being re-elected next term, but that’s ok. With each game lasting around ten to fifteen minutes, you can lord over a freshly built city in no time!

To get things started, you need to build apartments for your citizens, office buildings for them to work in, and a power plant to provide electricity. Balance is key here, so think carefully where you’re going to place these buildings. Building too heavily on one side of your land will cause that side of your city to dip, potentially knocking over a set of neatly placed apartment buildings into the neighbouring office block. As what happened to me on numerous occasions. Slowly watching my city teeter, and buildings start to slide is an exciting yet agonising experience. 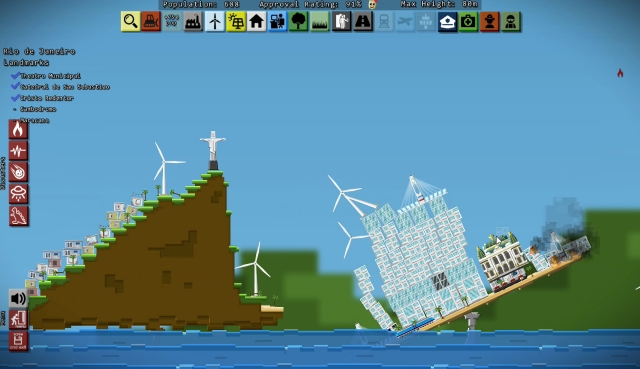 This instability of buildings can be combated however. If you build four separate office or apartments together, they turn into a larger block. Stack three of these blocks together along with an elevator placed next to it, the blocks will merge into a towering skyscraper. This is the key to building up a thriving population. It’s this simplicity that makes BalanCity fun and accessible. Having blocks combine together automatically adds more pace to each level by not having to bulldoze pre-existing buildings to make way for a skyscraper.

At the start however, you can’t just begin building skyscrapers. There is a height limit that is only raised once you hit a certain population number, and place a civic building. These civic buildings are usually irregular shapes and very heavy, which can take up large amounts of space on the ground, or completely upturn the play area. This is where BalanCity throws in a little variety and makes things a bit more challenging. I found it extremely satisfying finding a place for an awkwardly shaped building, complete with spires and domes, and not witnessing my whole city flip-turn upside down.

Eventually though, your citizens’ needs get slightly more demanding. They start screaming for things like universal healthcare and security, meaning you have to build hospitals, police stations and fire stations. Each one of these services comes with a helicopter that you can direct to either put out a fire, or tackle a robbery in progress. This adds in a little mini-game of sorts, but is also very tedious. Most of the time I spent playing BalanCity, it was spent directing helicopters to various incidents, which is fine to begin with, but the fires, muggings, injured citizens and riots just seemed relentless. To make your life as a public servant even harder, you will often come up against some sort of disaster. These can come in the form of earthquakes and meteor strikes, but also aliens or monsters might decide to invade your neatly stacked city. Military bases and turrets can be deployed to fight off the alien invasion or the rampaging giant lizard on screen. This is where I found the action really start to ramp up. Disasters can cause buildings to topple and fires to spread, meaning you need to act quickly to put out those fires and stop your city from tumbling into the abyss.

BalanCity offers up a few different game modes. Missions, Scenarios and a Free Build mode. Missions come in the form of either simple situations where you need to build enough power stations for the citizens of a previously abandoned city, or it can be something as crazy as having the gravity reversed and being tasked with creating a new one.

Scenarios closely mimic cities from across the world. London, Rio de Janeiro and Tokyo to name a few. Each of these cities comes with their own unique set of civic buildings in the shape of its’ own landmarks. The goal in Scenario mode is to build all of the city’s landmarks In the London scenario, expect to find yourself building landmarks like Tower Bridge and Big Ben. Free Build is exactly that. You are free to build until your heart’s content, or until aliens descend and raise your city to the ground.

These different game modes do try and add a bit of replayability to BalanCity. However, it isn’t quite enough. In total, there are only five missions and twelve scenarios. These will not take you a long time to complete. Roughly ten to fifteen minutes on each one, with the exception of the flipped gravity level, they might not even hold your interest for long.

Overall, BalanCity is a fun and enjoyable experience that offers something completely unique. A very simple game that at times will have you on the edge of your seat. A lack of replayability and variety in the overall design of the game, does make BalanCity a bit tedious. If you’re looking to kill ten minutes however, BalanCity is the game for you.

A solid, tense and enjoyable experience which is perfect if you have 15 minutes to kill. A lack of overall design and the small number of different levels however, might not keep you interested for long.