Dungeon Masters, 10-sided dice and complex character sheets; the world of Dungeons and Dragons (D&D) is one that intrigues as much as it intimidates me. The idea of gathering some pals, forming characters and taking them on endlessly dynamic, shared adventures sounds fantastic. Unfortunately, I have neither willing friends nor the patience to learn D&D, and likely never will. Don’t feel too bad for me though, because Beamdog has polished up and re-released Baldur's Gate, a videogame simulation of an epic D&D campaign for PC, Mac, Linux, Xbox One, PlayStation 4, Switch and Mobile —basically anything with a screen— and I’ve had the chance to play through it! Here’s the layman’s review of Baldur's Gate: Enhanced Edition. (Played on an Xbox One X)

Before we jump into the game itself, let's discuss what “Enhanced” means in this game’s title. Baldur’s Gate —the original— came out way back in 1998, needless to say, it isn’t easy to get running on modern hardware. This re-release serves as a way to preserve the game so current and future generations can play it while adding quality of life improvements, tweaks, resolution upscaling and some new content including the Black Pits adventure and a few new characters. Make no mistake, this isn’t a remaster in the same vein as the glossy Crash Bandicoot N. Sane Trilogy. It looks very much the same as it did in 1998: which is to say, like something you’d clean off the sole of your shoe. That sounds harsh, but the dated graphics soon become irrelevant as the game gets its hooks into you. If anything, it helps to draw attention to the stellar writing, but more on that later.

Upon starting Baldur’s Gate, you’ll be asked to make a character under the D&D framework. If you were so inclined, you could painstakingly assign attribute points and lay the groundwork for the precise class, build and backstory of your hero. As mentioned before, I couldn’t have less experience with D&D or creating characters within its rule-set, so I opted for a premade Ranger and gave him the title: “Dirk Thruster”. With a hero finely crafted or —in my case— chosen almost completely at random, you can finally begin the adventure. The hero, (you) a young, inexperienced orphan of unknown origin, lives a sheltered life in the grand scholarly settlement of Candle Keep, under the care of wise old sage Gorion. One day, amid rising regional tensions and what seems like inexplicable attempts on your life, Gorion orders you to join him in fleeing your lifelong home. A series of surprising and mysterious events leave you separated from Gorion and alone in the world for the first time. Short on friends, money and experience, you must brave the dangers of The Sword Coast to make a name for yourself and get to the bottom of the mysteries surrounding your past and the previous few days’ events. 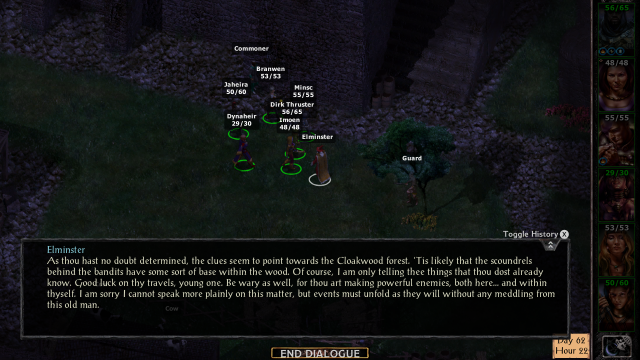 Early on, Baldur’s Gate is a slog to play for the inexperienced player. The myriad of D&D specific systems, roles and contexts combined with the lack of streamlining that comes with being an older RPG means that you’ll need to do a bit of homework to get the most out of the experience. If you set aside the time to learn the game and the rhythm of combat, it’ll soon feel natural. Believe me, I didn’t think it would either. The hours following your escape from Candle Keep, the tutorial area, will see you wandering the wilderness and beginning to gather a party of fellow adventurers out of the predictable archetypes: mages, warriors, thieves etc. This —I feel— is the real tutorial, where you’ll take your first independent steps and get a feel for the game as a whole before the main quest even rears its head.

I brought up the graphics —or lack thereof— earlier on. Yes, Beamdog could have given everything a new lick of paint and helped the graphics live up to today’s standards, but that would betray what makes tabletop gaming special. Even I know that games like D&D endure to this day by utilising player imagination, the adventures players embark on are deeply personal in a way that fictional media can’t quite capture. Beamdog clearly understands this, by keeping the original graphics intact, it invites players to use their imaginations in bringing the world to life. Of course, it helps that the writing is surprisingly engaging and gives the imagination ample material to run with. My eyes tend to glaze over when faced with stories set in D&D-esque fantasy worlds, and I was concerned that Baldur’s Gate would lose my interest like countless comparable games, books and films that came before it. I needn’t have worried however, the writing is truly the star of the show and drew me in to the characters and events of the story. What sets Baldur’s Gate apart from so many other fantasy tales is the fact that it remains grounded. You’re never bombarded with walls of indecipherable fantasy jargon, the characters are distinct and relatable —especially the party members— and the main story stays relatively low-stakes for a refreshingly long time. Going from zero to world-ending catastrophe without appropriate build up is a good way to lose the interest of an audience and Baldur’s Gate avoids this. Crucially, the game maintains a sense of humour throughout that —I'd imagine— recreates the silliness and sense of self-awareness of a group of friends gathered around a table playing D&D for real. You really get the sense that this title was created out of a passion and understanding of its source material.

The main story provides a constant through line in Baldur’s Gate. It’s the backbone and a pretty good one at that. As with any good RPG however, the side-content will take most of your time as well as present you with some of the game’s more interesting moments. The game world is made up of a few dozen different hub areas that you gain access to gradually over the course of the game. Through exploring these you’ll encounter an array of characters, locations and creatures with which to bulk out your adventuring portfolio and gain valuable experience points for your party. Memorable encounters from my playthrough include helping Melicamp, a novice mage, return to human-form after an accidental chicken transformation; taking sides in a local feud between a family of farmers and the daughter of a deity; and the epic, multi-level dungeon of Durlag's Tower, one of the game’s most significant challenges and lucrative locations in terms of high-level loot and gold. Baldur’s Gate is more of a questing simulator than anything else, and the game’s at its best when you ignore the main story to explore and embrace the spirit of adventure. Up to this point, I’ve been forgiving of how Baldur’s Gate: Enhanced Edition stays true to its roots and doesn’t conform to the standards of modern gaming. At times, it helps the experience greatly: for example the lack of quest markers gives you a greater sense of immersion and encourages you to actually pay attention to in-game instructions. With that said, there are times when the dated aspects of the game can drag down the overall experience. Most of the dialogue is conveyed solely through text, however there are a handful of actual recorded lines that repeat themselves over, and over, and over again. This becomes especially irritating in the case of your party members, who —due to never leaving your side— will utter the same lines hundreds of times over a full playthrough. The inventory management is another chore to deal with for a whole host of reasons: no item comparisons, no auto-sorting, item stats aren’t always clear and —with a maximum of six party members— there’s six separate inventories to manage, which makes the task of assigning different items to their appropriate characters an endless bore.

Baldur’s Gate: Enhanced Edition is a re-release that understands and preserves what made players hold the original in such high esteem. It captures the spirit, spontaneity and humour of playing tabletop RPGs while providing enough guidance to accommodate those who’ve never touched a set of dice their lives. There are a few preserved elements that only serve to irritate and should have been updated, particularly when it comes to inventory management. For the most part however, Baldur’s Gate has been left intact and is allowed to shine as a gaming classic. New players needn’t be scared away, with a small amount of patience even D&D beginners will find a rewarding experience here.

Baldur’s Gate has been left intact and is allowed to shine as a gaming classic. New players needn’t be scared away, with a small amount of patience even D&D beginners will find a rewarding experience here.

Not to seem skeptical, but to experience the D&D feel, Neverwinter Nights runs perfectly well on Windows 10. For even a more classic game feel, both Grimrock and Grimrock 2 also work. This rehashing a Baldur's Gate just seems to be just a lame attempt to cash in on a sad re-release of a game that is obviously passed it's prime.