We’ve had some amazing settings in videogames over the years: from the fantasy continents of Tamriel and Thedas to the recreations of real world cities as seen in the Driver and GTA games. We’ve seen wonderous apocalypses and the dawn of civilisation. But nobody has ever set a game in the southern English town of Basingstoke, presumably because - as one mumsnet user put it - “it [is] horrifying”.

That same comment called the town deserted, and Puppygames took this idea and ran with it. Basingstoke - the game, not the town - is set at the end of the world. This particular cataclysm is caused in a similar way to Half-Life - a science lab experiments with something that they don’t truly understand and aliens come to mess up their day. These aliens also somehow infected some of the probably-deceased victims of their invasion, and so there are plenty of zombies walking around.

This is England, however - we don’t have guns just lying around. Our Second Amendment is probably about tea or crumpets. Basingstoke is, therefore, more of a stealth game, with mostly melee weapons. These are mostly ineffective against the enemies, and they break rather easily so I found that keeping stealthy was the best bet for success. The ranged weapons do include a few guns, but these are limited to places where it actually makes sense in England. There was a slight overabundance of nail guns, flashbangs, Tasers and dynamite, though I live more northerly than the real Basingstoke so maybe they have those down there. 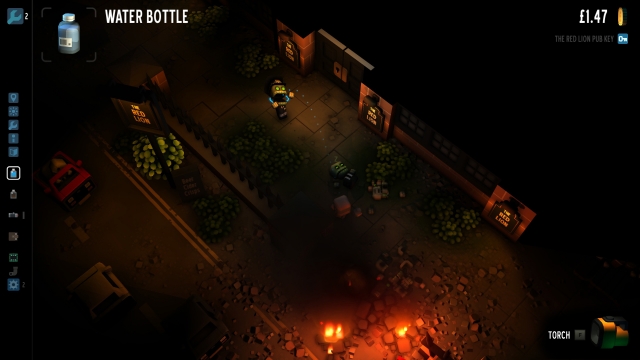 The real weapons, in my opinion, are the sausage rolls. Or the food in general, but between a sandwich and a sausage roll, I’m going with pastry pork every time. So do the zombies, as throwing out any food is a quick way of getting them off your scent. This does only work for a few seconds as that food will get eaten, and if you’re still around the zombies are coming for you. For something a bit more drastic, you could throw an unidentified fruit at the zombies to instantly kill them - for everyone knows alien zombies are deathly allergic to fruit.

The downside to all of this is the aiming system. Due to the perspective, I found aiming any of the ranged weapons to be hit-and-miss. The food and grenades were fine, since they only needed to travel in one direction, but anything that I actually wanted to hit an enemy was a big risk to use. The nail gun was hard to use, as the only ranged weapon in most levels that could kill most of the enemies it sprayed far more than any nail gun I’ve ever fired. It also fired a lot faster than any nail gun I’ve ever seen, but the reload time of what felt like 16 minutes restores that realism.

The stealth is really well done. Basingstoke is almost entirely bathed in darkness, and you have to navigate with a torch. The torch will attract the enemies though, so it really needs to be used sparingly in places that the enemies hopefully aren’t. Just because you’re in darkness doesn’t stop the enemies finding you though, as they can hear your footsteps. When walking over certain materials, the game shows a soundwave that will alert enemies to your current location. 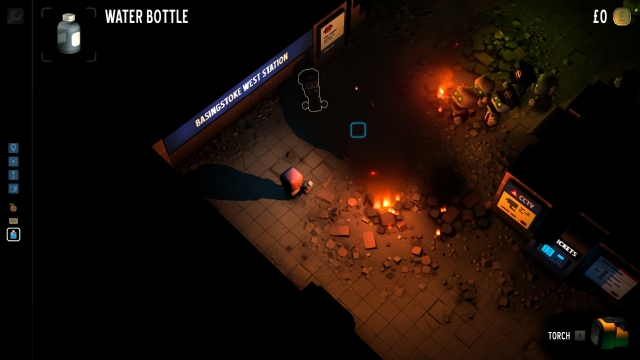 The enemies are also very persistent. Once they get your scent, you have to distract them and get far away. Even then, they are probably going to chase you - though fortunately much slower than you can run. This speed difference is boosted by an ability to vault over some scenery, such as ticket barriers or low fences. This can be a bit awkward to pull off, as you have to be directly facing the barrier to get over it - I died a lot trying to get into a train station without buying a ticket. To which end, I think someone needs to let Puppygames know that the London Underground stops at Morden, which is 50 miles north-east of Basingstoke.

As a stealth game, I literally can’t think of anything like Basingstoke. It uses its setting in a clever way, keeping the combat opportunities to a minimum and a strong focus on the distraction mechanics. The aesthetic of everything is spot on, especially the false tube stations and all the road signs. The stealth is definitely the game’s strongest mechanic, but the weaker mechanics only serve to make you appreciate Basingstoke’s strengths.

A stealth apocalypse game that stays takes some liberties with its setting, but brings it all together with strong mechanics that keep the player feeling vulnerable.