As soon as you start this game you are presented with a disclaimer stating that "no one under the age of 18" is allowed to play, and viewing or usage of this game is strictly prohibited, so I think that gives you a good idea of what the content of this game is like. 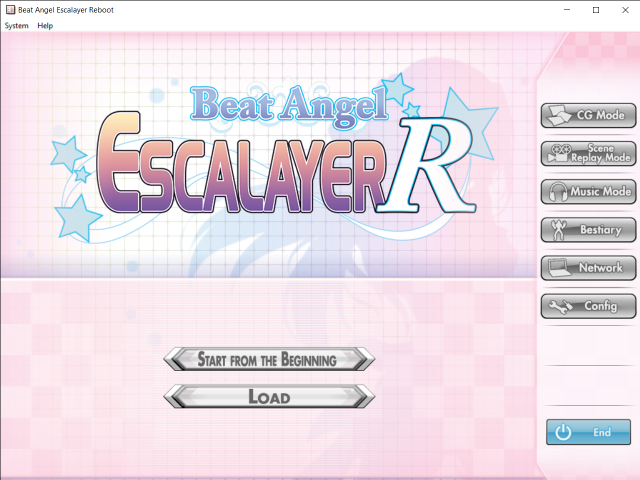 I definitely did not know anything about Beat Angel Escalayer Reboot before I started playing it, besides thinking it was a visual novel. Luckily there is more to it than just sitting and watching, once you get through the prologue that is. Once you do, then you start to get the ability to interact with some of the other characters and make choices to influence the story. This is definitely an eroge, so knowing that let's move on. I’ll try to explain some of the stuff that is going on in just the prologue, and leave the rest of the game for you to experience yourself.

The game starts right with the action, as Kyouhei gets frisky with his childhood friend Sayuka Kouenji, though he claims that he has a crazy reason for it. Throughout the prologue we hear Kyouhei trying to justify his actions. The thing is, the main character is quite unlikable most of the time and he’s frankly, a jerk. There is a flashback that shows us how they were childhood friends, until Sayuka’s family had to move far away because of her dad’s job. Kyouhei used to bug and tease Sayuka all the time when she was a kid, like putting hot sauce in her strawberry juice, or even going as far as pulling down her skirt in front of a huge crowd of people. 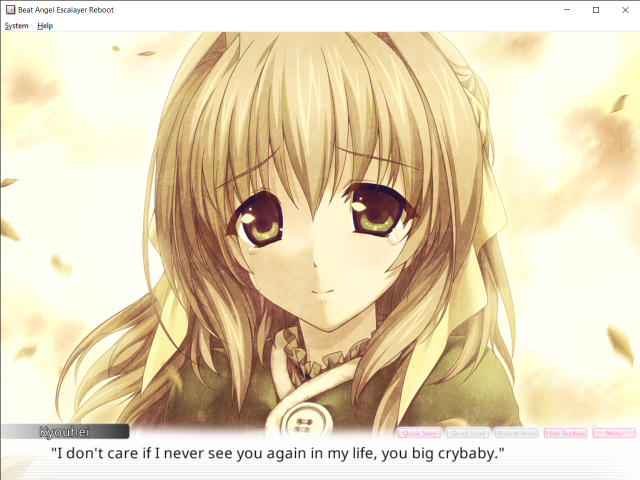 Fast forward 10 years and we see that Sayuka’s family has moved back to Kannuki City and even moved right back to the empty house that has not been occupied since they had left. She is attending the same school as Kyouhei, Ichijou Academy. Kyouhei can’t believe that she is back, so he makes sure to wave and say "hi". He is really upset when she claims that she doesn’t remember him. He wonders how can that be possible after all the stuff he did to her? Maybe she is trying to forget all that and just claims that she doesn’t remember. So Kyouhei, being all creepy like, stands outside of Sayuka’s house, just staring at it.

A girl with bright green hair comes and asks why he is loitering and acting so suspicious. She says that she is Sayuka’s younger sister and she knows who Kyouhei is, though she claims that her sister has never spoken about him. Things are getting odd, how is it possible she would know him? He turns to leave and notices that in the night sky there is a spot that doesn’t have any stars, it is totally dark. There must be something weird going on.

While Kyouhei is trying to get this all sorted out, we see on the news that there has been a report of a group of darkly clad individuals vandalizing products at several stores in Kannuki City. They were spraying dark ink all over the stores, and no matter what the police did they could not stop the group. Luckily, a lone female appeared causing the group to disperse. There is an ongoing investigation to find out where the group was from and who the lady was that stopped them. The other news story that is reported is on an organised crime syndicate that is behind the disappearances of many scientists around the world. There must be a reason why they make sure to tell us these news stories. It may not make sense now, but guaranteed it will come up again later.

The next day at school, Sayuka tries to ignore him, though he is persistent and she claims to not remember him at all. Suddenly there is a large explosion, causing all the nearby windows to shudder. Everyone is running towards the cloud of smoke and sees a large shallow hole with a ground of people standing beside it. These people claim that they are from Dai-Lust, an intergalactic empire that wants to add Earth to their planetary colony. We see Sakuya run off, so of course Kyouhei runs off after her. She runs into an old building, and when he follows, he sees Sakuya pleasuring herself. For some reason, the thought of Earth being invaded seems to turn her on. I don’t want to spoil anything, but there is a Sailor Moon esque transformation at one point, because Sayuka is actually a heroine named Escalayer. After she is “finished” she runs off to battle against the Da-Lust invaders. While she is fighting, all that is shown is a still image with narration, not an animated cutscene. 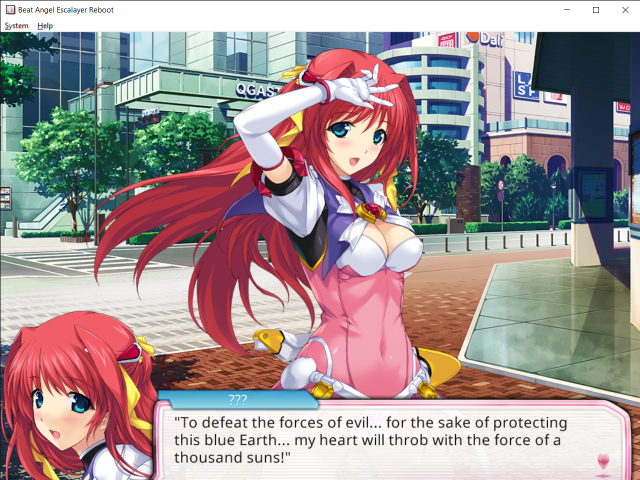 After the battle is when things get strange, not that they weren’t before but even more so. Madoka, Sayuka’s little sister, starts begging Kyouhu to have sex with her sister everyday. She reveals that she is actually a cyborg and her sister has been put into a bio body, which essentially makes her a mechanised weapon to fight off the Dai-Lust invaders, since her dad is a scientist and saw the future. Catch is, it has two hearts, one normal and the Dynamic ba-Dump Dynamo which is called DDD for short. This is activated whenever Escalayer is aroused and can stock the energy for later use. So her dad is apparently kinda creepy and perverted.

At this point in the game you haven’t done anything yet besides watch the visual novel. Once the prologue is done that’s when you actually start playing the game, making decisions, battling and leveling up Escalayer. When you are busy “lovemaking”, the actions are determined by a dice roll, not just the player choosing everything. I am actually surprised there is this much time spent on a story. I figured there wouldn’t be much of a story at all and it was basically just a visual novel. The sound effects are done well, and the artwork is nice, though it’s too bad the fights weren’t animated. If you are into NSFW games like this that actually have a story, Beat Angel Escalayer Reboot is definitely worth checking out. If you don’t want a story to go along with the action, you may want to skip this one.

If you are into games like this, Beat Angel Escalayer Reboot has a good story and sexy heroine. If you don’t like too much story in your games, you may want to pass.