It is ironic that the artwork behind Beyond Eyes is so beautiful, when it is a game based on the concept of blindness. Rae is a vivacious young girl who falls victim to a firework accident early in life, resulting in the loss of her eyesight. The story is told exactly like that - as a story, with curling script appearing on screen much as it would appear in a children's storybook. Following the accident, Rae withdraws into her sad, lonely little world in her garden. She becomes fearful of loud noises and unfamiliar places, but her garden is safe, and quiet, and familiar. 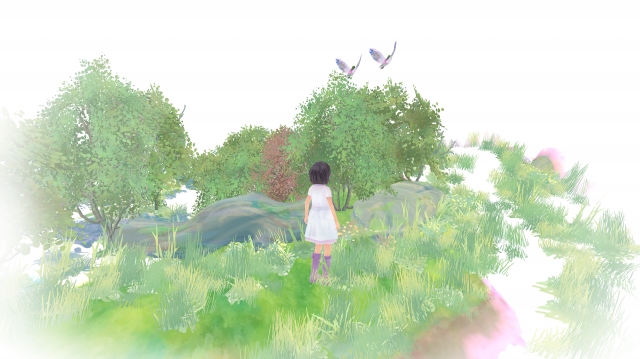 That is, until a fat ginger cat with a jingling bell on its collar walks into Rae's life. Rae names the cat Nani, and the cat slowly draws Rae back to life and happiness. Until one day, Nani doesn't visit. The seasons change and with no sign of Nani in the garden, Rae takes matters into her own hands and walks out of the gate and into the world in search of her only friend.

The world around Rae swims into life as you take step after step; her imagination literally "paints" the scenery into being. The environment is a blank and endless white expanse, until, like a watercolour painting, Rae uses her senses to create a visual world. Rather than a terrifying black nothingness, Rae's world is therefore more like a canvas waiting to be filled in, full of potential and child-like curiosity. Her fingers reach out tentatively to brush against walls, buildings, and obstacles as she walks near to them. She walks slowly. The only sound is the song of birds, and her regular footsteps. As birds perched in trees sing, the bird and the branch they sit on pulses into sight as Rae picks up on their sound waves, and falls back to invisibility until they make another sound. In the distance, a church bell rings and you catch sight of the belltower as Rae's mind conjures up its likeness. You understand that you can only see what is on the screen because Rae imagines it to be so.

And as such, she is often wrong. What appears to sound like laundry flapping in the wind turns out to be a leering scarecrow. What Rae thought sounded like a woodpecker on a tree becomes a traffic light next to a dark and dangerous road filled with invisible traffic. Hidden dangers suddenly loom up at Rae from shrouds of darkness, and she whimpers and pulls her arms in on herself in fear as the colour on the screen becomes pale and sharp, tainted with terror. There is very little dialogue in Beyond Eyes, besides Rae's occasional hopeful call of "Nani!". Instead, you are forced to feel along with her, as the colours and Rae's movements and body language change to reflect her anxiety and uncertainty. 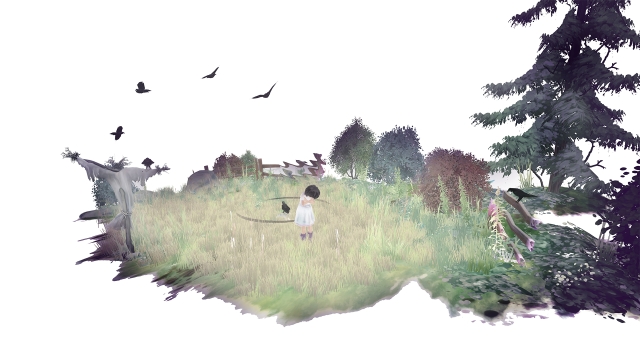 There is never any real sense of danger in Beyond Eyes. Rae's fear becomes a swirling black barrier preventing her from moving onwards, forcing you to turn around and find another way to continue. Your awareness of environment and direction takes on a whole new level though, as you teeter around, arms outstretched, feeling your way. Walls and obstacles materialise in front of you, forcing you to follow a wall or a fence until you come to a stile, a corner, or an opening. You find yourself listening for bird songs and searching for edges which you can follow, using the lines of the world around you in the way a blind person must.

The pace is slow - obviously a blind child can't sprint or run safely. Your every step is tentative. The grass and flowers don't so much rush into being, but slowly sweep under your feet. Sometimes, buildings don't erupt in front of you until you've already bumped into them, or bridges don't appear until you take a step of faith over a stream to see if you can cross. You are discovering what lies a step ahead as Rae does, and her fairy tale world unfolds piece by piece. But now and then, Rae imagines Nani has trodden the path before her, and 'sees' in her mind's eye his imaginary ginger form trotting along ahead, encouraging you, the player, to persevere.

Although Beyond Eyes appears simple in objective, I think it is about much more than simply finding Nani the cat. It is about changing your entire perception. You step into Rae's shoes, into the world of an innocent child with a mind full of storybook wonders, who learns on her journey that the world isn't always as beautiful as it seems. Her bravery, conquering an endlessly blank world for her friend is touching, and the game stirs something in me as an adult - a protectiveness for Rae, sympathy, and wonder. On the official website, Tiger & Squid suggest that Rae finds the bravery to venture on her journey "with the guidance of the player". The player's role, indeed, feels almost parental - you are Rae's eyes, Rae's guide, Rae's protector. The slow pace and emotional context means that Beyond Eyes isn't exactly a thrill ride, but it is engaging, and it leaves you staring at the credits screen with different eyes to the ones you began the game with. 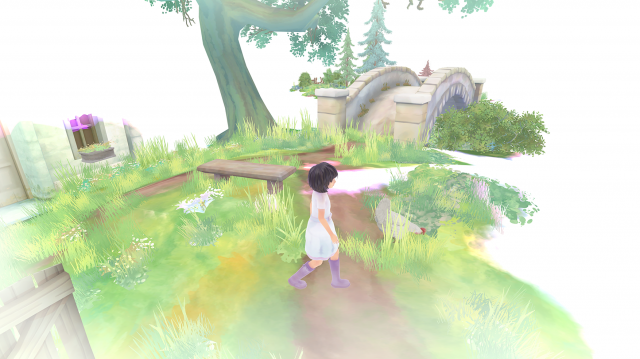 It is remarkable to note that Beyond Eyes originally has a single, female developer - Dutch graduate, Sherida. The game began as part of a final year project for university, in which Sherida set out on a mission to create a "meaningful, emotion driven game without stripping away all gameplay elements".

Beyond Eyes (Reviewed on PlayStation 4)

Although it isn't the traditional, fun-filled kind of game most people would look for, I recommend this one. It's more like an interactive work of art, but it's well worth it. Put aside your expectations, and let yourself be guided through Rae's world one step at a time.

I meant to pick this up, it looked like a really nice change of pace when I saw the teaser trailer.