Blackwood Crossing is a first-person adventure game that is storydriven and has you controlling the main character named Scarlett as she progresses through a train solving puzzles, learning more and more about her brother and the changes that he has been going through. The main objective of the game is to explore the train and to explore the environments as you learn about characters and solve puzzles on your way. A huge problem that I saw with one of the puzzles was that there was no context to the solution. Basically one of the early puzzles has you collecting photos which has a secret language on the front of the photos (this is a language that Scarlett and her brother Finn made when they were younger). Basically the puzzle has you solving the sequence but the pictures do nothing in terms of telling you how the language would work or how the sequence should have been, 15 minutes after I found all the photos I ended up searching a YouTube walkthrough to find the correct solution. So as I have mentioned above, this is a story about two children who have no parents and are instead living with their grandparents and how they are growing apart. The story starts off with you playing a simple game on a long train ride which suddenly turns into a dramatic story. In an effort to not spoil any of this narrative I am going to stop there but it's great and illustrates its point strongly and clearly. The narrative will roughly take you 3-4 hours on your first playthrough but will not take nearly as long on the second time around.

The sound suits the game perfectly, with a tune that matches the story that the game tells. I won't go into it too much but the soundtrack is kind of what you would expect from a game of this caliber. There are a few beautiful tunes I here that really makes me appreciate the story, world and puzzles when the music is playing in the background it is like it gives me an instant boost of happiness. 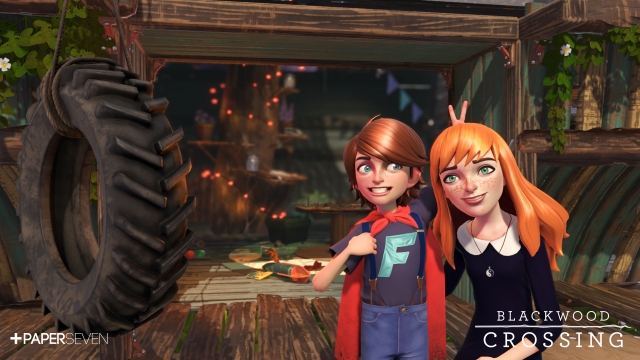 Though the game takes a cartoon artistic approach to its art style, it truly does look like a cinematic game with some beautiful character designs at points, although there are some highs with the artistic designs there are some lows as well. Including some beautiful views from the train car windows but I feel that they could have put some more emphasis on making characters look less cartoony and a little more real. I feel like I would have been more attached to the characters if they looked more realistic. Now for the low point of this review. There is no multiplayer as this game is heavily focused on its narrative, I feel this was a mistake as there was a huge opportunity to put some sort of fun Co-op mode such as hide and seek or some of the games that we played at the start of the story this would have made the game repayable and more enjoyable as this would be fun for siblings to play couch co-op with. There are also no further plans to introduce any additional content such as story DLC or free future content updates, although there are updates coming for bug fixes. There are however a whole bunch of things to do and see inside the game maybe things that you may have missed on the first play through.

While the story is a fun and an interactive cinema experience, there are a few issues with the game such as being a little short. But there is a genuine story here that makes up for all the issues, the story makes you think, feel and love. With the story being so great I wish that they would have had something to persuade players to replay the game, but there is no rewards to make the story worth playing through a few times. I hope that there is plans to introduce some kind of DLC that gives us further insight into the story of Scarlett and Finn. My first playthrough will always have a special place in my memories and this title is a highly successful one in my mind.