Well I must say, I’m surprised. I’m not usually a fan of the indie retro games that seem to be everywhere nowadays, although every once in a while, there will be a title that really stands out and grabs my attention. This time around it’s the fast-paced action platformer Bleed, developed by Bootdisk Revolution.

Right out of the gate, Bleed is easily one of most entertaining experiences I’ve had with a platformer. A hybrid twin-stick with an emphasis on spatial awareness, there’s a lot of love that’s going into this title. The well-crafted sprites, along with the detailed level design and dynamic boss fights make for a multi-structured gem in a genre that’s, quite simply, overflowing. Honestly, it’s just that good. 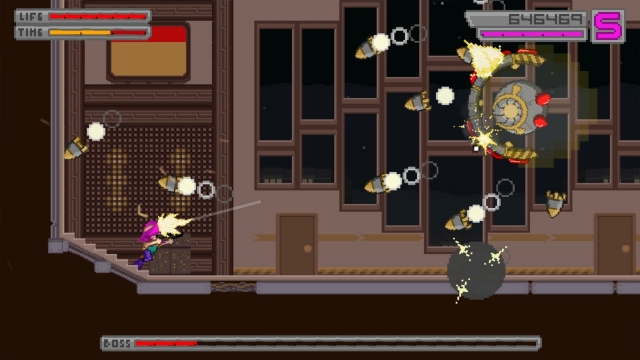 I think one of my favourite aspects of Bleed is how straight-forward the story presents itself. More often than not, there are certain indie titles out there that try to either pull a fast one with a last-minute plot twist, or they’ll throw too much narrative in, to the point where the overall tone or message becomes lost. Bleed doesn’t have that problem, it does exactly what it needs to do and with great effect. It provides interesting and colourful (literally in some cases) characters, unique settings for the player to move around in, and a story that’s not only to the point but also weirdly immersive.

Plot-wise, the player takes control of Wryn. Wryn’s main goal is to become the greatest hero of all time, an objective she takes to with rather nefarious means. How she achieves this is by killing every hero on her list until she has climbed the corporate hero killing ladder all the way to the top. Not to spoil anything critical about the plot, but this all actually comes together quite nicely at the end when Wryn eventually realises her goals. Although, it doesn’t happen in the way one would think. Corporate hero killing aside, there’s a lot to take away from the plot in terms of becoming something bigger than you initially were. Overall, though, the story is another enjoyable element that really shows with the time and effort put in. 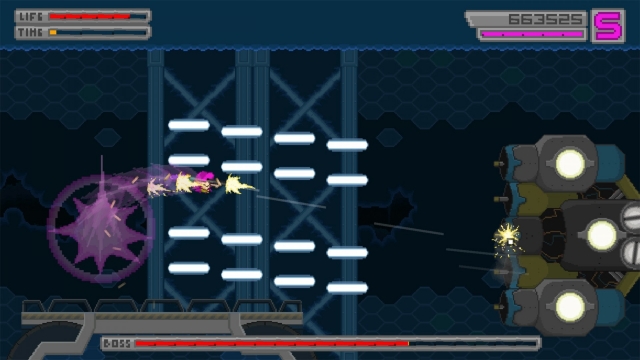 Speaking of enjoyable elements, the gameplay certainly falls into that category. In regards to how it’s structured, movement is the focus for much of the game. With a combination of both bullet time and dodge mechanics, players are tasked with timing out the best route in order to avoid enemy/boss attacks. Now while this does get quite challenging in the later stages, it’s a well-layered challenge that tests, as mentioned above, your awareness and quick-thinking. So yes, bosses can be challenging, but Bleed provides the player with an assortment of weapons that each have different levels of effectiveness. Truthfully, I only ever needed the starting pistols, and I managed to finish the game on normal with them alone, so take that for what you will.

The last thing I’ll mention about Bleed is the co-op mode, which does just enough right to not be considered token. I really enjoyed what the two-player aspect brought to the game, especially since local co-op has started becoming less and less of a ‘thing’ in recent years. The only big grievance I had was when gameplay started to get a little too chaotic in the late stages, that being said though, the game is chaotic in nature, so I won’t chalk it up as a major issue. Regardless, this might sound like too much of a plug, but you’ll be too invested to notice. 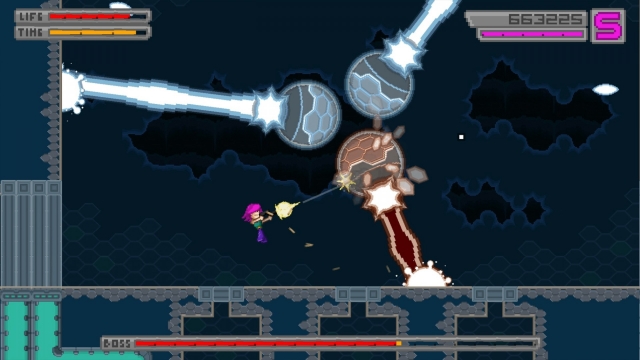 All in all, despite a couple of minor things like length (7 missions in total) and co-op, Bleed is worth the price of admission. Also, for any big fans of platformers or bullet hell shooters, definitely give this one a try. The combination of skill and style makes this a title that you won’t want to miss. Plus the co-op factor, although a bit lacking, adds that always important replay value. Long story short, play it, love it, and play it again.

Bleed (Reviewed on Xbox One)

Bleed's entertainment value is through the roof. Despite some nitpicks here and there, they're all overshadowed by the fast-paced, balls to the walls action that Bleed has to offer.