It’s hard not to like Lunar Lander on some level. The finesse required to counteract gravity and land safely on the moon’s surface remains supremely satisfying nearly four decades after its original release. But you can’t charge £7 for Lunar Lander in 2017. You need a gimmick, a hook, something to set yourself apart from the 1979 Atari classic. Blue-Collar Astronaut relies on wacky humour and some unique mission objectives to hold the player’s interest, but these do little to raise the game above mediocrity.

The concept of Blue-Collar Astronaut is that the player is drowning in student debt, so armed with a space driver’s license they must take on odd jobs to achieve the game’s ultimate goal: retirement. In addition to decently robust license test section there are two different types of odd jobs: pizza delivery, and space truckin’ (sic). Each job starts fairly grounded, or as grounded as space flight can be, but soon takes a turn for the ludicrous. The level where pizza-hungry aliens invade and must be fought off with a pizza themed Voltron, is a definite highlight, as is the mission where you must space truck a galactic cruise whose patrons can only be satisfied by driving into some kind of space balloon. Sadly, these more unique mission types are infrequent, and more often than not you just travel from one green objective marker to the next.

Not to say there’s no enjoyment to be had in moving from place to place. Played from a top down perspective, your ship can rotate left and right and thrust forward, but is otherwise at the whim of whatever gravitational pull there happens to be. It’s a tried and true control system that requires a good degree of finesse and clever manipulation of the physics system. This works well enough for landing on surfaces or maneuvering between asteroids; however, more demanding stages with lasers or missile launchers can become an effort in trial and error while praying that the randomised enemy placement works in your favour. It doesn’t help that the stages with enemies often take place in open space, where your ship is obscured by a larger, slightly opaque image of itself. Presumably this is so the player can still easily see their ship when the camera pulls out, but in practice it just makes it difficult to discern the hitbox. Not to worry, these lasers will pass through my big ship and entirely avoid my little ship… probably.

After completing a mission, the game rewards the player a dollar based score. Space dollars are subtracted for things like vehicle damage, fuel, an arbitrary food amount, and sometimes a joke; then the total is subtracted from the player’s debt. This debt is insurmountable, and that’s part of the joke. You can grind the same levels for hours and buy items that decrease fuel costs and such, but unless you’re a Lunar Lander savant or have an incredibly high tolerance for repeating the game’s hour long campaign, that debt isn’t going anywhere. It’s a joke that’s faintly funny at first, but after spending some time with the game it becomes hard to remember why this repetitive structure was ever comedic. 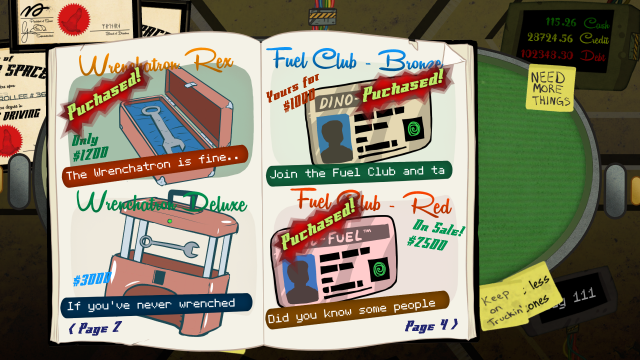 Every upgrade has a joke associated with it, but the comedy is diminished by the fact that you have to wait while the punch line slowly pans across the screen. Also, most of them aren’t all that funny to begin with.

There are a handful of additional modes to alleviate the repetition: time mode, fuel mode, health mode, and challenge mode. These unlock after completing a mission for the first time and add some incentive to replay missions. In time mode, the player must race against the clock while picking up extra time on the way to their objective, and in fuel mode the player must carefully ration their limited fuel supply through clever use of the game’s movement mechanics. These two modes test the player’s skill in fun ways. Health mode mainly adds some annoying homing missiles that destroys your ship in one hit, as well as the occasional bug where your ship explodes immediately after starting some stages. This bug seems to occur when you start the mission on the face of an asteroid, and is the result of an initial contact between the ground and the ship. It only affects half a dozen or so missions, but is disheartening nonetheless. Finally, challenge mode can be anything. Sometimes the stage will feature an extra mission objective or time constraint, and other times the mission will introduce enemies, or other obstacles. Challenge mode is inconsistent in objective and quality, and what changes is not always readily apparent.

Despite solid fundamental mechanics and satisfying controls, Blue-Collar Astronaut isn’t worth your time or money. While a few of the mission designs are inspired, most are either bland or frustrating, and the game’s attempts at comedy are smirk-worthy at best.

The insurmountable debt sounds like a mobile game gimmick to make you keep playing and watching ads...

Yeah. It's odd that there is no mobile version actually. Seems like it would work well enough on an Ipad.