It’s a crazy, fast-paced world that we live in, and everything is more complex than it was in days gone by. Back in the old days, when you could buy a loaf of bread for ha’penny thruppence and catch polio from a public swimming bath, everything was much slower and less complicated. Take gaming for example: my first computer had a joystick with one button on it. There weren’t 20 different buttons like on modern controllers. If you were lucky enough to have a joystick with multiple fire buttons, they all did the same thing, you just pressed whichever one felt the most comfortable to you. Bouncy Bob is a game that harks back to those long-lost days of simple controls, jumpers for goalposts, and dubious children’s TV presenters.

You can play this game with a single finger if you like, as you will literally only use the A button on your Switch controller. Our titular protagonist can’t walk or manoeuvre normally, instead he constantly wobbles left and right like a Weeble. You press the A button and a diagonal arrow comes out of his head, with Bob launching in the direction it is pointing when you release the button. You can tap the same button while he’s in mid air to get him to hover a little bit and there’s also the option to press it quickly to get him to bounce immediately on landing. That’s the full extent of control. Your task is to bounce the little fella onto the heads of the little green and black blobs that the game calls zombies.

When a game goes “back to basics” like this, it can be excellent. Games like Flappy Bird and Crossy Road adopted this self-limitation technique to create games which were totally focused on the gameplay, and they were all the more addictive for it. So did this method work for the developers at All Those Moments? No. It did not work at all. 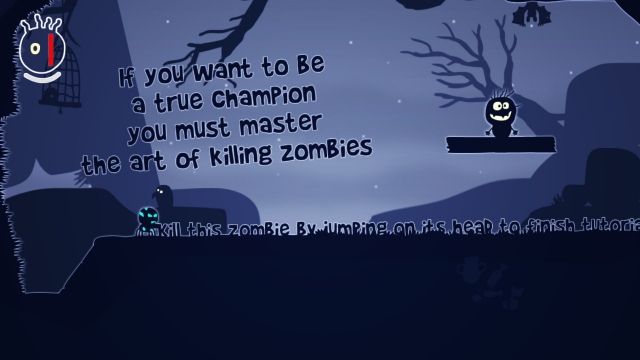 From the outset, this is a game that smacks of being a rushed job to get something out as quickly as possible. The graphics are a lazy silhouette style of incoherent shapes and darkness. If it was done right like in Limbo for example, then this could have been a lovely aesthetic. As it is, it just looks messy, and often there’s so much black on the screen that you can’t see what you’re doing.

Not that it matters anyway, because even if you can see what you’re doing, you never feel particularly in control of the game. Bob’s lack of proper locomotion is the unique selling point of the game, but it’s also its undoing. Firstly, there’s no way to adjust the height of the bounce, only the trajectory, so you can’t do short precise movements unless you want to jab at the button and sort of judder along the floor like a dog wiping its arse on the carpet. Add to this the fact that the character’s wobbling to-and-fro is much slower than the enemies’ movement, it’s an exercise in frustration as you’ve often lost half your health before you get him pointed in the right direction. Movement is simply a chore, and that sucks enjoyment from the game. 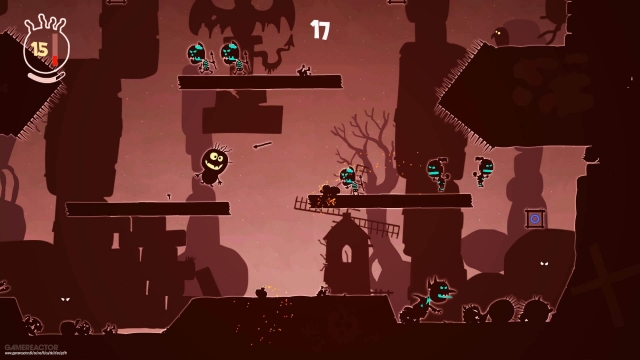 There’s also a multiplayer mode, for lots of couch co-op fun. And by “fun”, I mean “immense frustration at the ridiculous control system”. But hey, a problem shared is a problem halved right? Seriously, don’t play this with your friends if you want them to remain your friends. It’s no more fun in multiplayer than it is in single player, and with so many great multiplayer games on the Switch, there’s just no reason for me to recommend this one over the many far better games that you could be playing together.

I really wanted to like Bouncy Bob. Contrary to what some people might suggest in the comments, I really don’t enjoy ripping into indie games. I appreciate that a lot of hard work and effort went into the creation of this game, and the developers wanted to make something beautiful. The same could be said of the Titanic however, and we all know how that turned out.

I can’t think of a single redeeming feature about this game. It’s about as entertaining as a night out in Milton Keynes. Poor controls, lazy graphics, very little gameplay and everything is just a long, drawn out frustratio

The publisher's gave you a copy of a game that's usually around 10 cents for free lol.