The best way to describe Brawl is that it is like a mix between Twisted Metal and Bomberman. It's a party game with a dark side, one that sees a vast range of characters have their disturbing stories told in a nightmarish way. You will die a lot in this game and it will torment you for doing so. In its own charming way, Brawl will appeal to some, but how fun is it?

Brawl plays as top down party game where you have to strategically place bombs to kill opponents. For a game that will primarily be played with friends or online, it offers quite a good amount of single player content. You can choose from eight characters, with four being available from the start. The characters all have a tragic backstory told throughout their campaign and whilst the stories aren't amazing, they do offer incentive to play as everyone. What's better is that each character has their own special abilities and the story gradually includes these for the player to use. For example, the girl is able to throw a knife to slow down enemies. She can also teleport and switch places with the enemy trapping them if devised carefully enough. Other characters have their own quirks: the thief can go invisible, the wrestler can charge at enemies etc. These variations mean that character choice becomes key if you want to win, as you'll need a solid understanding of their mechanics to use them properly. The actual campaign is unfortunately underwhelming. The levels start off small and make use of your abilities one by one. The situations you find yourself in are never too difficult and they normally require you to sneak past enemies before you engage in any combat. Once the combat does start, difficulty rears its ugly head very quickly. To defeat enemies you have to blow them up using your bombs. Powerups such as a bigger explosion, more bombs and more health are a huge help and you will need these if you want any chance of winning. Enemies are smart and will consistently dodge your bombs and manage to trap you with ease. Careful planning is a must and mixing this and your abilities is your only chance of success. The difficulty can be off-putting and whilst the game offers tactical thinking, a bad checkpoint system in certain parts makes it frustrating instead of fun. The worst case of this happens at the end of every campaign where you must defeat 7 other characters one by one. If you die then it restarts the level and you have to try it again. It doesn't help that the core gameplay is quite slow. Bombs take a while to explode and many characters move at a slow pace. The game forces you to rely on tactics and planning ahead. This is all well and good but the slower pace makes levels feel overly long and the difficult A.I will test your patience.

You won't be playing Brawl for its single player content so it's lucky it offers a range of multiplayer modes as well. It offers local and online play as well as co-op so if you do happen to be taken in by the gameplay there's plenty of content here for you and your friends. There are the regular versus modes but the best ones might just be Sumo and Colour Domination. In Sumo you have to knock other players off of the map, making charging against enemies a deadly risk. In Colour Domination you're tasked with painting as much of the map as possible by using your bombs. The maps are well designed and show off a good variety of environments whilst some also have various traps placed around them. Unfortunately when trying to connect to a game online I couldn't find any other players. I tried numerous times but was met with no success. Hopefully this will change in the future as I'm certain players will find Brawl's online content to be the most appealing thing about the game.

Also included in the game are two challenge modes which can be played solo or cooperatively. One is a horde mode where you must defend items on the map from enemies. The other mode Sheep is easily the quirkiest but is also surprisingly fun. You must protect your flock of, yes you guessed it, sheep from enemies and herd enough of them to nab yourself points. It's a strange inclusion but it demonstrates delightful character. 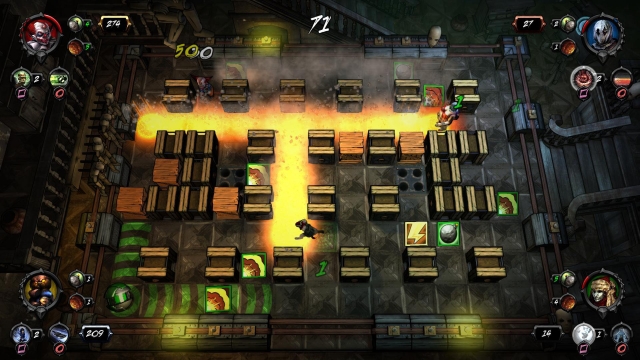 There are a lot of good ideas in Brawl in just never seems to take advantage of them. The dark and twisted characters could have added an edge to the game but instead feel out of place in the party genre. The forced inclusion of a story feels like a waste of time, failing to maximise on the admittedly well designed characters. It's not all doom and gloom though as the game is visually very appealing. It has a tremendous soundtrack that sounds as much like a nursery rhyme as it does like a horror film's score. The narration throughout the story is superb and features some genuinely funny dialogue and the cutscenes have a dark comic book appeal to them.

Brawl could have been a fun party game with a sinister tone but it falters at too many steps. The gameplay can be fun but the slow pace of it requires a lot of patience and forward thinking from the player. The campaign is disappointing and other party games do a much better job than Brawl making the online options commendable but sadly irrelevant. Unfortunately Brawl is one party game that isn't a blast to play.

Brawl could have been a fun party game with a sinister tone but it falters at too many steps. The gameplay can be fun but the slow pace of it requires a lot of patience and forward thinking from the player. The campaign is disappointing and other party games do a much better job than Brawl making the online options commendable but sadly irrelevant. Unfortunately Brawl is one party game that isn't a blast to play.