Science fascinates me, especially physics. But one thing that I’ve never been able to get my head round is engineering. Don’t get me wrong, I love creating things and I’m quite happy when given parts and instructions to build something, but anybody who’s ever seen me try to assemble a Billy Bookcase or a flat-packed rabbit hutch will attest to the fact that I’m not the sharpest tool in the shed with regard to engineering. For this reason, I enjoy games which let you play around with structures at no risk to life or expensive raw material. Like everyone else, I also love the Portal games, so this mash-up of the two seemed like a match made in heaven.

First things first, this is not Portal 3. We all know about Valve’s binary counting by now, so if you wanted another epic storyline with compelling characters and exceptional voice acting, then you’ll be sadly disappointed. What you do get is a lovely little puzzle game interluded with the acerbic wit and perfect deadpan delivery of Ellen McLain, who reprises her role as GlaDOS in this game. Nonetheless, it owes far more to Bridge Constructor than it does to Portal. 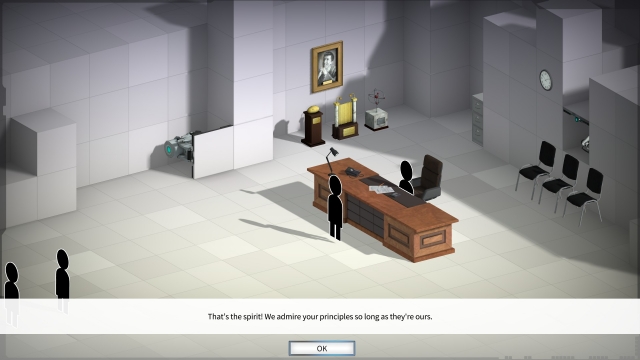 The trademark flippant humour of Portal is present in abundance.

The premise of Bridge Constructor Portal is pretty much what you’d expect from a game with that name. You construct bridges, and there are portals. It sounds simple, and I suppose you could argue that as a premise, it is. When the test chambers span across pits of deadly acid, with vehicles bouncing all over the place, laser beams and turrets trying to kill you and paths crossing, it’s certainly not a simple game to play.

Unlike Portal itself, the portal mechanic is this title is a static one. Rather than placing the portals yourself, you’ll be given portals with defined entry and exit points, and you have to use them to get your vehicles through the test chamber. This is a necessary shame. I’d have liked to be able to place my own, but given the smaller scale of the world that you’re inhabiting, that would likely lead to the game becoming too easy.

As it currently stands, ‘too easy’ is a criticism that you definitely can’t level at this puzzler. I found myself routinely taking half an hour to an hour on the later levels of the game, with ever more complicated bridges needing a good degree of experimentation and trigonometry in order to make them stable enough to work. There were a few criticisms levelled at the physics in the earlier Bridge Constructor games, and I feel that with the experience Headup now have, combined with the expertise of Valve working with them, they’ve really nailed it. It does mean that some of the solutions are head-scratchingly hard. For this reason I felt a bit overwhelmed at times, and when you spend an hour watching various permutations of bridge collapse in front of your eyes, that can take away the fun of the game a little. I was quite proud of some of my bridges, which I thought were quite elegant...

That said, Bridge Constructor Portal is presented in such a charming way, with care and effort put into matching the aesthetics of Valve’s series, that it’s difficult to stay mad for long. It’s like having a kitten. Sure, you’ll be annoyed when it smashes your favourite photo frame, but ten minutes later you’ll be back again to tickle it behind the ears and use it to get a JCB across a pool of toxic liquid.

The developers clearly know that this is going to be a game of trial and error for anyone without a Masters in Structural Engineering, and they allow you as many attempts as you need to get it right. You create your bridges, test them out, and start driving vehicles across them. If the inhabitants of said vehicle die in a horrible way, that’s OK: just go back into build mode and refine it. There’s never a need to start again, you can just tweak what you’ve already made. This means that you always feel like you’re making progress. Often I would find that tweaking structures still resulted in a fiery death for my paper-thin stick driver and his crew, but said decimation was a few feet closer to the exit, so I was happy.

After my time with this game, I’m probably still not up there with Isambard Kingdom Brunel and William Arrol, but I do feel like I actually learned a little bit, and I had a lot of fun in doing so. I might even go so far as to suggest that this would probably be a good game for older children to fool them into getting some education without realising. It’s tough as nails, and you’ll need to put some hours in if you want to complete it, but it’s addictive and totally worth it. 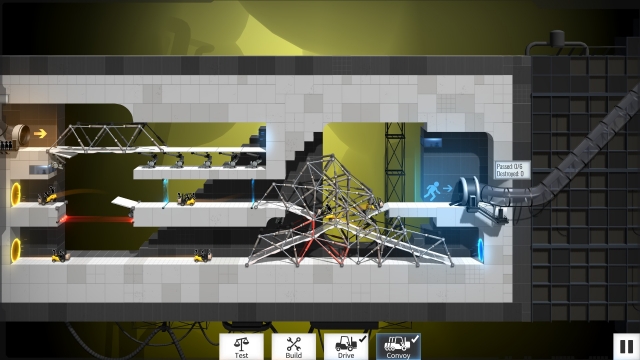 They say that love can build a bridge, but love isn’t GlaDOS’ style, so you’ll have to make do with girders and cables instead. Frustratingly difficult in parts, but a game that you’ll keep coming back to until you master it.