On first glance, Captain Toad: Treasure Tracker may not seem like the type of game that warrants much of your attention. In fact you would be forgiven for thinking it is another title in the Mario franchise. And whilst aesthetically it is very similar to Super Mario 3D World, Captain Toad :Treasure Tracker is a unique experience bettered by the title characters' not being Mario. The bite-size puzzler delivers a gleeful stroll through the Mushroom Kingdom throwing in some deceptively challenging levels along the way.

The game begins with Captain Toad and Toadette hunting down golden treasure. Before long Toadette is whisked away by a villainous bird and it's up to Captain Toad to save her. If all this sounds familiar then it is, but you shouldn’t worry. As Toadette gets star treatment as well and is even the braver of the two treasure trackers. Gameplay has you navigating miniature levels to get to the star at the end. This main goal can take as little as 60 seconds but to truly get the most out of the game you will want to find all of the gems that the levels have hidden within them. These hidden goodies can be difficult to find especially towards the end of the game. You'll often have to decipher numerous parts of a level to gain access to them, changing platforms along the way and avoiding deadly enemies. The gameplay is made more challenging by the fact that Toad and Toadette can't jump, the reason being the heavy backpack they are carrying. Our woefully underpowered heroes can't even run at too brisk of a pace, meaning simple enemies such as Goombas and Boos become fearsome enemies entirely capable of losing you a life. 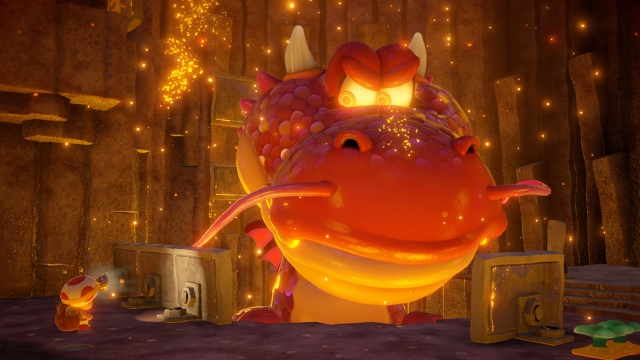 There are a few more types of levels besides the simple point A to point B levels. Within the game are also mine cart levels which act as an on rails shooter, speed levels where Captain Toad or Toadette are jostled through the level because of boost pads and boss levels. The boss levels against a fiery dragon are a major highlight in the game, ramping up the difficulty and throwing a lot of puzzling elements at you all at once. Certain items make a return as well, including 3D World's double cherry which duplicates the character.

The levels are enhanced by the GamePad which is useful for this type of game as it requires you to survey your surroundings, taking in visual clues to solve the various puzzles. With a quick button press you can zoom into the levels and get a better lay of the land. In doing so you not only gain insight into the puzzling environments but can also view the gorgeous aesthetic and charming animation that is frequent throughout the game. Captain Toad and Toadette are wonderfully appealing because of these animations. Seeing Toad huff and puff as he flees from a Shy Guy is constantly hilarious and the end credits show off Toadette's brave side in a mine cart montage through the Mushroom Kingdom. My biggest gripe with Captain Toad: Treasure Tracker is that it's over far too soon, ending just when the game is starting to give you grander and tougher levels. There is re-playability to be found in the previous levels and for a completionist there is certainly enough to do; bonus objectives appear after finished levels adding replay incentive. I would've liked a longer main game though as it only sits at around 6 hours. I can't complain too much given the retail price £29.99 but the opportunity to deliver a tough puzzle game is unfortunately missed.

Captain Toad: Treasure Tracker is a refreshing game and one that is charming and deceptively difficult at times. I enjoyed my brief romp through the Mushroom Kingdom and would like to see Captain Toad and Toadette in bigger and grander adventures in the future. For now though Captain Toad: Treasure Tracker should be recommended to puzzle and platformer fans alike as it delivers a solid experience with a boatload of personality to go with it.

Captain Toad: Treasure Tracker is a refreshing game and one that is charming and deceptively difficult at times. I enjoyed my brief romp through the Mushroom Kingdom and would like to see Captain Toad and Toadette in bigger and grander adventures in the future. For now though Captain Toad: Treasure Tracker should be recommended to puzzle and platformer fans alike as it delivers a solid experience with a boatload of personality to go with it. 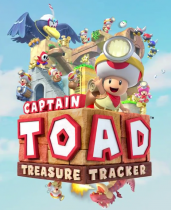