Can you ever shoot too many robots? This is the question Circuit Breakers answers with a resounding “no!”. Developed by Triverske, this title pits players against seemingly endless hordes of mechanized baddies to blast to bits. Whether the player chooses to take on the Arcade mode or the Score Attack mode, there are always more to shoot and that’s probably for the best since there’s not much else to do. Being a twin stick shooter set in seemingly randomized rooms, the only constant is that there will be robots, and you will shoot them.

Did I mention you shoot robots? Well sometimes, they shoot back or explode into a circle of bullets that you’ll have to avoid. This wouldn’t be much of an issue if the screen wasn’t already filled with bad guys and the energy crystals they drop. Later levels end up taking on a bullet-hell feel as more and more enemies fire at the player. These shots usually travel rather slowly, but can quickly overwhelm when enough of them are fired in a general area. Since the player is constantly trying to kite around the outside of the mass of enemies, these bullets create a wave shape that can be difficult to dodge if the player ends up in a corner. But like I said, this is all made far more obnoxious by the energy crystals that the robots like to spew out upon death. 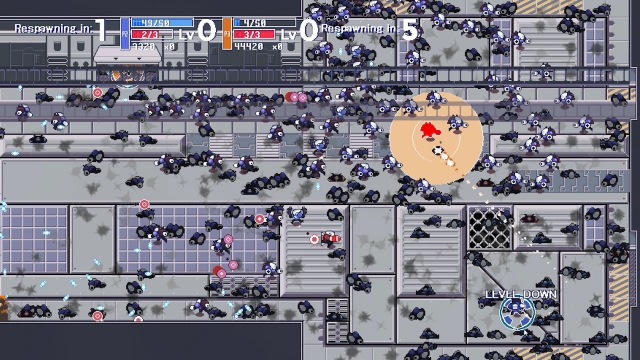 The energy crystals act as each characters ammo for the weapon while also being the resource that determines how upgraded the weapon is. For example, Aldo uses a machine gun; when he collects enough of these crystals, his weapon will become a Heavy Machine Gun. This is, of course, if you can collect enough to take his Repeater to the Machine Gun and then finally to the Heavy Machine Gun. This concept is neat, but becomes really obnoxious due to how often just firing your gun will cause it to lose a level. Since every shot uses some of your acquired crystals, it can take a lot of perfect playing to get back up to max level once you’ve made a mistake. The cost to fire is also different from character to character since they all have different weapons. Finally, there is also a shield that all characters can use to protect themselves, but it also costs energy crystals just to keep active. I really thought this idea was neat, but ultimately I found it constricting my enjoyment since I had to be so careful with how often I fired.

Having to be careful was what caused me to die more often than not due to the sheer number of enemies that would end up on screen. While there were a few variations and they had their own tricks and attacks, I often found myself just firing into the crowd while walking in a big circle because I couldn’t focus on any one robot. This is a failure in my eyes as it defeats the purpose of having unique enemies. I feel like a “less is more” mentality could have helped me to enjoy this title far more. That is, except for the co-op. The Xbox One release of Circuit Breakers allows up to six players to shoot robots at the same time. Co-op is truly the only way this game should be played by anyone that doesn’t absolutely love this type of game. Allowing any player to respawn after 10 seconds and giving them all the tools to be somewhat helpful despite their skill means that this could make an alright title to keep around for party moments when you just want to shoot robots. 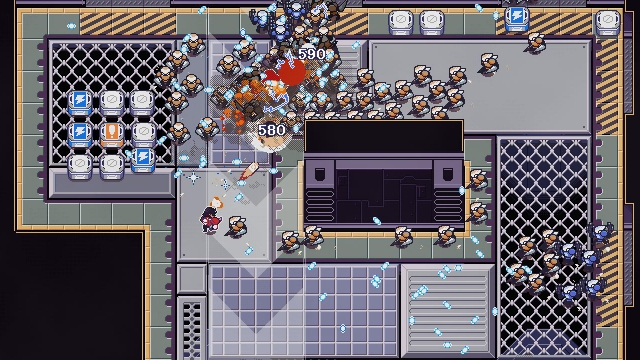 If you take anything away from this review, make it that this game is simply better with more people. With each new player, this game becomes more and more bearable. The largest issue I had was how repetitive the whole thing is. I mean, did I mention you shoot robots? I get that plenty of games could be boiled down in a similar way: did you know that you build stuff in Minecraft? But the difference is, you don’t do anything else in Circuit Breakers. This may be fine for some people, but I just can’t get behind it because I have a threshold for how many robots I enjoy shooting at one time. Even though the repetitive nature of the game was what irritated me the most, I’d have to say that the poor execution of the energy crystal idea is what truly ruined this game for me. The best way to describe it would be that the developers had this idea, and then only used half of it. If this system was more fleshed out or offered better rewards than better guns to shoot more robots, I may be praising it instead of bashing it.

Circuit Breakers (Reviewed on Xbox One)

This one's easy. Do you like shooting robots? Could you play a game where you continuously shoot robots with no other clear goal? If the answer is yes, then this may be for you. If you require something deeper then you may want to pass on this one.

I'm 40 so when Ciruit Breakers is mentioned as a game I instantly think of the PS One Top down racer.

I can't say I know that one. I usually played Tekken, Tomba, Twisted Metal, and Final Fantasy VII on my PS One. :D