While it can be seen as somewhat gauche to compare one game to another, I feel like gaming is a medium that invites imitation and, more than that, celebrates it. The first entry from indie developers Nuclear Strawberry, brought to us by relatively prolific publisher Degica (RPG Maker, One Shot, Mushihimesama, etc.), Copy Kitty is one such game that begs for comparison, and not only because copying is the name of the game. This makes its closest two analogues Mega Man and Kirby, themselves games about copying the powers of your fallen foes. But while Copy Kitty does a fair job at capturing their feel of turning an enemy’s power against it, it also does plenty of things to carve its own identity. In Copy Kitty you play as Boki, a wannabe hero and an “entama” - that is, an individual who can copy the powers of others. More than copy, however, Boki is capable of absorbing up to three powers at once and unleashing powerful attacks based on those three powers.

This is the crux of the game and, as you can undoubtedly guess, it makes for a very entertaining gimmick. The game features a good selection of powers that add up to a grand total of 175 possible combinations. Not all of them can be combined (there are several “solo” weapons that, unfortunately, work only on their own), and not all of them are exceedingly useful, but all of the 175 power combinations feel like well-crafted combinations of the three attacks in question, and it is easily worth the modest price of entry just to see these over-the-top moves in action.

Obviously this forms the crux of the experience, and is the biggest draw of Copy Kitty. The combination powers are great, but you also find Boki using her powers in clever ways throughout the game, and some of these make for the game's most entertaining moments, like when the clever little kitty leaps into a giant, animated castle boss and takes control of it to fight, kaiju style, against another giant boss, or when she copies a boss' bombastic special attack to give them a taste of their own medicine and send them rocketing off into the stratosphere. 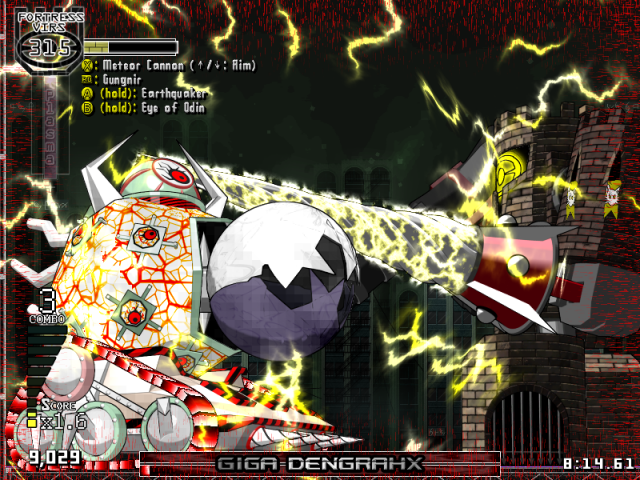 These moments are simple, and rarely have much effect on gameplay, being used solely as bombastic set pieces, but they're both entertaining and gratifying, particularly when bashing your head against the same section for a stretch.

I tended to use the simplest weapons available and blast my way through almost every stage, and I feel like I was rarely punished for this. However, I can see where mixing and matching to find the perfect combination to finesse through the levels faster and take less damage would be equally rewarding...and probably mandatory on the game’s harder difficulties.

To ensure that you can’t just solely focus on the powers you like best, each stage has been carefully crafted to only allow (and need) several different types of weapons at a time. This gives Copy Kitty as much of a puzzle game feel as a platformer as you try to find the best (and sometimes only) way to progress through each level. Unfortunately, at times it can feel like the game isn’t built with this sort of gameplay in mind, and it can sometimes begin to feel a bit too chaotic to try and be clever as you try to navigate an obscene amount of seizure-inducing sparkly attacks, hence why I tried to keep to the simpler powers whenever possible. 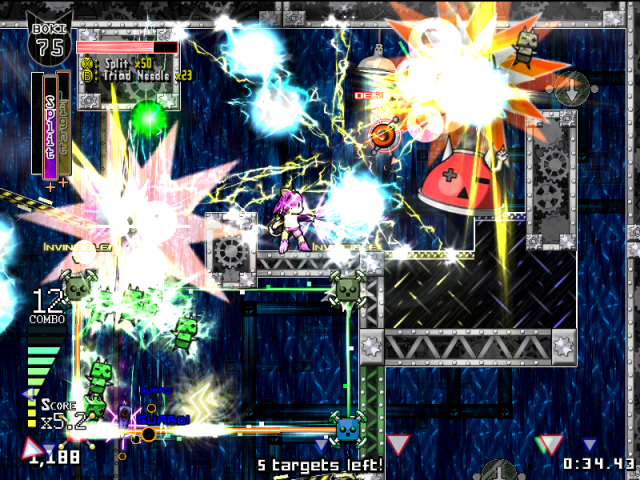 That being said, with the exception of a few bosses (those who have played the game can probably guess which ones), I didn’t die very much on my first, casual run through. The game feels difficult, and in many places it is, but with just a little bit of quick thinking and reflexes, an average player should be fine...just like it should be.

Of course, all of this likely goes out the window with hard mode, which, at the time of writing, I have not tried. Between that and the game’s scoring system, Copy Kitty is bound to keep fans occupied for some time.

The graphics, while not remarkable, are pretty much exactly what they need to be and don’t distract from the action - which is a small miracle in and of itself in a game like this with so many things going on at once. It can be woefully easy to get completely blindsided by a million attacks at once but in general, it’s pretty easy to tell what’s going on. The character models, particularly the enemies, are simple yet charming, and easy enough to tell at a glance, which is important in a game like this with so much going on. 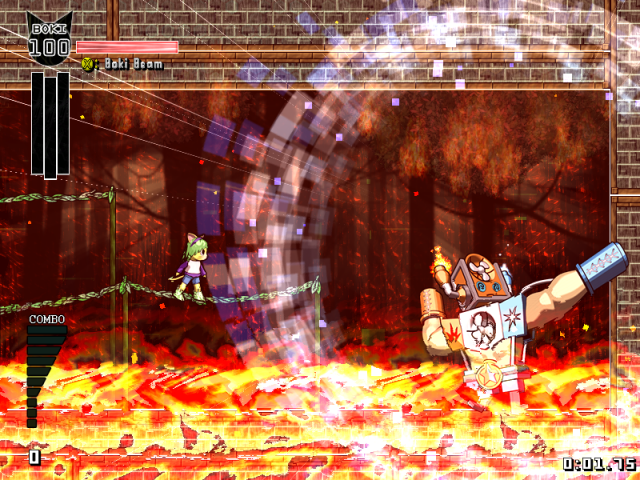 The games controls, arguable the most important aspect of a game like Copy Kitty, are functional. Most of the time I had no complaints, but there was the occasional experience of being unable to aim precisely enough to hit priority targets. These grievances, while annoying, were few and far between enough that I scarcely remembered them for the overall experience.

The game’s two weakest links are, perhaps, its story and its sound design, particularly its music. In the case of the latter it’s just forgettable. It goes for a retro feel but just ends up sounding a bit repetitive. I ended up turning it off completely in favor of some more fitting music on Pandora or Spotify (which is fortunately a thing we can do now).

In terms of the story, it, like the graphics, is serviceable for getting the player right into the action, but it does little to engage or immerse the player in the world or the characters. In short: Boki receives a gift from her uncle on her birthday, a virtual military training program. If this seems like it’s a bit of an odd gift...it is. But as an entama and a would-be hero, Boki needs some practice honing her powers. 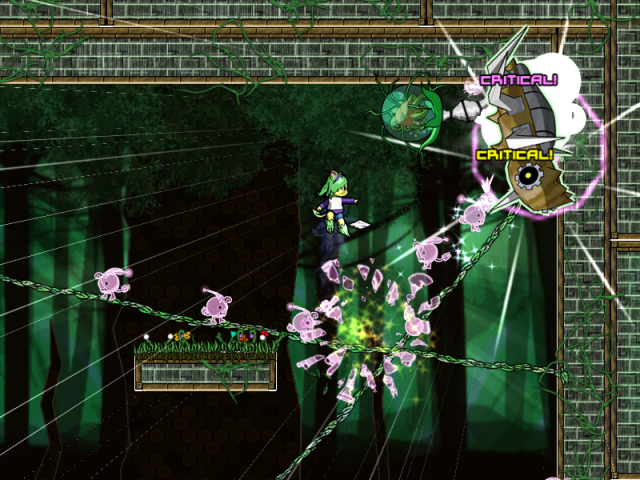 This practice comes in the form of numerous stages over the course of 12 worlds. The story, which follows Boki learning about her powers in order to challenge the “cybers,” who seem to want to destroy the world for whatever reason, is pretty forgettable. The angle of a “training simulation” is an excellent vessel to deliver the promised experience, but it's not particularly good for much else. Still, as long as you don't go in expecting too much in the story department, you won't be disappointed. It's not bad. Just forgettable.

All in all, Copy Kitty is an enjoyable, budget experience that would easily be able to stand on its own merits against its more venerable kin with a bit more polish. The story is a bit of a miss but not enough to drag the overall experience down. The interesting core mechanics and game’s unique aesthetics make Copy Kitty an exciting ride, and the brilliant addition of a second, completely different character to play, an endless mode, and a map creator elevate the game from just good to pretty darn great.

With a bit more polish, Copy Kitty would stand the test of time like the games it sets out to emulate. But despite its flaws, it's a strong title that uses its desire to emulate overall better experiences to create something unique, interesting, and most of all, enjoyable. If you're willing to overlook its flaws, Copy Kitty is well worth a look.