The premise of Crimson Earth is simple: the world has been overrun with zombies and it’s up to you – a lone marine – to single-handedly dispose of them by burning, tearing, exploding or smashing your way through 13 chaotic stages. From indie developer EHTechnology comes a new third-person action shooter that promises to deliver a thrilling ride of undead bedlam to the beat of a hard metal soundtrack.

My first impression of this game was… not great. I jumped into the first mission, which is set on a dry dock as the undead hordes approach from the devastated city ahead. Armed with just a pistol and rifle, I began filling the shambling corpses full of holes. Immediately from the outset, the flaws of Crimson Earth became apparent. I scouted out a few areas to look for supplies, but I realised the zombies pop-in at a close proximity, meaning there was no real way to determine which locations are safe. In the end, I decided to make my stand in an alleyway filled with bins and other large obstacles, not that it mattered as the enemies were able to clip through most objects. It’s here that I also learned how incredibly easy it is for the player character to get stuck in narrow areas. During this first round, I even fell out of the map and was free to wander the out-of-bounds zones. 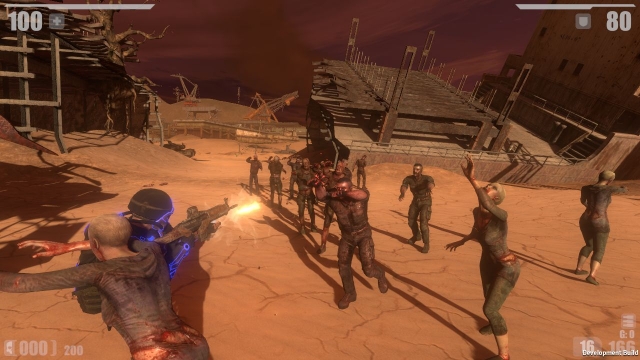 I restarted, this time sticking to the starting area in order to try and minimalise the amount of game-breaking bugs I would experience. Once again, the zombies popped in as if from nowhere. The next thing I noticed was how awkward the AI is. Zombies will sprint at you à la 28 Days Later, but upon reaching the player’s vicinity will retract into a Romero-style shuffle. All tension is diminished once this occurs, because you can rest easy knowing you’ll have plenty of time to line up your shots without the fear of being attacked.

Nevertheless, I cleared the first mission and proceeded to the next, this time set on a decrepit shipping vessel that had washed ashore. After quickly killing the zombies on board the ship, I tried jumping down onto the beach and experienced yet another odd bug. There’s no jump function in Crimson Earth, but this also means the developer didn’t add in a practical way to descend from a ledge. Instead, your character will briefly walk off the edge, hover in mid-air and remain there until you switch weapon, at which point you’ll immediately drop down onto the floor below. Without fall damage, I should add. 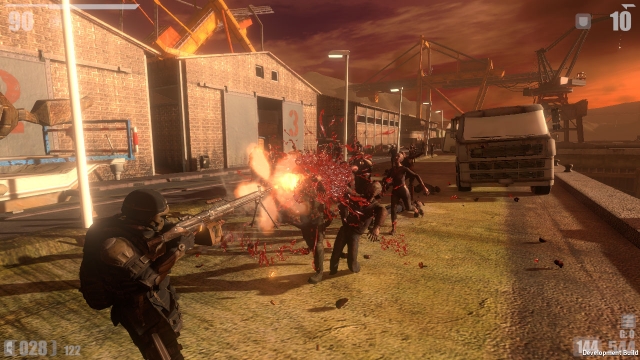 After completing a few more missions, I needed a break from the headache of these glitches and decided to check out the options menu before logging off – or rather the lack of options. Upon launching the game you are presented with drop-down menus for resolution and graphics qualities, but nothing else. To try and trim down on some issues I’d been having, such as RAM crashes and intensely high frame rates, I fiddled around in my graphics control panel to adjust a few things. It did nothing to help; forcing vertical sync through my graphics card didn’t improve performance. While in-game, my frame rate would still run at around 600 while it was up to 1000 in the menu. For a person who is very paranoid about excessively high frame rates causing overheating and damage to GPUs, I made sure to tread carefully with this.

Jumping back in later for another play session, I instead decided to check out the perks and weapon reward systems the Steam store page boasts highly of. When you kill zombies, you earn credits used as currency to buy more powerful guns. The list of upgrades include a shotgun, flamethrower, a sniper rifle and several additional automatic weapons. Despite not being a long game, with it having only about 15 total missions, it’s possible to acquire every gun by the finale. Each weapon feels unique enough to allow different playstyles. The problem being the most fun guns to use – arguably the sniper and the shotgun – are also the most unstable in the game. I had no problem finishing missions using the assault rifle, the pistol or the flamethrower, but using the other weapons would result in an onslaught of crashes.

One of the more interesting aspects of the game’s design is the perks system, allowing you access to abilities such as air strikes, incendiary ammunition and even calling upon God himself to land a meteorite at a location you specify. While these abilities are fun to use, they call upon a bigger problem I have with this game; there is no real theme. If a game like Killing Floor or DOOM had these power-ups, I would not question it. Those are the types of games where over-the-top action and absurdist sequences are accepted and welcome. Crimson Earth’s aesthetic is too plain, its soundtrack too generic and design so lacking that it has no real hook to bring you into the world. Which is a shame, because the game actually looks very pretty on the highest graphics setting, at least a lot more than your standard Unity asset flip. 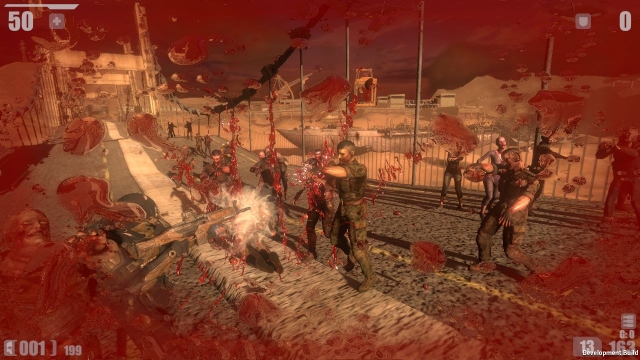 Believe it or not, Crimson Earth actually has a decent gore dismemberment system. It uses a layering system similar to Techland’s Dead Island, where shooting certain parts of the body will remove sections of flesh and muscle. Likewise, pumping enough ammo into the chest will create noticeable holes, whereas shooting its wrists will result in its hands dangling off as it continues to shamble towards you. Of all the lacklustre features in this game, this came as the most surprising and I believe deserves some genuine praise.

On a whole, Crimson Earth is lacking in almost every department. It could easily be a three hour game but is instead stretched into 7-10 due to the amount of sidestepping you’ll need to do to get around the crashes and bugs. As much as I’d like to believe EHTechnology will address these bugs and add new features to the game, there has been a stark absence of any communication on the Steam forums, so that’s beginning to look very unlikely.

The PC market is already over-saturated with zombie shooters, and Crimson Earth doesn’t bring anything new to the table. With enough bugs, odd design choices and crashes to fill a book, you’d be better off sticking to richer shooters such as Killing Floor or Nation Red. Even for the £2.79 price tag, this is really hard to recommend.