Cult of the Lamb Review

Cult of the Lamb is the latest indie title that has swept across the Steam wishlist main page; it has been garnering hype since its announcement. However, this is the first time I'm not scared that a game has doomed itself through that tidal wave of (sometimes misplaced) love.

It's hard to explain what Cult of the Lamb is about because there is so much to do that trying to describe it feels wrong, but the gist of it is that you're a little lamb who becomes the vessel for "The One Who Waits", which is essentially the devil. He's been chained up by four heretics of the Old Religion, and in a desperate attempt to stop him from freeing himself, they've begun murdering people by the masses, including you. In a funny twist of fate, it was your death that allowed for the two of you to come into contact. What he asks of you then is simple: build up a cult, gain a lot of followers, and use their power and worship to destroy the four heretics.

Although the premise sounds simple, the game is far from it. In Cult of the Lamb, your followers aren't mere numbers and hooded bodies, they actually have personalities and interact with you. Despite not having full conversations or even actions, what they do spoke deeper to me than most games with actual interaction. Within the first few exchanges with them, I was absolutely smitten because I instantly felt the sense of community in hammering away with them to collect resources or build structures. Most games always either make the followers do everything or make you the follower, and I think that is one of the most beautiful aspects of Cult of the Lamb — you're in a tightly knit community. Unlike other games — looking at you, Animal Crossing: New Horizons — the interaction with the cultists is a constant. I spent countless hours — both in-game and out — building structures with and for them, and they gave me quests that were oftentimes silly or ludicrous. Everything I did worked towards a greater goal with them, establishing a perfect sense of community. One of the great things that the developer did was give you the opportunity to rule your cult however you want to by giving you control of what type of leader you are; whether it's through the different buildings you make or the Doctrines choose, you control how tyrannical the little lamb is. The biggest way of doing so is by collecting fragments of Commandment Stones that give you the ability to set a new Doctrine that either grants you and your cult a passive or a new ritual you can do to gain a bonus. Every Doctrine falls into one of five categories (FOOD, DEATH, LOYALTY, BUILD, MATERIALS), each with a set of four bonuses that are centred around them. Going for categories like DEATH ensures that your followers know how to feel about the afterlife, which allows you to choose between having them worship sacrifices or prefer funerals. This system allows for a more customisable approach to how you want to rule, as it negates the black and white choices, and doesn’t set you in stone as a tyrannical or benevolent leader. This system allowed me to choose to be a chaotic good lamb, allowing me to sacrifice all of the dissenters but continue to reward those that remain loyal to me.

I think overall, that is the most charming aspect of Cult of the Lamb: the developer wants you to have the freedom to be whoever you want to be in-game. Do you want to fish for hours to feed your followers delicacies, or do you just want to advance the story? Do you want to spend your crusades gathering resources to build up your camp, or killing enemies to grow stronger? Do you want to collect decorations to make your base pretty, or do you want to focus on gathering resources? It doesn't matter because everything is important, and everything is valid — something many games fail to do. That flexibility allows us as the players to easily slip into whatever floats our boats and keeps us entertained, essentially making this the ultimate tailored roguelike, as not only is everything randomised, but no one will play the same way.

In fact, I spent most of my time decorating, as I love the graphics. The animations fluctuate from adorable to horror-like in a perfect balance, everything seems like it's made out of paper and coming out of a storybook, and the music was excellent, by far one of my favourite original soundtracks I've heard. Just like the graphics and gameplay, it mixes cute, creepy, serene, and chaotic in a way I had never seen before. But again, decoration is not the sole purpose of the game, so don't worry if you're not into that type of stuff. 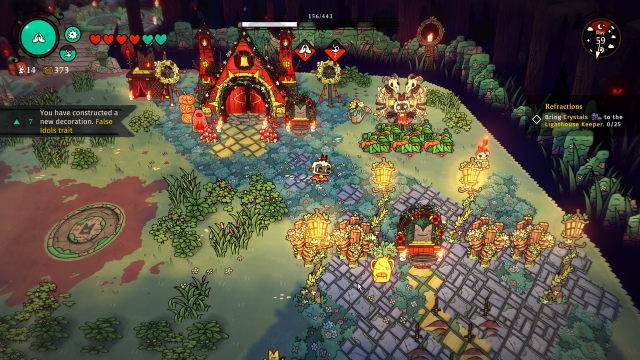 In addition to the Rituals and Doctrines, you also have buildings that can help you and your cult out. Some of them are centred around giving you more worship, such as the praying altars or Offering Statue, and others are more focused on your followers, like giving them proper graves, a bathroom, or even just a home. And, like I said before, the cultists aren't there just to be numbers, as you can watch them build friendships and relationships, use them as buffs during crusades, send them out to collect resources, and even marry them. And although none of these mechanics are extremely in-depth, they all feel fleshed out enough to give the NPCs heart and character. For example, one of the missions I got from one of the followers was to go into the Darkwoods and get them some flowers because they wanted to advance romantically on another cultist (although they “mysteriously” disappeared that night and I married their crush the day after), and another one wanted me to find their missing friend and see if I could save them from the genocides happening. They just feel right and real, and I quickly grew to love the followers because of it.

But enough about the NPCs and heart of the game because that is definitely not all there is to it. Cult of the Lamb's combat and exploration blend many incredible gameplay styles marvellously, resulting in a very fun, randomised, and fast-paced dungeon experience. Much like in deckbuilding roguelikes, you'll be given a path to choose from, and each option leads to an event. Depending on what you choose, you will go into a singular room and encounter what you chose (such as a vendor, resources, or followers), or a mini-dungeon where it will work much like The Binding of Isaac, as you run around exploring different rooms until you find the exit. Death is not the end either, as your boss will revive you back at your base with some of what you collected, and you go right back into the game like nothing ever happened. Additionally, throughout the dungeons and missions, you'll be unlocking many powers-ups you can find during your runs that will help you with killing the bosses, such as curses, buffs, and weapons.

And lastly, one of the aspects of the game that had made me wary was the idea of having to rely on a following. The cultists are pretty easy to satisfy, especially if you go for the right Traits, Rituals, and Doctrines (which isn't hard to do). In fact, I quite loved the idea of being a cult leader, as having a bunch of NPCs worship you blindly was weirdly nice, and the amount of progression you can have if you min-max is pretty crazy. 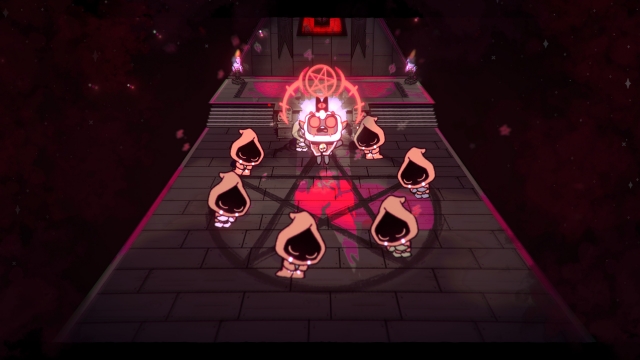 All in all, Cult of the Lamb has to be one of my favourite videogames released this year (if not just ever). From all the heart the developer put into the customisation, to the adorable NPCs, to the awesome and fluid combat — this game has it all and so much more.

Cult of the Lamb (Reviewed on Windows)

There's something for everyone in Cult of the Lamb, and every mechanic and feature feels well thought out. The game is cute, funny, and fun. Everyone should try it!

7 Things You Can Do in Cult of the Lamb

Cult of the Lamb Launch Trailer

Cult of the Lamb Review

Cult of the Lamb