Can you ever truly know someone? Is trust simply an illusion? Could you ever be driven to kill? These are the kinds of questions developer Spike Chunsoft pose in their maniacal-yet-whimsical interactive mystery novel, Danganronpa: Trigger Happy Havoc; an eccentric tale of intrigue and betrayal that will keep you guessing until the bitter end.

The title’s sinister premise involves fifteen high school students being invited to attend the prestigious institute of Hope’s Peak Academy. Each classmate possesses a unique skillset and are considered unparalleled in their respective fields. Attendees range from the conventional – a writing prodigy, a programmer and a swimming pro – to the bizarre; a clairvoyant, a pop sensation and even a biker gang leader.

Upon arriving the pupils find themselves trapped and are confronted by the sadistic-yet-adorable teddy bear, Monokuma. Claiming to be the headmaster, he explains they must live out the rest of their days confined within the building, unless they do the unthinkable. If one of them can murder another without being caught they get to ”graduate”, earning their freedom. However, if the culprit’s identity is uncovered they will be executed for their crimes. 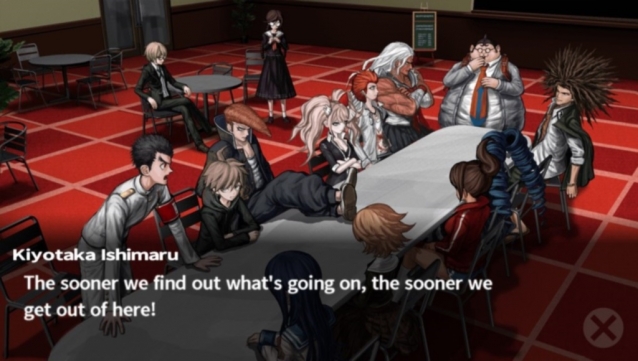 The diverse cast of quirky characters are charismatic and largely likeable. Absurd personalities juxtaposed against the seriousness of their plight create a wonderfully schizophrenic atmosphere, that can amuse and horrify in equal measure. The colloquial dialogue is engaging and well-written, and – though much of the story is experienced via simple text set against handsome manga illustrations – the energetic voice acting is both endearing and entertaining.

You take control of an unexceptional teen accepted into Hope’s Peak via lottery, ironically known as the “ultimate lucky student”. In first person, your scholarly environment can be explored and your fellow captives approached. Building relationships and ascertaining the motives of your companions is central to the experience, and by befriending them and plying them with gifts a clearer image will begin to form.

The game’s six chapters – each of which last three or more hours – typically unfold by allowing you to free roam before presenting you with a grisly homicide to solve. It’s heartbreaking to hear that a friend you were chatting with only moments before has been assassinated, and even worse to know that one of you is the assassin. 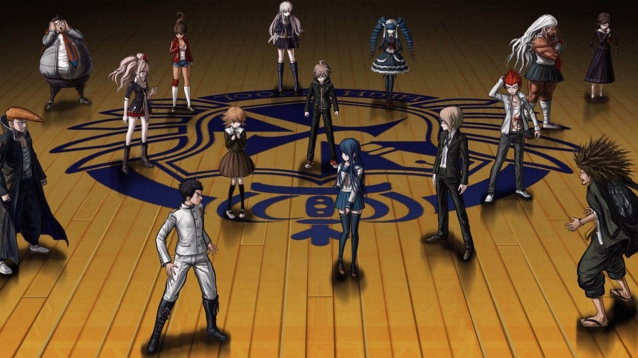 Once a body has been discovered you are required to examine the scene, taking statements and employing a meticulous ‘point and click’ approach to seek out pertinent evidence. When the investigation has concluded, the survivors take part in a gruelling class trial to expose the guilty party and see that justice is done.

These lengthy courtroom scenarios are unquestionably the highlight of Danganronpa. Intense and convoluted but always rewarding, proceedings involve listening to various testimonies and presenting your findings. Slowly the sequence of events is pieced together until there can be no doubt as to who perpetrated the deed. Like the murders themselves, the ironic executions are violent and gory, never failing to shock and appal.

Bursting with personality, the manga-like visuals are definitely another positive aspect, providing the bulk of the comic relief and a great deal of heart. A combination of 2D and 3D with charming 8-bit embellishments, the game is a feast for the eyes from start to finish. Masafumi Takada’s soundtrack is also a worthy addition; a mix of pulsing electro and lively character themes (complemented by chilling sound design), that while somewhat repetitious is insanely catchy and a lot of fun.

Danganrompa provides an interactive murder mystery that is dark, comic and unusual. Accompanied by gorgeous manga visuals and winning voice acting, its simple gameplay and deep character development serve a narrative that is as perplexing as it is compelling. Unfortunately, the game’s rigid linearity precludes branching paths in the storytelling, but like any truly gripping novel, you will still be utterly captivated by the journey.

Danganrompa provides an interactive murder mystery that is dark, comic and unusual. Accompanied by gorgeous manga visuals and winning voice acting, its simple gameplay and deep character development serve a narrative that is as perplexing as it is compelling.