My first night in Darkwood was spent backed into a corner – nail-board in hand – eyes peeled on every possible entrance into the room. Waiting, ever so patiently, for any sign of movement that would trigger my survival instincts. I heard creaks, knocking, and ghastly voices – every cliché you could think to exist in a work of horror. At one point, the lights flickered rapidly for a few moments, but dawn came quicker than I had expected.

In Darkwood, you are a man lost in the woods. Played from a top-down perspective, you must scavenge and survive in a constantly hostile environment that is randomly generated in nearly every aspect – from the layout of the forest to the items you’ll obtain. By day, you should be exploring the woods, gathering supplies and discovering new secrets. By night, you’ll take cover in your hideout, set up traps and prepare to defend yourself. 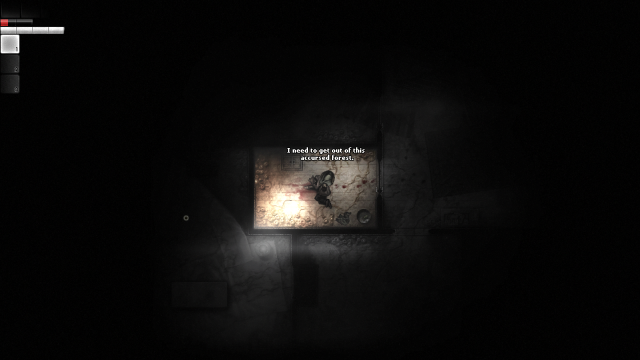 Throughout your first few hours in the woods, one thing becomes painstakingly obvious: this is not an easy game. It will not hold your hand or provide quest markers to help you. The tutorial is minimal and encourages you to discover how the game works for yourself. This giant curve of difficulty can be frustrating to some, but you can get the hang of it very quickly after a few in-game days. On my first playthrough, I had no idea what to do. I was given a map and a few essential supplies, the rest was on me to explore and discover what was in store for me. The whole MacGuffin of the first chapter is to recover an item that had been stolen from you, and there are very few hints at first on where to go. Instead, Darkwood wants you to experiment and improvise your way around the game world.

I didn’t think I would come to learn how challenging this game could be until around my third day. The longer you stay, the hungrier the woods grow; and so after a few nights of hearing those same noises from before, I decided to begin fortifying my defences. I barricaded the windows, pushed a dresser in front of the door, and crafted a few bear traps to set up around me. If a monster wanted to get me, they’d have a hard time doing that. This was when I heard banging at the front door. A group of savages had found me, and were breaking in. My nail-board was ready, as was I. The door fell with a loud thump, and I could subsequently hear the footsteps of the monsters traversing the house. One managed to make it into my room, pushing the dresser aside with ease. I charged at it and swung my weapon, piercing the savage’s face and knocking him down. As I finished him off, I could hear the rest of his party coming for me. That was when morning came and saved me.

You’re always safe in the morning. Time freezes and you’re visited by a trader, allowing you to rebuild your defences and prepare for the day ahead without losing any time. If it’s your first night, you’re visited by a ghastly man with the head of a wolf. The Wolf Man acts as the first major character you’ll meet and he proves to be a useful ally, providing weapons and supplies for when you need them the most. He has several camps dotted around the forest and will eventually offer you quests to complete. You’ll also run into a further diverse cast of characters, each of them suffering from the effects of the woods. There’s a creepy musician who desires for you to fetch him a key, as well as a family that wear gas masks that have lost a small child. While it’s entirely possible to complete the game without doing these quests, they offer rewards that will help you immensely in the endgame, and as you venture deeper into the woods, you’ll find all sorts of surprises waiting for you.

But Darkwood does not discourage you from ignoring the story either. It’s entirely fair to play it as a straightforward survival sandbox game much like you would with Minecraft or Project Zomboid, with each night becoming increasingly difficult as you struggle to manage supplies and keep your weapons in top shape. There is a completely fair balance between following the story and creating your own narrative by simply trying to survive.

As you progress further into the woods, you’ll have a harder time surviving. Useful items such as wooden planks and petrol become rarer, whilst tougher enemies will attack you at night. By the time you reach the third area of Chapter 1, it’ll become more of a gamble on whether you want to get more petrol to keep your generator running or to risk searching for materials to keep your weapons fully maintained.

All of this is backed up by the crafting system; which is admittedly not as impressive as it should be. You gather items from around the world and combine them to create a unique weapon or consumable item. Players with any experience in modern crafting mechanics such as those present in Fallout 4 or ARK: Survival Evolved should know what to expect here. The problem is that this system adds an unnecessary layer of difficulty to the game, because on top of the already large learning curve, there is also the possibility that you may spend several in-game days exploring just to craft a simple weapon. While most of the gameplay mechanics present in Darkwood feel realistic and fun to suffer through, the crafting system could have used a bit more work. 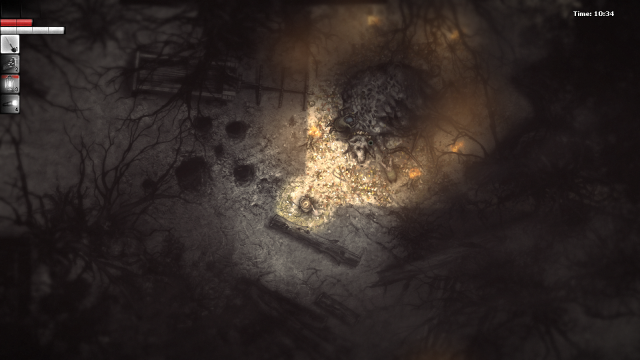 Aside from that there’s also a simple traits levelling system in the game. As you explore the forest, you can collect strange organic material such as monster meat and poisonous foliage which can be used to increase your abilities, such as passive traits like gaining more health or higher stamina, or active ones like being able to avoid setting off traps and remaining invisible to monsters. You will also be forced to take a negative trait in exchange for these buffs, which will ultimately allow you to create a truly unique character with both strengths and weaknesses.

On a technical level, Darkwood is one of my favourite atmospheric horror games. It features Lovecraftian-inspired graphics and a darkly tense score by Artur Kordas. When this is coupled with a claustrophobic cone-of-vision and challenging nature of the game, it becomes clear that this is a horror experience that does not need any jump scares. You will not be terrified by monsters jumping out at you from the darkness, but rather the possibility of that happening. Much like the best films that use atmosphere as a device of horror – such as those developed by David Lynch and John Carpenter – all the terror in Darkwood comes from its ambience; the sounds, the music, and the suspense of how bleak the woods are presented.

Despite some unsatisfying gameplay systems, Darkwood can provide legitimate thrills and scares for the horror fans that miss the vibes of such classics as Silent Hill 2 and Pathologic without ever using a jump scare. Whether it is the uniquely grotesque art style or the ever-challenging design of its difficulty, Acid Wizard Studio has proven it understands what ingredients make up a good horror experience and the randomised elements of the game allow a unique narrative every time you play.