The mix of first-person shooter mechanics and platforming-based gameplay is not an entirely new one with game series like Portal and Mirror's Edge towing the line between the two. DeadCore treads a similar line mixing the two genres but instead leaning on a more ‘twitch’ focused style of play.

Level design is centered around tight and narrow vertical platforming, forcing players to be measured but agile in their movement. The addition of a firearm that opens doors, activates jump pads and disables turrets increases the difficulty of the game by forcing players to react to the environment as they traverse it. It’s a simple concept that draws gamers in with its replayability.

In terms of content the game is relatively short with only a handful of levels. As I’ve previously mentioned, the developer of DeadCore have hedged their bets on players wanting to replay the levels present in the game. There is a speedrun mode available as well, which pits your time against others playing the mode. 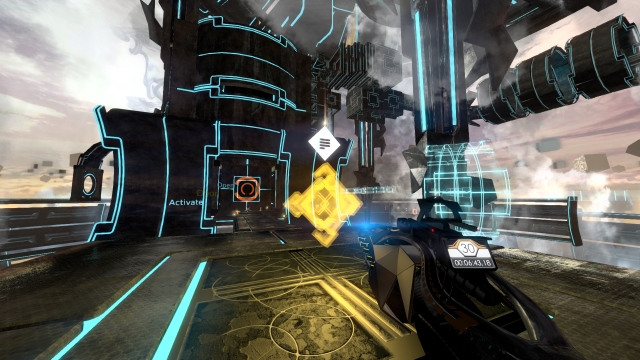 Players collect power-ups as the game progresses, increasing the efficiency with which they can traverse levels. A few of the power-ups include ammo increases and the ability to dash. Collecting these power-ups works as an extra incentive to return to previous levels and improve your previous score.

DeadCore is the most visually noisy game I've ever played. Each level is accompanied by a background that has floating platforms, thunderstorms and other unnecessary imagery filling the screen. What makes these visual additions annoying is the fact that game often suffers from FPS drops, which would likely be less frequent given a far simpler background environment. One element of the visual design that I did enjoy was the inclusion of a small LCD screen at the base of the gun. It indicates the remaining ammo, along with the current time that the player is on. It’s a small addition that shows how the game has been designed with the speedrunning community in mind.

The control scheme has been transposed incredibly well as the developers have shifted the jump and shoot actions across to the shoulder buttons, removing the need for players to take their thumbs off the right analogue stick. It's a small design choice that likely goes unnoticed by many, but it's one that drastically improves movability around the controller. 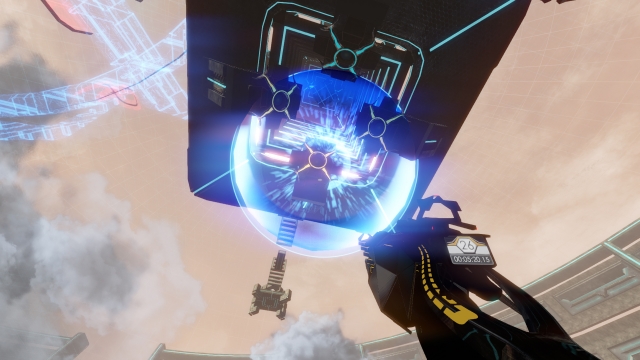 Collectibles scattered across each level add an extra incentive for replayability, forcing players to take alternative routes. The collectibles are a mix of logs, music and other items. I did give the in-game music a try but it sounds uninspired and cheap almost as if it was taken from a royalty-free service. I quickly found myself reverting back to my own music.

The difficulty in DeadCore might put some casual players off. Far too often do the challenges presented during levels sway into frustrating, which can leave your motivation to progress somewhat diminished. With that in mind, I think players looking for something to test their skills will get the most out of DeadCore.

I commend the developer’s attempt at transposing the game onto a controller but I found myself thinking that I would still rather the play the title on a mouse and keyboard. The controller just doesn’t give players the accuracy and movement they need, which is likely what resulted in regular frustration at the difficulty.

DeadCore is a challenging puzzle-platformer that really demands a high skill level of its player base. Visually is it incredibly uninspired and overly busy in places, which can make the occasional frame drops quite frustrating. The mix between first-person shooting mechanics and freerunning platforming make the game a blast to play. For those who want a challenging platforming title on the PS4, DeadCore is right up your alley. For casual gamers out there, I would recommend going elsewhere.

For those who want a challenging platforming title on the PS4, DeadCore is right up your alley. For casual gamers out there, I would recommend going elsewhere.