The original Geometry Wars grew from a cool little bonus in Project Gotham Racing 2, evolving into the Xbox Live Arcade poster child with Geometry Wars: Retro Evolved. Debris Infinity wears the inspiration of that twin-stick shooter classic on its sleeve, bringing fast and furious shooting to the Nintendo Switch, but does it add anything new to the formula? 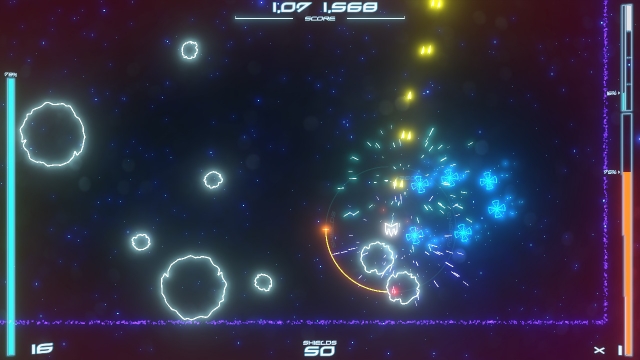 It’s easy to look at Debris Infinity and write it off as a straightforward clone. At first glance it both walks and talks like its genre forebear with its visuals and gameplay bearing a lot of similarities. Like with most things however, the devil is in the detail.

For those that have no idea what to expect from a twin-stick shooter like this, you are placed in an arena and left to fend off the shapes trying to cease your existence. You do this by moving with the left stick and firing with the right with triggers used to initiate a screen clearing bomb or to slow down time. It’s really that simple.

Debris Infinity features three game modes: Time Attack, which sees you trying to score as many points as you can in a set amount of time; Normal, where you try to survive as long as possible (and hopefully net a high score) and Power Wave, where each wave of enemies you defeat extends your time limit. 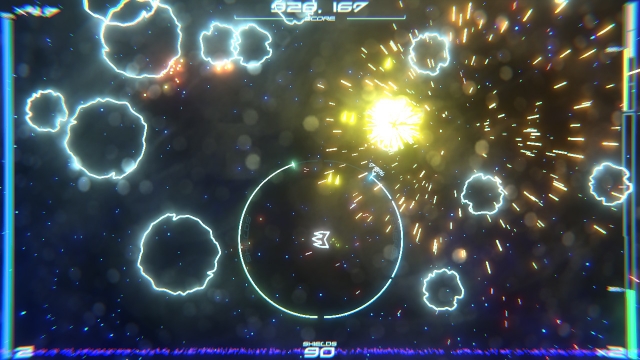 For the most part it plays exactly as you’d expect, the unique differences do stack up to make it feel like its own thing. In addition to waves of enemies you also have to contend with asteroids that try to ruin your day. However like the iconic Atari hit of the same name they also break up when you pepper them with lasers making the arena even more hectic.

Fortunately the game has a slow time feature that uses up a bar that killing things fills back up. This allows you to survive in panic situations where you’d normally feel trapped. Combined with the fact that the game does away with lives and gives you a life bar also helps it feel manageable. The penalty for a small mistake is a little bit of life lost rather than your whole run.

You can also use a third of your time slow bar to fire off a screen clearing bomb. This has the effect of making using your slow time ability an interesting choice as you weigh up whether you’d sooner keep the energy you have for a bomb or use it to manually get out of a sticky situation. All these small changes and quirks to how Debris Infinity work make it stand alone despite its visual similarities to Geometry Wars. 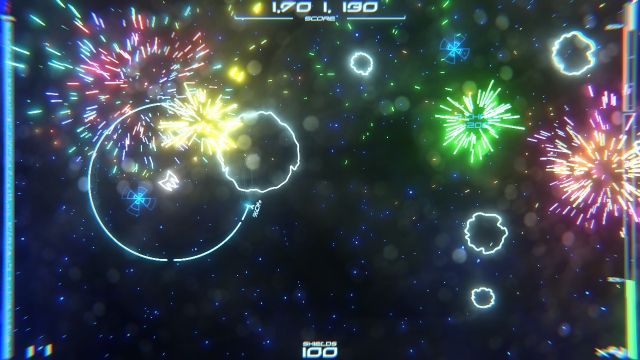 Speaking of visuals, it’s also a rather sharp game aesthetically. The already attractive particle trails from exploding objects are augmented by your laser fire bursting into beautiful streaks of light when you slow time. It might not have the warping grid backgrounds of its inspiration but it’s a solid looking game in its own right. Presentation in general is top notch, with every screen from the menus through to high score rankings having a well designed, consistent look to them.

It’s not going to set the world on fire but if you are after a twin-stick shooter you’ll be picking up for a quick blast whenever you have five minutes then you can do far worse than this. It’s a great little arcade experience for the Switch that works equally well in portable and docked modes. It does exactly what it says on the tin and sometimes that’s all something needs to do.

A great little twin-stick shooter that wears its inspiration on its sleeves but backs it up with challenging wave based fun that might easily become an addiction as you try to work your way up the leaderboards.