Dino Galaxy Tennis isn’t your normal type of tennis game. Chances are you were expecting something more along the lines of Mario Tennis, where you see both sides of the court and the net dividing the two. Vixa Games created Dino Galaxy Tennis with a 2D view from the side giving it the feeling of Pong or air hockey. You will battle your super cute little dinosaur against opponents from all around the galaxy in this super cute game that feels like it was in an arcade in the ‘90s. 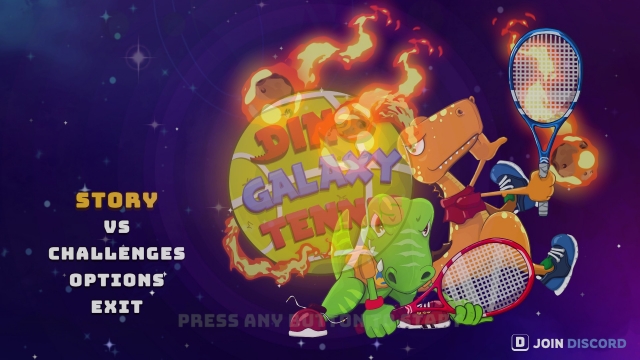 Dino Galaxy Tennis features a story mode that can be played single-player or with a friend in co-op mode, a versus mode and a challenge mode. The story starts with an old dino tennis master named Yatsuzi telling the young dinos how he became the Galaxy Tennis champion and how since then no one has collected all the badges required to take the title from him. The young green dinosaur Eddy interrupts him saying they've heard this story before. Yatsuzi, obviously frustrated, says they've never heard the whole story before because they keep interrupting him before he finishes. Once again, the orange dino named Dexter, jumps in and claims that they are there to learn sweet tennis moves and not hear boring stories. Maybe one day poor Yatsuzi will be able to finish that story. 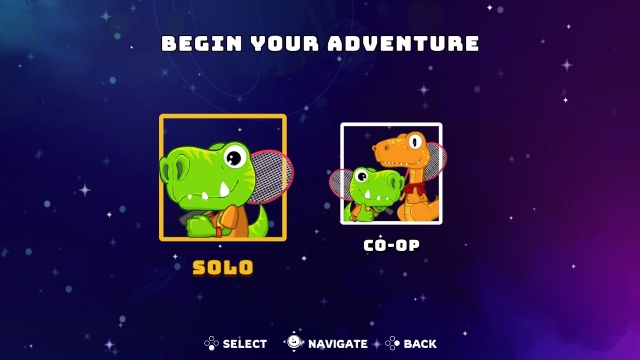 This is where your training begins, Yatsuzi has you running and dashing around the planet and learning how to jump just in time for him to fire a comet at you. This comet you hit with a raquet and return just like a tennis ball. You can also control how the ball moves depending on which button you hit on your controller to return the ball. You can have regular direct hits or you can put a spin on the ball. The difference in the Dino Galaxy Tennis matches is the comet can hit the top and bottom of the screen and rebound heading towards your opponent’s planet. This definitely makes me think of using the sides of the table in air hockey to shoot the disk at crazy angles to get into the opposing goal. 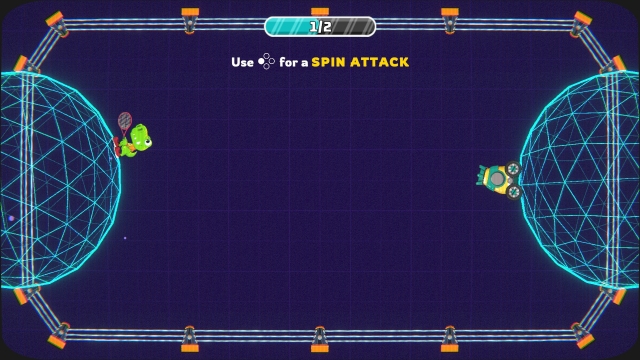 These matches require you to think fast to figure out the angle where the comet will hit so you have a chance to get to the right spot in time to successfully return it.  We all know what happens when comets hit the planet so you want to try to avoid this at all costs, or it will be an incredibly short round. As you play you will learn tricks like how your shots are stronger if you combine it with a jump and that once you have stored up enough energy you can do a special attack against your opponent. 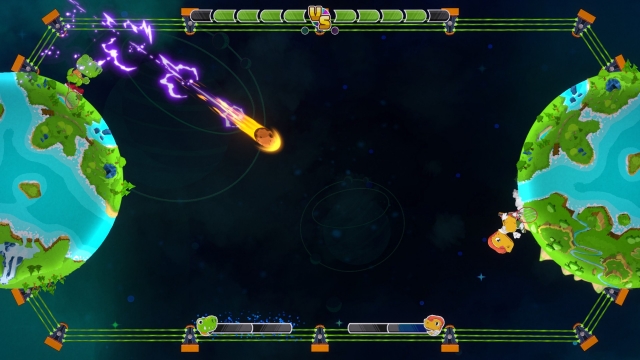 When it's your turn to serve instead of tossing the ball up and hitting it as it’s falling there is a ball machine that you have to hit. The top that shoots out the comet is always moving and switching angles so you have to react fast and hit it at the exact moment you want the ball to fire. I found I was more successful if I took the time to watch how the ball machine moves and try to plan out the angle my comet was heading towards the opponent. It doesn’t make sense to hit the comet straight on so it’s easy for them to return, the key is to make your challenger run for it. 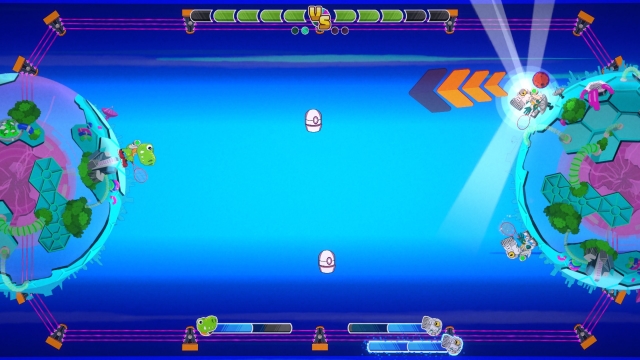 Each of the dinos has their own unique special attack. These special attacks can be done when your energy bar is totally full. Be sure to keep an eye on that bar because these special moves can help secure your win. When you first start playing, hints will pop up overhead to tell you what to do, but after your first match they are automatically disabled. If you want the hints to stay on, it is easy to activate them again just by going into the pause menu. 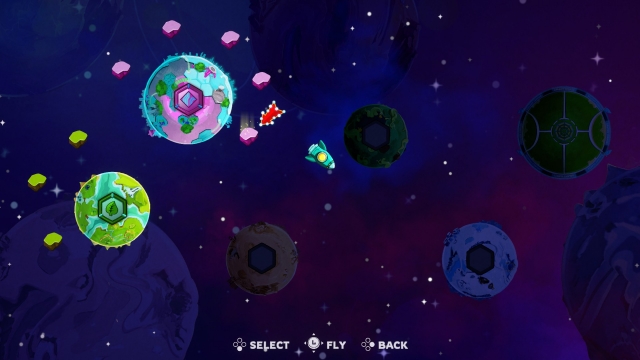 Dino Galaxy Tennis features bright colourful artwork that is super cute and not too detailed. If it was, I think it would be hard to spot the comet/ball. To complement the visuals there is music that is upbeat with a dance type feel to it. During the game your dino will face a huge variety of opponents ranging from velociraptors to robot dinosaurs that will try to stop you from becoming the Galaxy Tennis champion. They all look really unique and not just the same type of character reskinned. As you challenge the different dinosaurs these characters will be available for you to select in the challenge mode. 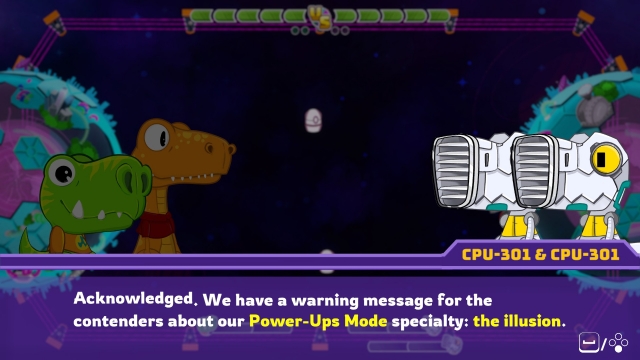 Even though the story mode isn’t the longest, Dino Galaxy Tennis has a challenge mode that is sure to keep you busy for a long time! The story mode is a lot of fun, but I found that the game really shined in the challenge mode. There are four different modes you can challenge, Armageddon where you try to prevent the comets from hitting the planet, Block Breaker where you try to destroy the blocks that are slowly moving down to crush you, Endless mode where you jump and dash over obstacles to avoid the red blocks and Flying where you try to avoid and get out of the way of the targets coming towards you. I especially found the Endless runner mode mode to be incredibly addictive. There’s something about constantly having to dash and jump to navigate the platforms insanely challenging and fun. Reminds me of a lot of games like the skateboarding mini-game in WarioWare on the Game Boy Advance that I used to play all the time when I was younger. 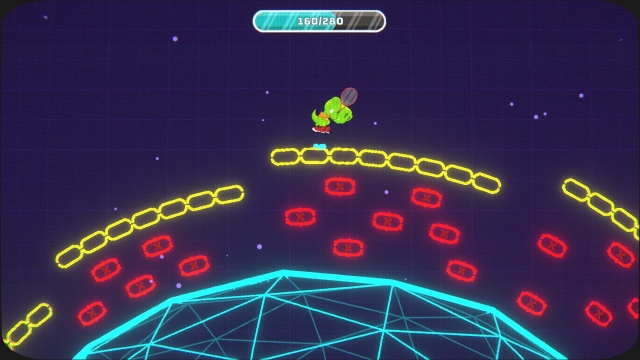 There is so much charm in Dino Galaxy Tennis that it is worth checking out, especially if you love air hockey or sports games with an arcade feel. It manages to be simplistic and challenging at the same time making it suitable for both kids and adults. I appreciate that Dino Galaxy Tennis has a variety of modes that all give you the option of playing local co-op, so whether you work together through the story or have a high score battle in challenge mode you will have a ton of fun.

Dino Galaxy Tennis is a super cute, simplistic and incredibly charming game that can be enjoyed on your own or by playing with a friend locally. Even though the story is a bit short, Dino Galaxy Tennis is full of fun challenges and a versus mode to keep you addicted to getting the high score.