The first time I planned a holiday to Japan was in March 2011. As bad luck would have it, two weeks before I was due to fly, the country was gripped by the most powerful earthquake in its recorded history, not only triggering a devastating tsunami that led to the loss of over 15,000 lives but also a nuclear meltdown at the Fukushima nuclear power plant.

Ultimately, my trip was only postponed until later that spring, but the timing of the disaster proved a bigger setback for the development of Disaster Report 4: Summer Memories, a game series that’s all about surviving natural disasters. But almost a decade later, it finally emerges, and for better or worse, I’m glad it exists.

Undoubtedly, this will be the first time many Western players will have encountered the Disaster Report series (known as Zettai Zetsumei Toshi in Japan). Indeed, in PAL regions, you may have come across it under different titles, SOS: The Final Escape and its sequel Raw Danger both released on PlayStation 2 with much of its content changed for a Western audience. The third title on PlayStation Portable meanwhile never got a Western release at all. Fortunately, as demonstrated by the late-blooming international popularity of the Yakuza and Persona series, we’ve seen a greater appetite in the West for faithfully localised Japanese games. As such, Disaster Report 4 is the first time the series arrives on our shores in unadulterated Japanese form.

Playing as either a slightly customisable male or female protagonist, your experience of surviving an earthquake in a fictional Japanese city is governed by a bombardment of choices from the get-go. How would you behave or react in such times: would you offer to help others altruistically or only for a reward? Would you offer words of comfort, show your impatience and irritation, or be a creepy flirt (note that this is only towards the female characters, and is also applicable if you’re playing a female protagonist)? 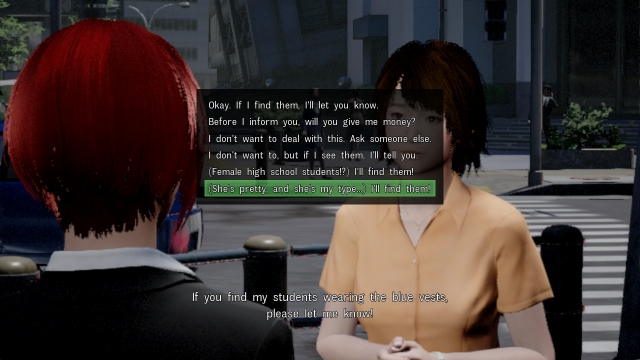 The disaster genre is something of a rarity in video games, the only other example that comes to mind being Disaster: Day of Crisis on the Wii. But Disaster Report 4 is less a Hollywood disaster movie and more akin to a Japanese daytime drama series, both in its tone and its budget.

Despite still looking very much like a last-gen game even after all these years, Disaster Report 4 nonetheless conveys a real and grounded sense of catastrophe. It’s not just in the sight of crumbling buildings and collapsed roads, but also in how it captures its cast of over a hundred NPCs, some with names and minor roles to play while others go by an amusing descriptor such as ‘woman with no sense of despair’.

Even though you’re restricted to a fairly linear path, and also find yourself circling back to previous areas more than once, there’s a variety of environments you encounter, from flooded residential blocks you have to navigate via lifeboat or a school gymnasium overwhelmed with frustrated evacuees. 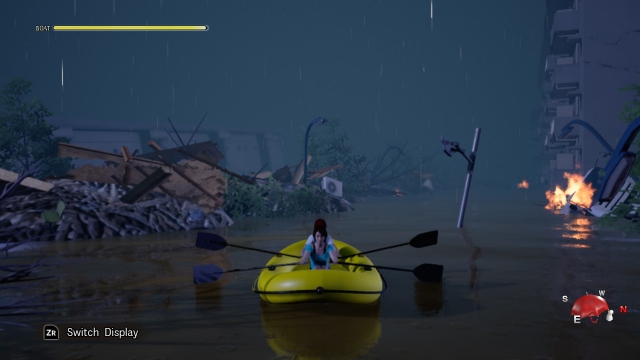 Your impact in the overall scheme of things is pretty minimal. Every so often you’ll suffer some tense but scripted aftershocks, for which the most sensible way to deal with is to crouch in a brace position. There’s survival-like stats like hunger, thirst and need for the bathroom to manage, though even when my protagonist was bursting to go it didn’t really impede my progress in the story. The same could be said about all the narrative choices because whether or not you play like a saint or an utter bastard, it doesn’t seem to affect how people view you in the long term, so even with all the abundant choices, this isn’t exactly a Telltale game.

Nonetheless, the main focus is on all the smaller human dramas between characters you meet over the course of the week in the city. As life-changing as a city-wide disaster can be, there’s still young musicians pursuing their dreams, criminals and swindlers taking advantage of the situation, corporate rivalries, and neighbourhood feuds.

There’s so many stories here that it’s no surprise that many characters’ arcs unfortunately get lost and fall by the wayside, even if you can keep a record of each character you meet. Then there’s the ones that take a bizarre turn, which I probably shouldn’t spoil because of just how outrageously barmy they are. It’s to Disaster Report 4’s strength then that it manages to convey its subject matter authentically while also not taking itself too seriously. One moment you’ll come across some truly tragic scenes, but then you can also dress up in an absurd range of outfits like a cowgirl or a sushi chef. You could say the tone is all over the shop but that’s also strangely part of its charm. Hell, the game even advertises itself on in-game billboards and posters.

These quirks ultimately elevate the game from what is otherwise a ropey experience, from plodding controls and camera to some tedious fetch quests, as well as the archaic way every cutscene loads up by temporarily freezing the action and planting the title logo on the bottom-right of the screen. The Switch port is especially rough, not only taking a hit in resolution but also a choppy framerate that’s especially felt whenever you first load up the game. 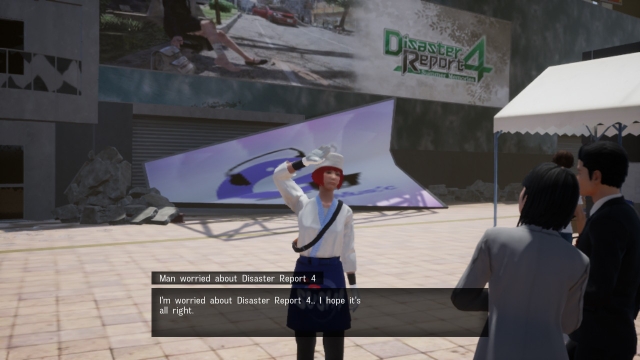 Disaster Report 4: Summer Memories isn’t going to be revelatory, it’s at times ugly and backward, but there’s also nothing else quite like it. Even though I wouldn’t readily recommend it even to fans of quirky Japanese games, I’m relieved that it survived its development to see the light of day.

At best, Disaster Report 4 recalls the mundane and absurd human dramas seen in Yakuza and Deadly Premonition, though shares more of the latter’s rough low-budget execution. Ultimately, it’s an acquired taste but might just scrape through on its peculiar charms to be a cult favourite.

The GrinCast Episode 242 - You Could Just Stab Everyone