Well, well, well, it has been awhile, hasn’t it? When I started this title, it was all the way back in mid-December. Now, after a significant amount of time has passed, I can officially state that I have finally finished all 110 missions that this bloody game has to offer. My reaction to this? Why did this game need 110 missions!?! The first five or six are basically tutorial levels and then everything after that is the same thing, over and over again. It’s machine gun noises, followed by a “mission clear” announcement, which is then followed by more machine gun noises! If there was an award for redundant gameplay, Earth Defense Force 5 would not only win the thing, the award would probably be named after the franchise!

With that being said, though, let’s take a look at the more positive aspects of the game so that we can see what worked before diving into what didn’t. First off, the writing/dialogue in this game is trash. How is this a positive aspect? Because the writing/dialogue in every Earth Defense Force game is trash, that’s what gives it it’s B-movie charm. Yes, if there’s anything you’re going to take away positively from Earth Defense Force 5, it’s the B-movie style that the title presents itself in. The overdramatic, over-the-top squadmates that this title teams you up with are nothing short of brilliant, as their lines vary from incoherent screams to sing-along chants. The amount of times I sang/started up (you can start up songs!) the infantry song was… well it was a lot, let’s leave it at that. 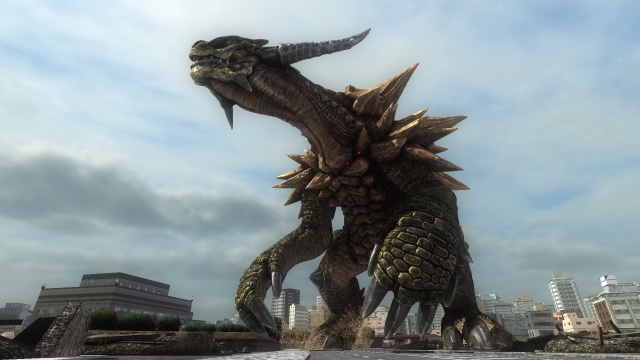 Writing and dialogue aside, we move to gameplay, which is another positive aspect of Earth Defense Force 5. The game goes on to ask; “Hey, do you enjoy blowing shit up?” to which you, a rational gamer, would respond “Why yes, I do enjoy blowing shit up.” Then, Earth Defense Force 5 gives you a bunch of rocket launchers and you proceed to blow shit up. That’s basically how it goes. Unfortunately, blowing up monsters and buildings will only get you so far, as the game has very little in the way of explosive variety. Yeah, you can fire rockets at spaceships, monsters, lizard people, and structures to your heart's content, but you’re never going to harpoon one to the other and make them smash into each other like in Just Cause. All in all, it feels like either ‘fire rocket at thing’ or ‘shoot thing’ is the only string to the game’s destructive bow.

It’s this, coupled alongside the repetitive nature of the missions (as I mentioned earlier), that really hurts Earth Defense Force 5 in the long run. It’s not that the game itself isn’t fun, it’s just a bland, mindless fun that doesn’t have any substance to it. Using the story as an example, the plot of Earth Defense Force 5 doesn’t matter. It literally doesn’t matter. You’re a nameless, faceless protagonist that fights an invasion of monsters, that’s about it. Sure, you can choose to be a Ranger (Infantry), a Wing Diver (Air Force), a Fencer (Heavy Guns), or an Air Raider (Support), but they’re all just different variations on “point at the thing and shoot at the thing” (even the giant robot you get is the same way). Whereas, in Just Cause (sorry to keep bringing it up), you play as Rico Rodriguez, an Agency operative who saves people from numerous dictators by causing mass destruction. Holy cow, now I have context. I have a name and a purpose, and I can actually see the effect I’m having on the game world. It’s not just some dude telling me that “things are bad, please make them less bad” and I do because I’m a good little drone like that. My point is, there’s nothing motivating you to keep going in Earth Defense Force 5, just more promises of bigger and blander enemies to fight. 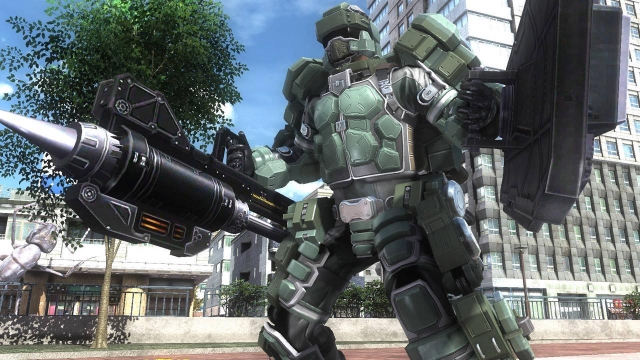 Now if that’s all you want, just bigger enemies to fight, then this game is the one for you. Along with it’s B-movie charm and promises of explosions, Earth Defense Force 5 is a nice distraction as far as these things go. If you really do need to know what happens in-game though, I would highly recommend playing this title with a friend. The split screen co-op is really the saving grace for this game as it allows you to enjoy all of the destructive aspects of the world, without having to pay attention to the plot. You’ll be too busy arguing over who got the higher kill count to really get immersed by all the ‘not-story’ happening around you.

So, with all that taken into account, is Earth Defense Force 5 worth picking up? Well, if you like watching B-movie’s with friends, but would rather play them instead, then yes, Earth Defense Force 5 is the game for you. If you just want to blow shit up, then buy the other game I’ve named dropped two or three times. All in all, this game isn’t a terrible experience, but there are better ones out there.

If you like watching B-movie’s with friends, but would rather play them instead, then yes, Earth Defense Force 5 is the game for you. If you just want to blow shit up, then there are more entertaining games out there.

First Trailer for Earth Defense Force 5 is Out Now