It’s been a few years since Elite returned to computers, with the Kickstarter legend arriving on PC in 2014. It arrived on Xbox One late last year, and has finally hit PlayStation 4.

Elite: Dangerous lets you fly around space as a commander (CMDR for short), and basically follow your whims. Be a trader, mercenary, miner or a pirate, depending on what you want to do. Of course, be aware that there are other players who are in the same galaxy as you, so what you do may affect them and vica versa.

There is a story to follow along with, but it’s kinda hidden away in the Galnet, which is the galaxy’s news service. That is only available to read whilst docked at a station (or in a web browser on your phone/computer), and only a small portion is influenced by players. But that’s the schtick - you’re a nobody, not The Chosen One. I enjoy not being the focus of the story, because most games put you in the shoes of the champion of prophecy or some rubbish. 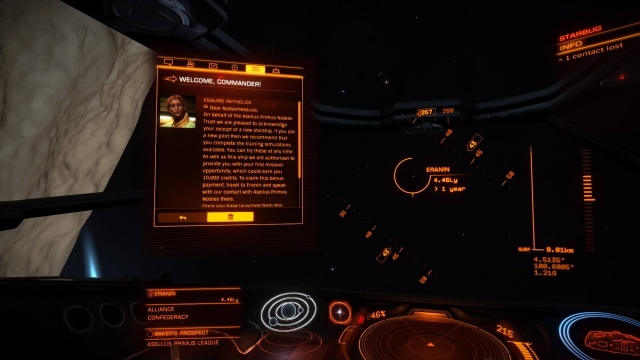 You start off as a newly minted pilot with a free Sidewinder ship and a couple of hundred credits. The Pilots Association will give you another free Sidewinder when you wind up crashing or getting blown to pieces, so at the start there’s little worry. When you start making money and buying new ships - that is when you need to worry.

Every upgrade you make to a ship will add to your insurance cost, known in the community as a rebuy. It’s usually about 10% of the full cost of your ship, so is obviously much cheaper than buying everything again once you lose it. Buy new thrusters, your rebuy is a couple of thousand. Completely kit it out with the best quality components, and depending on the ship it can rocket to a hundred million credits. But, as I mentioned, you can just get a Sidewinder if worst comes to worst.

Since there is so much to do in the game, the easiest way to make money for your first purchases is by doing missions. These can be obtained at most starports and planet-based facilities, and can be practically anything. This company wants you to destroy drones, that conglomerate needs you to locate and bring back 20 tons of coffee, and this security service desires help with a bunch of pirates. Some places only have a handful of missions, others have dozens - but not all of them will be available. Maybe your ship doesn’t have enough cargo space, or perhaps you’re not friendly enough towards the particular faction. 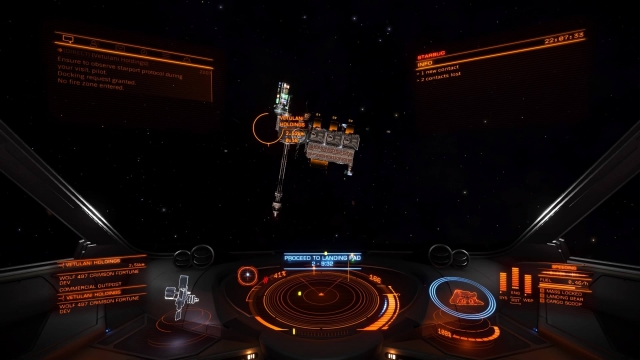 If you’re trying to rank up with the Imperials, then you’ll have a harder time getting well-paying Federation jobs. But you might want the Imperial rank so that you can get a certain ship, or system permit. There certainly is a lot to think about as you make your way across the galaxy.

It is a fully realised (notably realistic in some cases as they predicted Trappist-1) galaxy, too. You can stay in the “bubble”, doing missions, mining and exploring within a few hundred light years - or you can cross the galaxy if you choose to do so. Some people just like showing off where they’ve been, and inspiring others to go there too. Go close to the centre of the Milky Way and land on a planet in your SRV to take some great screenshots. 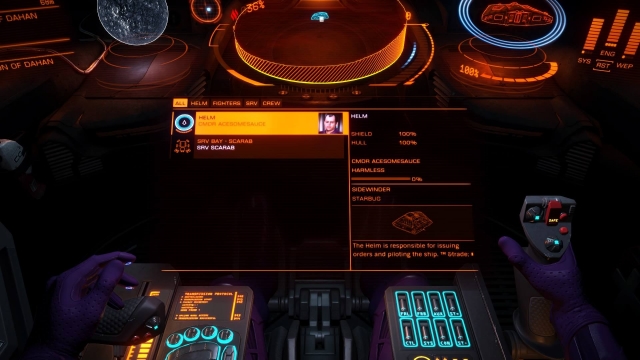 Your free starting craft has a free SRV

The graphics are great on PS4, and the game is designed well enough that it doesn’t cause the fans spin up on an overheating console. I haven’t noticed any difference between this version and running it on my PC, although it’s not like my PC has a super recent graphics card. Audio is also unchanged from the PC version, with all of the effects and voices you’d expect making their way from its older cousin.

The controls are where the big difference comes in. While you can get the same experience by using a 360 pad on the PC version, with the sticks controlling pitch and direction and the buttons doing an assortment of things, the DualShock 4 has a couple of additions. When you turn on “mouselook mode”, the motion sensors in the controller allow you to look around the cockpit. Also, the touchpad across the middle of the controller gives you direct access to the four main panels.

Coming from a flightstick to the DualShock 4 is a shock, but the tutorials do a good job of helping you through them. The best thing is that you can start the tutorials while the rest of the game is downloading. 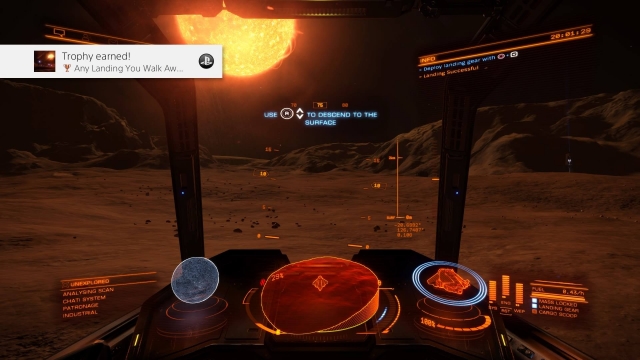 The Elite Dangerous: Commander Deluxe Edition gives you access to all of the Horizons season pass content, including the upcoming Return, which features the main aliens of the series, the Thargoids. At the moment you’re unlikely to stumble across any alien stuff without checking it out online first, to see where you should go.

I’d like to score this higher given how much content there is, and compared to similar space games it really is among the best. However, if you decide to be a space trucker, and ferry goods or passengers from one arm of the galaxy to the next, you’re going to be bored. There’s just nothing to do whilst you wait literally 15 minutes from warping into a system to arriving at a space station. On the PC, at least you can alt-tab out to check your email or watch Netflix. Console players have nothing to do, and can’t even read the GalNet, as you have to be docked to do that.

If you’re planning on playing with some friends, then you will at least have someone to talk to. If you’re planning on some solo gaming, then you’ll spend at least half of your time twiddling your thumbs waiting to arrive somewhere. There’s a fine line between realism and boring, and unfortunately Elite: Dangerous doesn’t always straddle that line perfectly. There’s the excitement of being attacked, the calm of mining an asteroid belt, and an unhealthy dose of flying in a straight line. 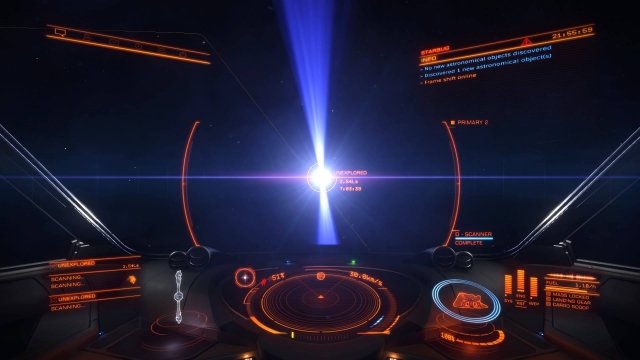 Though at least there are some nice sights