Racing trucks is a lot different to racing cars, you know. If N-Racing’s FIA European Truck Racing Championship (I’ll refer to it as ETRC for short thank you very much) does one thing right, it’s letting you know this fact.

There are 15 practice runs you’ll have to go through before starting your career, and trust me, you will need them. ETRC does a fantastic job of giving these five ton trucks with real weight, along with a much increased stopping distance. You certainly can’t fling them around the 14 Formula 1 tracks (unfortunately, none in the UK) included in this game as you would a Subaru Impreza, modified to 800bhp.

One of the important aspects that this training takes you through is using water to cool your brakes, which is an interesting dynamic I personally have never seen before. You see, in a truck, brakes are very important, because all that weight needs to be stopped effectively. In the bottom right of the HUD, next to your speed, you have indicators for each corner telling you the remaining life of each brake, as a percentage. 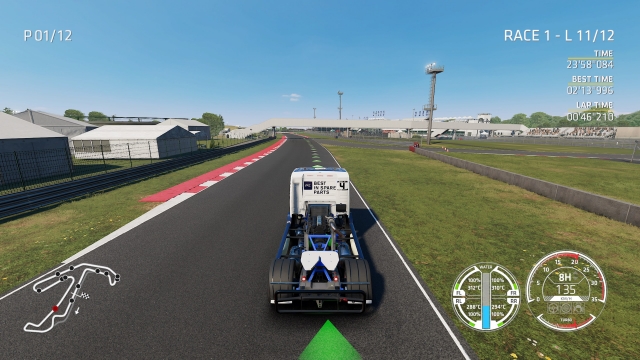 Failure to properly cool your brakes and keep them roughly in the range of 250-500 degrees C will inhibit their effectiveness. The water tank isn’t an endless well either, so careful planning should be required – however, I have never run out of water in any race, even the long 12 lappers, so I never had to plan my use.

It’s an extra dynamic that means that ETRC isn’t a racing game you can just jump into and win. Cornering in these trucks is difficult, and among the 12 laps in the long races, you’ll do well to not spin out once. In fact, even the AI frequently overshoots corners, locks up their wheels, or accelerates too quickly out of a corner and struggles for grip. It adds to the realism that even the AI doesn’t just hug the driving line, as they do in so many other games.

What doesn’t add to the realism, though, is the collision damage. Hurtling yourself into side railings might cause your windscreen to crack, but visually it would be difficult to suggest that you have just ploughed into something at 100mph, which is what the trucks are limited at. You can remove this limit in Race Now, however you then drop to the back of the starting line up in your races. Mechanical damage does take its toll though, and if you manage to bugger your turbo, you’ll have problems. When you come out of the actual racing, what else is available is very limited. There are two championships available in the career mode, the standard European Truck Racing Championship or the fictitious World Series. In both, you can select which events you take part of, initially accepting short contracts from racing teams who will loan you a truck to complete said event. The weekend events are the big hitters, with multiple races and practice sessions in each one. A single 12 lap race can take on average half an hour, which is definitely a point that will turn people off this game.

It’s not until you win a few of these race weekends and impress the racing teams that you’ll get an extended contract, at which point you can then start customising your truck how you want. Up until that point, you’re just racing what you’re given, although there is some tuning you can do before the race. But there’s nothing like sticking go faster flames down the side of your truck, is there?

The World Series tour includes some slightly different trucks, which are a little faster, with the downside that they’re more difficult to control. It adds some much needed variety, because the rest of the trucks feel very samey. Yes, there are 45 different trucks included, but each has very little difference when you get behind the wheel. Turbo is vitally important in each, and getting up to gears 7H and 8H as quickly as possible is imperative for strong acceleration out of corners. If you’re not careful coming out of a corner with the turbo spooling up, it will send the back of your truck out, so precise control is needed. 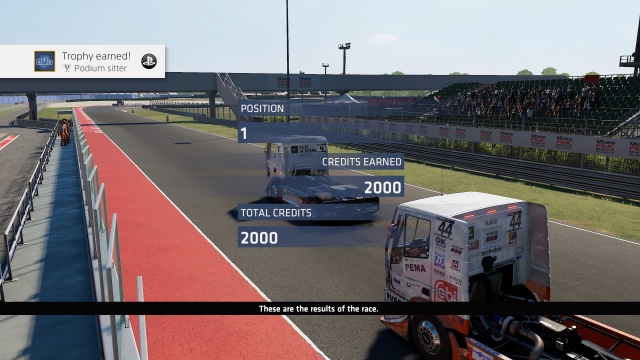 Outside of the career mode, there’s the obvious Quick Race and build-your-own Championship modes, alongside split screen and online multiplayer. I played this on my PS4 Pro on a 4K TV, and graphically it’s OK, for a racing game. If you stop on the track and look at the trees, you’ll realise that they’re just a plus shape coloured green, but jaggies and the like aren’t noticeable at 4K that I understand are present on the standard PS4 and Xbox One version at 1080p. It is quite evident that it’s not running at 60fps too, although 30fps is passable for a game like this.

The main issue with ETRC is that whilst the racing is accurately realised, the rest of the game feels shallow. The announcer who talks to you over the radio repeats the same phrases again and again, with the only option to turn off all the announcers completely or put up with it. The events will undoubtedly put people off because of their length, and the fact that you can’t go into the game and immediately customise your own truck is a little odd.

But for die-hards this game will be an easy sell. For everyone else, not so much. 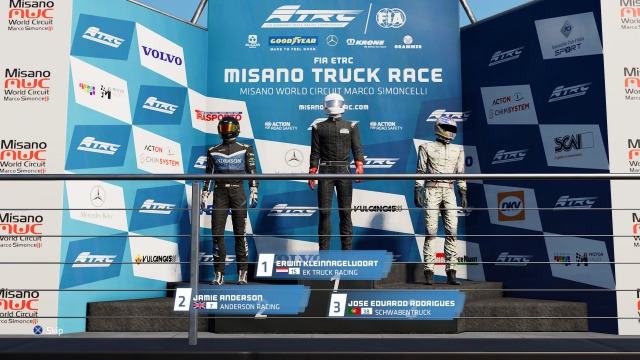 If you enjoy long track races, and want a new challenge, ETRC is almost certainly that. However, if that’s not your thing, there is nothing this game does that will lure you over.