There’ve been a number of great games released fairly recently that have enhanced the Metroidvania genre. Titles such as Guacamelee, Steamworld Dig and Shovel Knight have all taken the classic gameplay tropes of the Metroidvania subgenre and stamped their own personality onto it.

Forma.8 fits neatly into the subgenre, with its main strengths coming from a mixture of exploration and puzzle solving. You play as a small drone who is sent to explore a mysterious planet along with several others of your population. Due to a crash landing you’re separated from your companions and are left alone to decipher the planet’s many mysteries. A sense of loneliness permeates every area of the planet. Whilst there is little storytelling, players can decipher their own meanings from the varying environments and secrets that the planet holds. In fact, the planet itself appears to be the game’s main character. Much like the Metroid series, Forma.8’s world has a personality that speaks volumes.

It helps that the game looks brilliant as well. The developers, MixedBag Games, use a simplistic 2D style that contrasts dark hues with bright colours. The environments are plentiful and varied; offering cave systems, underwater passages, temples and futuristic compounds for the player to explore. Each zone is complemented by the game’s use of a minimalist soundtrack, which adds even more atmosphere to areas. This presentation makes exploring the planet a joy; all the more beneficial considering the game’s slow pace.

Exploring the planet takes time and Forma.8 gives you very little guidance in terms of what objective or location you should be pursuing. The map is serviceable but it essentially only gives you a brief estimate to your location. You’ll know which area you’re in, but nothing else.

The gameplay consists of a mixture of exploration, puzzle solving and combat. Enemies come in a range of alien species simply defending their territory, to large robotic structures that are activated to kill. You can bypass a lot of fights, beneficial considering how ill-equipped for battle the Forma.8 drone is. You’re equipped with a small shock wave, bombs which can be shot at enemies using the aforementioned weapon and a short boost to help avoid enemy attacks. Combat against smaller enemies can be frustrating, both due to a lack of weaponry and the weighted way in which Forma.8 controls. That’s not to say the controls are bad in fact they’re perfectly attuned to make the game more difficult. I suspect though that certain players might get frustrated if they approach the game with an aggressive mindset. Forma.8 is not a combat drone and instead players should pick battles carefully in order to keep their health up and avoid certain destruction. 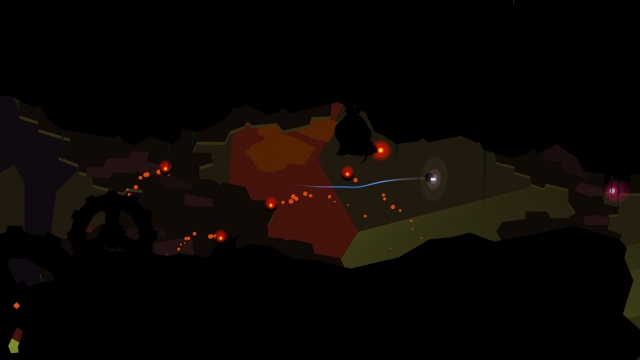 Despite an avoidance on combat the game shines when it comes to bosses. Each boss requires a different method to defeat it and acts as both a miniature puzzle and intense fight. Whether it’s by using a boss’s environment against them, redirecting a weapon back to them or simply participating in a thrilling chase sequence, Forma.8’s varied and well-designed bosses are often the highlight of the game.

Less can be said of the game’s puzzles, which are well-intentioned but vague in their solutions. On numerous occasions I believed I had stumbled into an area that I couldn’t pass, before accidentally figuring out the solution. The puzzles are in-keeping with the game’s vague and mysterious premise, though an optional hint system would make the experience less frustrating.

Overall Forma.8 is a good, if slightly flawed take on the Metroidvania genre. Its barebones story is divisive as it depends almost entirely on players’ interpretations. The gameplay is satisfying at times and thrilling at others though its inconsistency is what holds the game back. For those wanting to explore seriously stylish and striking environments, you could do much worse than Forma.8.

Exploring the stylish world in Forma.8 is a joy. The endless backtracking can be a chore but overall Forma.8 is an enjoyable sci-fi title that fits the Metroidvania genre.