Sometimes the best laid plans don’t always go as you would expect. You can spend hours, days, maybe even weeks thinking of how to position your squad to ensure that all possible tactics are covered. When the time comes to commit to the plan however, who knows what the enemy will do? You may have accounted for them flanking left, maybe even right, but did you consider that they had an extra unit who was behind you the whole time? it is back to the drawing board once again for this turn.

This is Frozen Synapse 2, the sequel to 2011’s release of Frozen Synapse, that sees players dive headfirst into tactical gameplay unlike anything they have seen before. Every movement, every action and every reaction are all carefully planned out by the player before unfolding in five second bursts of action. Bringing a number of new features to the table along with its gameplay, the title has a lot to live up to. 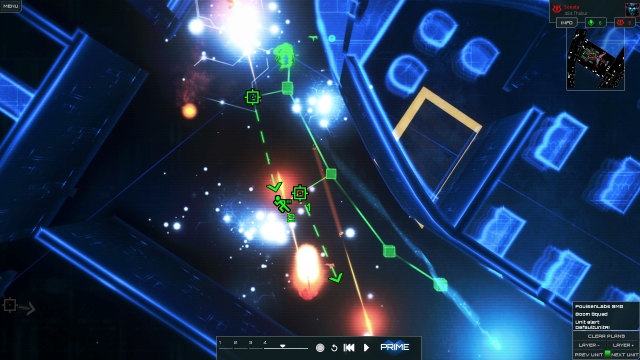 At the core of the experience, players will find tactical, turn-based gameplay that requires logical thinking and strategy in order to succeed. It is not just a simple task of moving a few units around, as you’ll have complete control over every part of their plan including movement, aiming, when to engage a target, waiting times and so much more. At first it can be overwhelming just how many options are available to players, but quickly the use of each command is made clear and a players knowledge of the battlefield quickly grows.

Thankfully, during the planning phase of any given turn a player is free to experiment as much as they want with their plan without any time limits. They can simulate several different approaches to the same mission objective or perhaps see if a shot can be made from afar. To make things even more of a time sink - in a good way - players can also simulate the movements of the enemy and see if they can develop the ultimate plan to any possible counter attack. When ready, ‘prime’ your plan and watch it unfold in those thrilling five second burts.

This gameplay loop is how players will mostly spend their time in Frozen Synapse 2, be it in the single player or multiplayer component. The learning curve might be fairly easy to overcome but the same cannot be said for the user interface, which can create moments of confusion. The same can be said for the new single player campaign, which sees players enter a living system where AI-controlled factions compete in a race to be the first to find a number of artifacts. 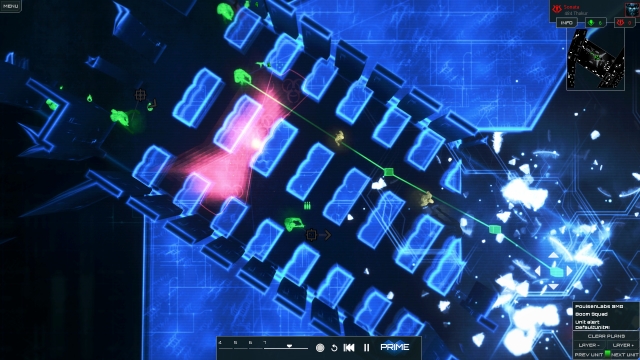 Though the systems in the city mode do go more in depth than just a ‘race against time’, such as needing to manage income, forces, relationship with factions and more, the gameplay of the encounters that take place across the neon filled city are still the same formula of careful planning. There is plenty to keep players engaged within the single player but multiple playthroughs might become tiresome as not much changes from each session. This includes the maps you’ll battle on, which take place within the many different buildings and locations within the city. The layout might change but you will see the same map a few times over the many hours you might spend with this title.

On the presentation side of things though, Frozen Synapse 2 holds up well with a simple and clean design that captures the futuric setting perfectly completely with neon lights aplenty. Watching a battle play out in full at the end of a level is satisfying as your soldiers perform a violent dance of destruction on enemy forces. This is made all the more appealing thanks to the fitting soundtrack, bringing the world to life with tracks that capture the mood and tone of the city and missions. It isn’t all prefect on the presentation front however, as performance is a mixed bag,full of loading screens with varying times depending on how lucky you are. It makes sense given how much computing is taking place within the gameplay, but it does impact the enjoyment during longer play sessions.

Of course, even with the few negative points, the main attraction to Frozen Synapse 2 is the multiplayer component that sees players able to face off against each other in thrilling battles. Thanks to the matches taking place in the background, players are able to plan their move for as long as needed, prime when ready and then move onto something else. Not being held in to a single match players are free to have several matches running at any given time and even carry on with the singleplayer while they wait for their opponent to act. This is where the title stands the strongest and is the reason players will keep coming back time and time again. 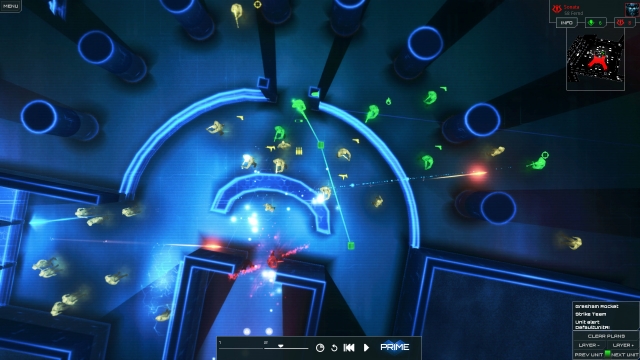 In the end, Frozen Synapse 2 is a solid and robust experience that allows players the means to fully explore and master tactical combat. It has a number of faults that stop it from being a masterpiece and lacks replay value within the single player campaign but the endless possibilities of multiplayer saves the title. If you enjoyed the first Frozen Synapse you will love this sequel, and for those new to the series, you are sure to enjoy your time, just get ready for plenty of loading screens and a few problems in the user interface here and there. Still, nothing a few updates won’t fix.

There might be some faults throughout but they don't stop Frozen Synapse 2 from being a solid sequel that is worth your time.

The GameGrin GrinCast Episode 165 - That's the Number Not the Word