Sometimes a game, although not a perfect experience overall, can be just the time sink you need. Galactic Mining Corp is that exact experience. It’s a game your likely to understand quickly, although it does include a few rough edges. Despite that, it’s very easy to sit and keep chipping away at rocks as you attempt to conquer the intergalactic economy.

You could be forgiven for thinking Galactic Mining Corp looks a bit daunting upon initial inspection. At its core though, the game's fundamentals are easy to grasp, with a forgiving gameplay loop that allows everyone to play at their own pace. The task is clear: build a massive company headquarters in space. To achieve this, you need to harvest minerals and planet cores in order to either upgrade equipment or to sell for profit. 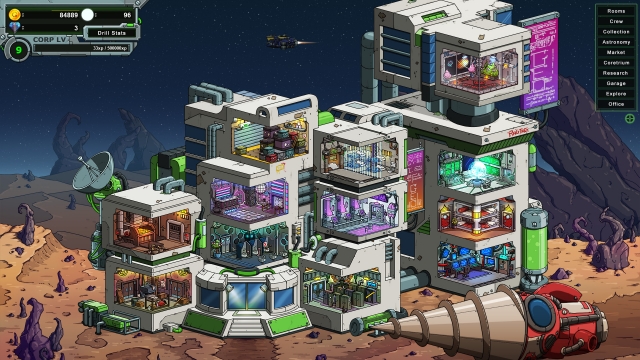 Galactic Mining Corp’s gameplay is split into two parts. Firstly, you have your management area. Here you can upgrade your drill, headquarters - pretty much anything you’d normally expect to upgrade in a management simulation. The second part is getting into the dirty working of mining. Take control of a drill, move yourself to a planet and dig like crazy.

Your management area is drip fed to you for the first 30 minutes of the game. Rather than burdening you with every screen, Galactic Mining Corp gives you a couple of new areas at time, making everything a bit more digestible. Hitting certain progress points will unlock new areas of the management screen. Even if you still find yourself scratching your head at a certain point, each area has an easily accessible tutorial in the bottom left corner. Galactic Mining Corp is designed to be understood as easily as possible, but even for those who don’t grasp it straight, work has been put in to ensure the information is easily found, preventing the game flow from being broken up. 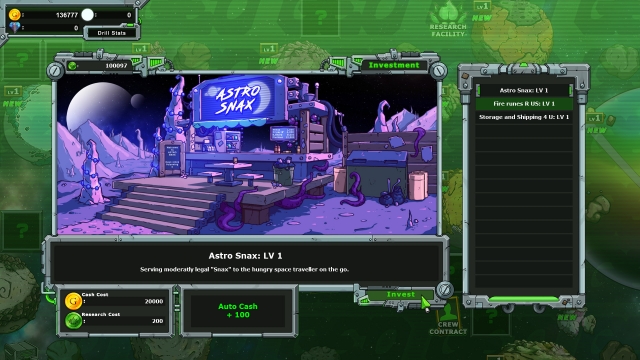 Galactic Mining Corp focuses on simplicity when it comes to the administrative side of things. There’s a wide variety of options at your headquarters, but each area is fairly shallow in what it offers. Which may be a negative to some people, but it does try it’s best to cater to the best of both worlds. Optimising your company's output is something you can do throughout Galactic Mining Corp, however simply clicking every upgrade button you see isn’t going to leave you at a disadvantage. This is supposed to be relaxed though, so if you’re looking for something that allows total management control, this likely isn’t going to be for you.

Moving away from the admin side of things to the gameplay side of things, there is only one focus: drilling. After investing your capital into exploring new areas of space, any discovered rocks or planets can be mined, with the goal being to take it’s core. That core can be used to level up anything from drill health to automatic gold income.

Sadly this is where the game is at its most tedious. The drilling takes inspiration from games such as Steam World Dig or the old Flash game Motherload, having the player mine resources from certain squares. Drilling is so mundane however, which is caused by a combination of things. Controlling the actual drill is something that sticks out like a sore thumb. Using the mouse, you simply wave this drill around, eliminating any kind of challenge from the game. It’s far too easy to dig straight down into the core of whichever rock you’ve chosen too. The whole drilling experience feels so clumsy when compared to the well-designed management section that makes up the other half of the game.

As your drill gradually decays from all the mining you're doing, it will explode upon depletion of the health bar. You’re given an unlimited number of drills, but if one explodes you will have to begin your excavation from the beginning again. Again, this is done to smooth the game of any punishing edges, but it comes at the cost of sacrificing any desire to explore the area you’re mining. Ultimately, the games focus on simplicity made for an accessible management section, but created a gameplay loop which can basically be described as “drag mouse down, hold left-click, reach the core”.

The Motherload references don’t just stop with the gameplay style either. Galactic Mining Corp’s art style seems to be clearly inspired by the iconic Flash game, too. It’s well designed though, especially the character portraits. Giving a face to your crew makes it easy to create actual personalities for each of them as you play.

Galactic Mining Corp commits itself to being an accessible game in all areas, but in doing so, creates a game that likely doesn’t tick the box for most people. For those interested in a management-sim, there’s likely not enough depth here to keep them playing. Players more focused on the gameplay side of things will also likely lose attention quickly, with much more rewarding experiences available on Steam already.

My experience with Galactic Mining Corp definitely ticked the positive column more often than the negative. Sadly, the game's commitment to making the overall experience easy to use and accessible for everyone, means that neither side ever gets the experience they truly wanted.

Galactic Mining Corp Rocking Onto Steam in May