Gang Beasts works as a social gaming experience in the sense that its ridiculous concept of gelatine characters beating each other up is just as fun to watch as it is to play. A lack of Dualshock 4s didn’t equate into a lack of enjoyment as those of my friends who didn’t get a chance to play could still laugh their heads off at the rest of us making fools of ourselves. Whether or not developer Boneleaf designed their game specifically with the Let’s Play generation in mind is ultimately irrelevant to the game’s overall technical quality and playability, which I found to be an occasionally messy package once the highs of those initial laughs faded.

But those laughs were some of the loudest I’ve blurted out from a videogame in some time. Gang Beasts commits to its inherently funny idea of making a beat ‘em up with characters that play like spineless sloths. Moving feels like sludging through slime and I often found walking up to an opponent to be a battle within itself. All the basic attacks are carried over from genre classics, but punching, kicking and headbutting in Gang Beasts relates more to slapping someone across the face with a dead fish than uppercutting them into the stratosphere. 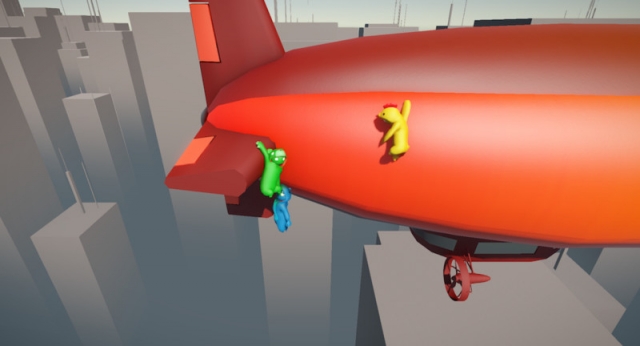 Of course, this is all intentional and the main source of the game’s rib-stitching humour. Characters can also grab onto each other, as well as walls and other objects in the arena. Holding on for dear life quickly becomes the most important mechanic in the game, and the arm wrestles that occur between players trying to throw each other out of the match can be truly exhilarating and utterly hilarious to be a part of. This is heightened with a larger playing group, and the online matches I played with six or more players were some of the best times I had with Gang Beasts.

While chaotic at its core, I did find myself improving at the game as I started to make some sense of all the craziness. At first, I would only take someone out if I went down with them or by sheer dumb luck. But after an hour or so, I discovered that trying to knock out my opponent with a flurry of punches would grant me a couple of precious seconds where they would be incapable of fighting back. This changed my approach to matches, even if my success was still limited. Experienced players would be creeping their way up walls and finding creative uses for different objects, but I found that the uncontrollable nature of Gang Beasts left the playing field fairly level. 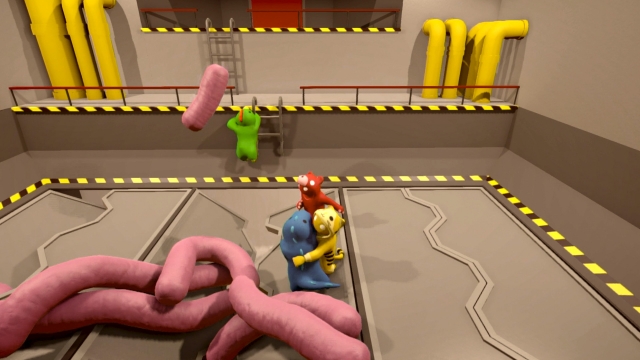 With such a novel and fun concept, naturally, some of that initial shine does wear off once the novelty becomes familiar. Online matches with fewer than four players are either one-sided or end up going nowhere if everyone decides to goof off rather than compete. And even after playing multiple rounds, I still found too many games ended in draws with the mechanics not offering enough of an advantage to players once they knock out their opponents or get them in a lift. The stages do help with taking out players with collapsing ground or oncoming traffic, but I found myself getting more and more distracted if I fell early rather than enjoy the remaining characters battle it out.

Technically, Gang Beasts on the PlayStation 4 can be as sloppy as its jelly characters. Whether I was playing offline or on, the shadows could turn spastic and the framerate could falter or, occasionally, completely disintegrate. I even had a couple of online matches where the environment wouldn’t load at all. However, I cannot be sure if this is a result of my admittedly stone age internet setup. The game only rarely becomes unplayable as a result of these shortcomings, but I was surprised by how many corners seemed to be cut given the game is now two years old. 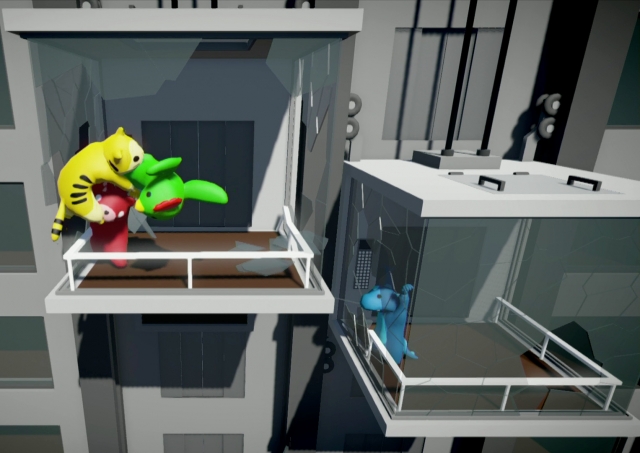 Outside of the standard ‘Melee’ mode, Gang Beasts has three other ways to play. ‘Gangs’ teams up the players and has them fight it out, ‘Waves’ is a cooperate mode which has players taking on bots, and ‘Football’ is, well, football. I found each of these to be welcome departures from the core mode, even if none of them grabbed my attention for quite as long. Also, finding matches in these complimentary modes took me a lot longer than with ‘Melee’, which limited my time with them.

That’s not to say I didn’t find myself coming back for more Gang Beasts most evenings. The wealth of character customisation and the pure enjoyment of introducing such a bizarre game to friends is enough incentive for me to keep returning to Beef City.

Even if I’m less than impressed with some of the game’s technical shortcomings and overbalancing, Gang Beasts still delivered some of the funniest moments I’ve had in gaming, and that joy will stay with me for some time.