The other day, like I usually do I was scrolling through all the games on the Xbox Game Pass page trying to pick what game I wanted to try out next. There was one game that stood out among all the others. It wasn't a brightly coloured image like the others, but a black and white drawing showing flying robots, frogs, crocodiles and a cat. Though this is not just any normal cat, it's a cat in a mech suit. The game is Gato Roboto which instantly sounds pretty cool!

At the start of the game we join a kitty named Kiki flying through space with its owner. Thanks to Kiki stepping on a bunch of buttons on the control panel the captain has to make an emergency crash landing trapping him inside of the ship. It is now up to Kiki to explore this alien outpost filled with crazy labyrinths and enemies, using the mech suit that somehow is made to fit anyone no matter if you are human or cat. While on your mission the captain will talk to you using the radio collar that you are wearing to give you instructions and hints. 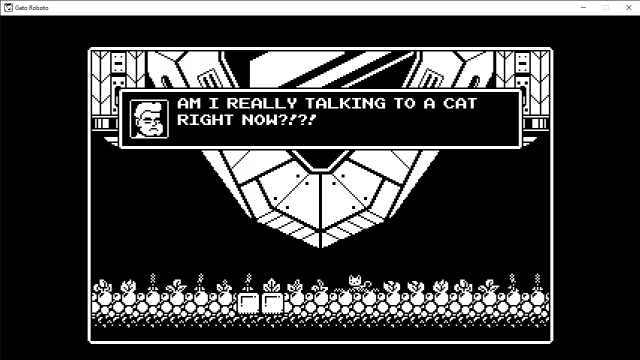 Since I was born in the ‘80s I grew up playing the Nintendo and the Game Boy. This game gave me so many nostalgic feelings. It starts off in black and white featuring crisp pixel graphics with crazy sounding voices for the human characters. It has a great sense of humour and an awesome chiptune soundtrack. Being a huge fan of retro games, especially 2D platformers I was so happy to see the awesome job that developer Doinksoft did with this game.

As you start exploring the level looking for your mech suit, you will notice a lot of similarities with another famous platformer, Metroid. Especially once you discover the mech suit and have the ability to shoot. You come across doors that can be opened with your normal blaster shot and others that need a missile to open. There are even special rooms with upgrades for your mech suit just like when Samus was powering up. While playing I really appreciated that the enemies did not appear until you had the suit and a way to defend yourself instead of trying to avoid a bunch of enemies with no way to attack. I love that Kiki the cat has a main nemesis that is an evil mouse, just seems fitting. The boss fights were definitely challenging at times but not ridiculously hard that you will want to quit. 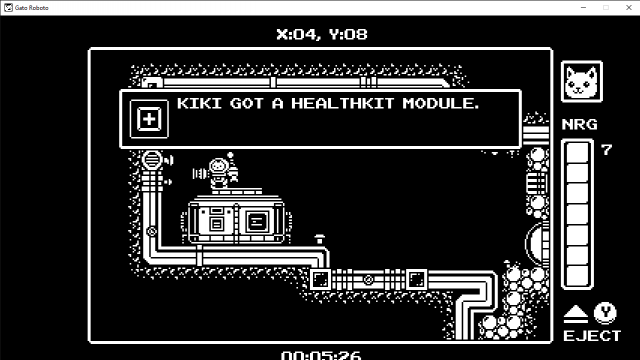 The controls in this game felt great. Being able to go in and out of the mech suit was really a neat mechanic. When Kiki is out of the suit you are able to fit in small areas, swim, crawl up walls, run fast and jump long distances then being in the suit you have all your weapons ready to use to attack enemies and open new areas. I played it on both the Xbox One and on my PC using an Xbox controller. The controls were very good so any time I died in the game it wasn't the fault of the game. It's nice to know my screw ups were all my doing. Level wise there are areas that you will not be able to access at first until you get the right upgrade or complete a task in another room. So there is definitely backtracking required but luckily you have a handy map to give you an idea of where you currently are and where you have been. It will also show you where all the save rooms you have found are so if you need to save you know where to go. 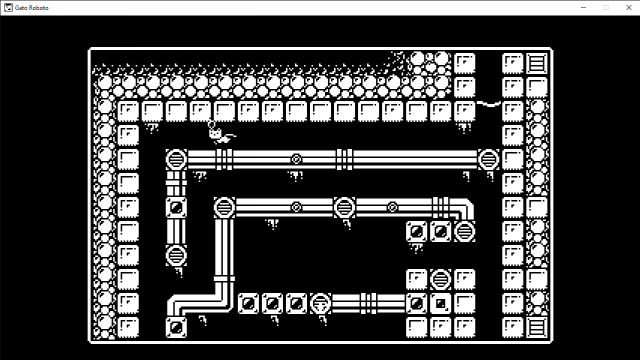 This is not a very long game, especially if you have played a lot of games like Metroid or other platforming games in the past. The games takes about five hours to complete but that totally depends on the player. I liked the shorter length of the game since I don't seem to have tons of hours to dedicate to each game so it's nice to find a shorter one that I am actually able to complete.

Gato Roboto is the kitty cat Metroid game that you never knew you needed! Xbox Game Pass users really have no excuse not to check out the game. Even if you don't have a Game Pass or an Xbox One, Gato Roboto is very inexpensive to buy and is also available for the Switch or Steam. This cute action packed kitty platformer is definitely worth the time and the small price tag. Gato Roboto (Reviewed on Xbox One)

A nostalgia filled throwback to the Game Boy and awesome 2D platformers featuring super cute characters and a great soundtrack! If you love classic games or pixel graphics this is a must play!