When I first reviewed Graveyard Keeper last year, I was a big fan of the unique Stardew Valley meets Project Highrise style of the game. Since then, updates, a free DLC adding farm and alchemy automation, and a regular stream of tweaks and bug fixes has kept me coming back to it regularly. The recently released Stranger Sins DLC is another string to the bow of a game that has come on nicely since its original release.

The main bulk of the content here is a new quest-line that takes you around the village learning a bit more about the inhabitants. There's especially a lot more to learn about Gerry, which is nice as he was largely just comic relief initially, so it’s good to see him become more of a character. There’s also a fair few new roles for characters that previously had little to no involvement in the game. There were a few NPCs previously who just stood there like stuffed lemons with no real purpose, most of those characters now actually have something to do.

And it’s not just NPCs, as you’ll have something new to do now. Not content with being graveyard keeper, farmer, and local pastor all at the same time, our protagonist can now add barkeep to the list of his talents. It’s unclear what the existing tavern owner thinks about this, especially as he was the one keeping you in coin in the early game, but nonetheless, you’ll need him much less as you work your way through the DLC content.

Running a bar amounts to selling all the beer and wine that you are probably already making with the autonomous zombie farms that we got in the last expansion. If you’re not already doing that, then it’s worth investing in, especially as that DLC was free. If you are struggling for money, it’s a great source. There are events that you can host (kind of like Stardew Valley’s festivals) which allow even more sales to be made. It adds a really good source of income, although if you were already rolling in the cash after a silly amount of playtime like I was, then it’s more likely it’ll just be fun to get all the villagers drunk.

As before, there’s a reasonable amount of grinding needed, but that’s to be expected in what is essentially a crafting game. With a quirky story unravelling as you go, it’s relatively pleasant as grinds go. This isn’t one of those games that artificially lengthens itself with grind in lieu of content. I was hoping that maybe we’d be able to visit the town finally with this add-on, but sadly it’s still out of bounds. It is mentioned a bit in the new content so maybe it’s the potential source of a future DLC? Who knows, but it’s a shame there’s still hinting at an area we may never actually see over a year after release.

With about eight hours of extra content, the seven pounds this content retails for is pretty good value I feel. It’s not going to make anybody who didn’t already like the game go out and buy it, but it adds to what was already a pretty addictive game. In short, it’s the kind of thing that you’ll like if you like this kind of thing. 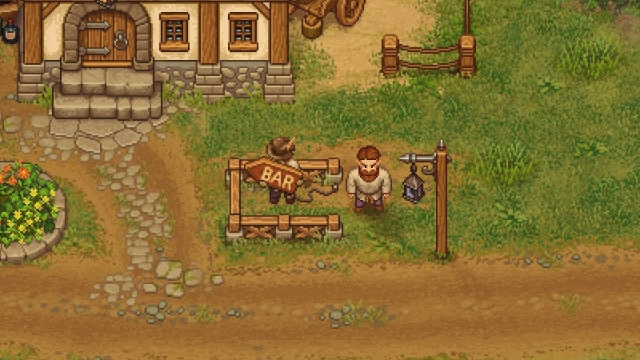 It’s not going to make anybody who didn’t already like the game go out and buy it, but it adds to what was already a pretty addictive game. In short, it’s the kind of thing that you’ll like if you like this kind of thing.