It is always a monstrous task trying to purposefully re-create the magic of another generation. All forms of media dare to walk the tightrope of nostalgia at the risk of plunging into being an outdated mess on launch. Saibot Studios have tasked themselves with Hellbound, a reimagining of the classic first-person shooter. Frantic, fast paced gameplay which delivered classics throughout the ‘90s. Nostalgia is a dangerous tool and investing resources into something with classical appeal is a dangerous risk. It is essential that you nail the aesthetic and the feel as accurately as possible, or run the risk of isolating the fan base you’ve targeted. Yet, I never considered what would happen if you nailed it too perfectly. Hellbound is an incredible take on a long forgotten style of shooter, but comes with one glaring issue - individuality. 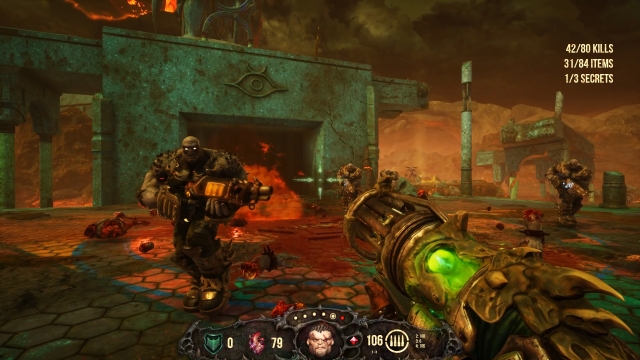 Hellbound finds itself enriched in positives. From its gore to its soundtrack, this game is about as authentic a ‘90s shooter can be without building yourself a time machine. Most importantly Hellbound is a refinement of what made those classic shooters so addictive. Everything is fast paced and action-centric, yet the player has more comfort when in control of the character they’re possessing. Saibot Studios have created something that, when the comparison to the ‘90s classic inevitably appears, people can sit them side by side and see Hellbound as the modern successor.

Hellbound essentially acts as a middle-ground for what a game like DOOM originally was, compared to what it has now become. Which isn’t meant as a knock on DOOM’s newest instalments, moreso to show well Hellbound would slot into that franchise. Helping to restore that grunge feeling to the first-person shooter genre, Hellbound throws away the narrative in favour of a no-nonsense gore fest. Much like those shooters of days gone by, that it wishes to pay homage to, Hellbound makes the player feel like an unstoppable force. This is a masterclass in keeping things simple and giving the player hours of fun. There’s no slowing of the pace in Hellbound. You start, you kill things, you get a bigger weapon and you kill bigger things. That is the cycle and it is just as satisfying as it sounds. 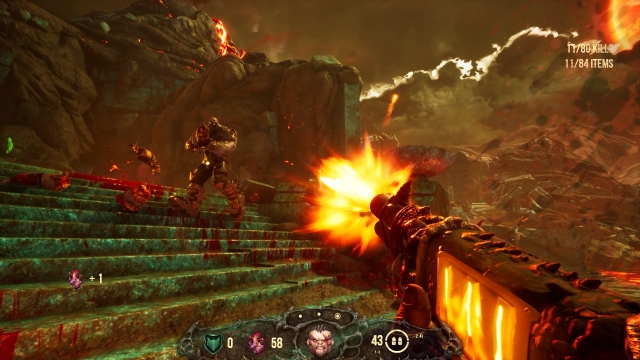 As mentioned previously, there isn’t really a narrative to the game. Hellbound, in its acceptance of the ‘90s-styled shooter, has rejected the modern shooter's persistence to push narrative over gameplay. Removing the heavy story elements to focus on gunplay is something I absolutely love, but if you’re someone looking for some kind of narrative, Hellbound has the bare minimum, at best. Sacrificing even a basic narrative in the hopes of nailing the gameplay was a risky move by Saibot Studios, but it’s one that pays off. Moving around the hellish creatures trying to slay you feels fluid, especially when working in tandem with Hellbound’s well-crafted environments. Although the main campaign wasn’t too difficult, the real challenge and mastery comes in the game's survival mode. Endless hordes of beasts will come at the player until you either quit or die.

With its attempts to faithfully re-establish the ‘90s shooter, Hellbound has two flaws. Firstly the edgy voice acting should probably have been left behind with Britpop. It seemingly tries to channel some kind of Duke Nukem vibe, but misses the mark painfully at times. The dialogue is very forced, trying too hard to recreate something that Duke Nukem itself couldn’t recapture. The second is its identity crisis. At the start I said Hellbound had an issue with its individuality. This is because Hellbound isn’t a perfect homage to the ‘90s, it's a perfect modernisation of the original DOOM. From the audio to its user interface, Hellbound is far too similar to DOOM. Technically, from a gameplay standpoint, Hellbound does so much right, yet you cannot disperse DOOM from your mind whilst playing it. It relies far too heavily on that influence, rather than focusing on what every other shooter from the ‘90s could offer. Especially when the game it so heavily bases itself on has already had a well received reboot this generation.

To play, Hellbound is a fantastic experience. The combat feels great, the movement and pacing is fantastic and it is a joy to simply butcher the hellish demons in front of you. That just makes it all the more disappointing that it purposefully puts itself into the shadow of a game like DOOM. The gameplay is brilliant and the team at Saibot Studios are clearly very talented, but they needed to let Hellbound stand on its own two feet, because it was (and they are) good enough to do so.

Hellbound is a great experience. Although it does rely heavily on the DOOM aesthetic, Saibot Studios have created a core gameplay experience that could be the launchpad of something brilliant.