Herald is a story of choices, existing within a state of constants. You exist within its world as Devan Rensburg, a man seeking his heritage. You are a steward on the HLV Herald, a merchant ship sailing under the flag of the Protectorate (a reimagining of the Western continents united to form one global superpower). Beyond a few key constants, you exist within this world to make choices and to live with the consequences they bring about, whether they’re immediately clear or not. This is Herald’s key strength: providing the player with the freedom of choice, all the while maintaining a tight grip on the reigns of its overall plot. It is not, however, the first thing you’ll experience when you step into the world laid out before you. 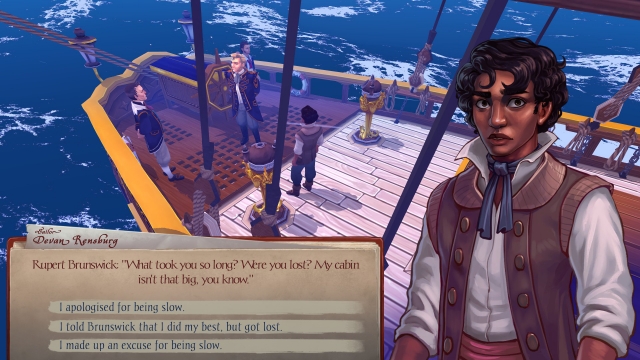 Initially, as with most titles, you are greeted with the aesthetics of the game. In this department, Herald’s wonderful art style outshines a few occasionally unimpressive animations. Gameplay is presented through a gorgeous hand-painted art style, mixing a 3D game world with wonderfully drawn 2D character portraits during conversations to bring life into the characters you’ll be sharing the ship with. All things considered, the visual presentation displayed here is impressive, but not without flaws. Character animations can, at times, look a tad unnatural or unpolished, likely an unfortunate and largely unavoidable result of indie studio Wispfire’s focus on story and substance over pure gameplay. Playing through the story provided remains enjoyable regardless, despite these small annoyances.

It’s important, when discussing the gameplay of Herald, to note that this is a point and click affair throughout. Within the first two chapters provided, no notable skill challenges were thrown at me as I played, no action-packed set pieces were displayed. This is a slow and deliberate affair, and I’m relieved to say that despite this, the game’s story never overstays its welcome. Acts are short and concise, lasting about 1-2 hours each, and replayability is very much a factor here. While Herald keeps a tight leash on the direction its overall plot takes, there are a plethora of choices along the way to shape the story however you desire. Devan can be shaped to your own image of who you think he should be, whether that means standing up for the weak, mouthing off or attempting to maintain some semblance of neutrality, you always have options. This is important within the scope of the world you are provided with, because without the freedom of choice and consequence, the plot would become quite claustrophobic, taking place almost entirely on the decks of the HLV Herald.

Visuals and gameplay aside, Herald’s key moments are consistently supplemented by a fitting soundtrack. Like the steward you play, the music remains in the background as you progress, serving to enhance the experience rather than overtake it. In action-oriented titles, bombastic scores or the use of licensed tracks can be justified, but here the more reserved approach taken by the score is greatly appreciated. 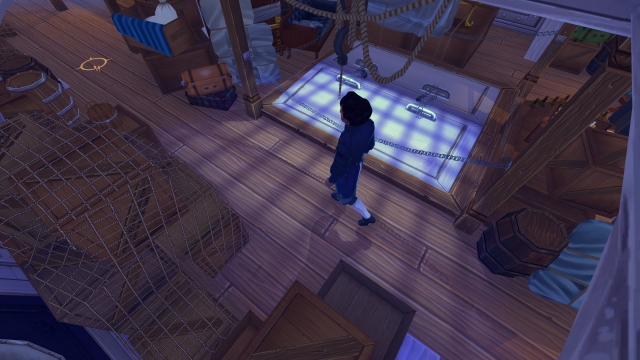 Presentation and story are strong suits of Herald, and despite a few minor drawbacks as far as animation is concerned, I was presented with a remarkably steady experience throughout. Pacing is managed well, and major technical qualms were almost entirely nonexistent. A steady framerate and absolutely zero major glitches or crashes, paired with the pacing mentioned above creates a tight, enjoyable run through the chapters provided by the talent at Wispfire, and has left me excited to continue this story when the remaining chapters are released.

Despite a few quirky animations, Herald provides an excellent story supplemented by a beautiful art style. This is a small scale point-and-click affair; if you're looking for a bite-sized drama, you've found your game.