Taking inspiration from surrealist RPGs like Earthbound and Undertale, Studio Sott succeeds at creating a short but sweet point and click adventure in Hotel Sowls. The creepy and bizarre atmosphere built in the game matches perfectly with the almost abstract art style and the unnerving nature of the story. Hotel Sowls welcomes you into its narrative as coldly as the receptionist welcomes you to your lodgings, it dumps you there and lets you make your own mistakes. Welcome to Hotel Sowls, a place you can’t stay too long but a place you shan’t forget.

Taking control of our main character, a somewhat amorphous blob man who is also somehow a pharmacologist, you arrive at Hotel Sowls with a mysterious and valuable stone. Upon a drunken night at the bar it appears the stone you came with has been stolen and it’s up to you to find the culprit. Along your journey you’ll encounter a distinct cast of characters and a series of small puzzles to drag you along. The set up of the story isn’t massively important; you’re a vague person-shaped being and something valuable goes missing. What’s more important is where the story goes. It would be a spoiler to say much more about the story but it is thoroughly engaging throughout.

Taking notes from The Shining but allowing the residents of Hotel Sowls to be wacky in a way only games can, the brilliance of Hotel Sowls is in the unique charm it exudes. From the talking tomatoes in the hotel lobby to the rubber duck and his rubber human on the roof, the game takes an almost Pratchett-like approach to writing its characters. There are many people to talk to within the hotel, all with their own personalities and quirks. While not many of them interact with the story in any meaningful way, they all are memorable and magnificently nonsensical. 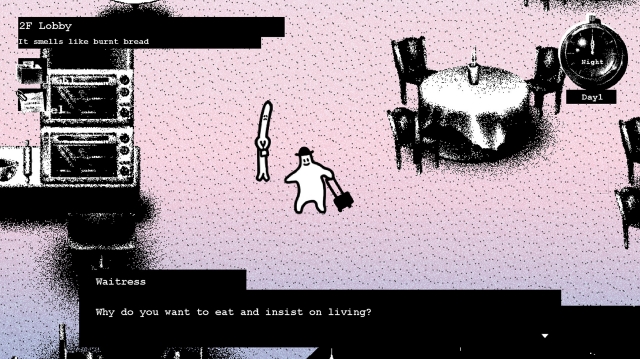 It plays as a very standard point and click adventure game: you move your character with the left stick and there is a separate cursor you can move with the right stick. There’s not very much more to say about the nature of the game itself. If you’ve ever played an old adventure game like The Secret Of Monkey Island then you’ll feel right at home here. If not there’s no need to worry as the game is simple enough for you to get to grips with almost immediately.

Most of the time you’ll spend in conversation with other characters, being delighted by the absolute idiocy coming out of their text boxes, but there are small puzzles to engage with too. In typical point and click style, most of these puzzles are logic based. You need to collect items and think a little bit about where you need to use that item or what to combine it with. It never gets too complicated apart from right at the end, where one of the good endings is locked behind a rather obtuse mixing puzzle. You shouldn’t struggle too much if you’re paying attention though.

I think the best thing about the game however is that you’re never locked into doing certain actions aside from the very opening set-up. You can leave at any time and engage with the staff and guests at the hotel as much as you like. The game doesn’t punish you for doing things your own way and uses that to inform its endings. It’s very nice that Hotel Sowls takes this much more open-ended approach to storytelling as a lot of point and click games of this style can get very bogged down in puzzles that don’t follow any logical path, or force you down a story path you don’t much want to get involved with. The game is also very stylish. Hotel Sowls would fit right at home on a Game Boy with its monochrome colour scheme but the almost Hotel Dusk-style sketched surroundings manage to imprint much more detail than is present in the almost featureless cast. The character design is interesting too, everyone looks a little bit like a cross between the DJ Marshmello and Mr Men. The game doesn’t fill the screen either, sometimes showing a patterned design underneath the gameplay in the background. It’s such a unique way of working around the minimalist design of the game but it looks really nice.

The audio is top notch too. There’s no voice acting in the game but there’s no real need for it. The music meets the atmosphere perfectly, it’s almost lofi chiptune at times and at others it’s wonderfully orchestrated. The audio plays with silence in great ways and there’s even one section with TV static filling the atmosphere. The sound design is just fantastic, mostly falling onto the great music but managing to build on that in many ways. Using Resident Evil style stabs to punctuate night and day changes, clear and vibrant footsteps and door sounds as well as some great water noises and many more.

It’s hard to say anything particularly bad about Hotel Sowls. It’s a wonderful experience with a fantastic story and many multiple endings that will keep you coming back to see more with some brilliant dialogue. If you’re in need of a short story in the style of those old adventure games, you would be hard pressed to find something better. My only real issue with Hotel Sowls is I’d like more of it.

Studio Sott has managed to create a short game filled with wonderful characters and atmosphere. This brilliantly realised story reminds me of The Shining but filled with Mr Men. While Hotel Sowls doesn’t innovate the basic point and click formula, it fills it with quality content and a surrealist vibe that really elevates itself. It’s just a bit short.