I’ve never been a huge fan of twin stick shooters,  I have only found a few I really enjoy, such as Geometry Wars and The Binding of Isaac. After playing Confused Pelican’s newest title, Iron Crypticle, I may have found another example of twin stick shooter gameplay done right. Admittedly, ‘shooter’ may be the wrong word since the player chucks melee weapons at the hordes of monsters between them and the treasures they seek. Whether playing through the normal Arcade mode or the more daunting Endless mode, there will always be more monsters to throw weapons at.

Since a large portion of the enemies don’t chase the player, ‘shooting’ at them feels better overall. This is because the player can shoot in any direction instead of just having to shoot at the horde behind them as they run circles around the whole area. This enemy design is reminiscent of Geometry Wars in that the enemies you need to defeat are more akin to obstacles than threats.

While there are enemies later on that will chase the player down, the most prominent has to be the Wraiths that can appear in any level. These little buggers show up if you spend too much time in a single room. More and more spawn, while the player has to decide if they’ll stick around or run off into the next area. This feels like a ‘quick and easy’ solution to stop players that like to take their time and methodically pick away at each enemy from a safe spot. I like it. 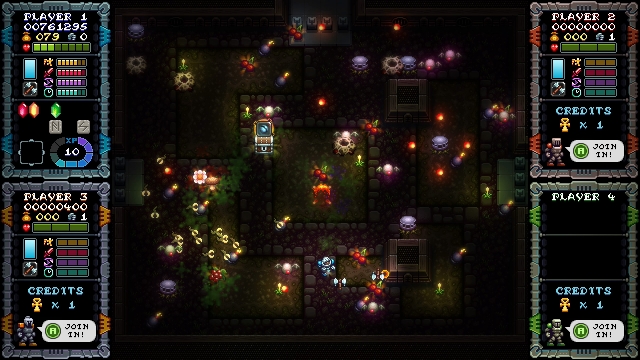 For me, these Wraiths only ever stop me from collecting the last few pieces of food or treasure that I left behind, which can be a little frustrating. They're are not the only (or even the main) gimmick this title has though. That honor would have to go to the fact that you can level up your character as you go further and further into a run. While the act of leveling up doesn’t net you any direct rewards, it does set your character up to receive more rewards in the future. The best way to describe this is to explain that you can upgrade individual stats such as attack and speed, and a level up allows the maximum cap on these stats to increase.

Upgrading things such as attack is always helpful, but still doesn’t hold a candle to the various power ups players can pick up. These power ups change how your character attacks and can help quickly clear an entire room if used carefully. If a player decides to go solo, these power ups are nearly necessary in order to get through levels before the wraiths show up; although the best way to play this title is with four players on the same console. The co-op in Iron Crypticle is wonderful mostly because of how the game handles lives when there’s more than one player. 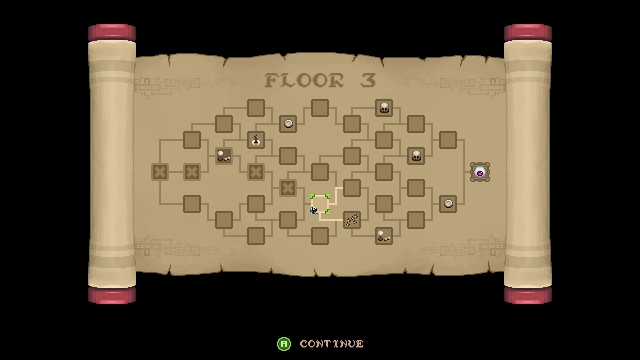 Once at least a second player is introduced, the players are given a pool of lives to share. With the addition of these lives, also comes the issue of sharing power ups and stat upgrades. Simply put, with more players, comes more firepower with the downside of weaker individual players. Since the levels are randomly generated, having a helping hand is still far better than having all the power ups to yourself. This goes double for the bosses, which take on a sort of The Binding of Isaac feel as they have the potential to destroy even a group of players in mere seconds if not dealt with carefully.

These bosses aren’t even the only truly dangerous aspects of the game either. There are several room types that offer an increased challenge in ways such as environmental hazards, special enemy types, or just a ton of a single enemy. Although these rooms can be avoided, due to players choosing which direction to leave each room, I often found myself drawn to them for the additional challenge. Often times, there are even other special rooms beyond these challenge rooms. The other special rooms mostly seem to be arcade rooms that can net the player some extra gold or shops where you can buy stat upgrades, health, lives, and even collectibles that give you bonus powers and points. 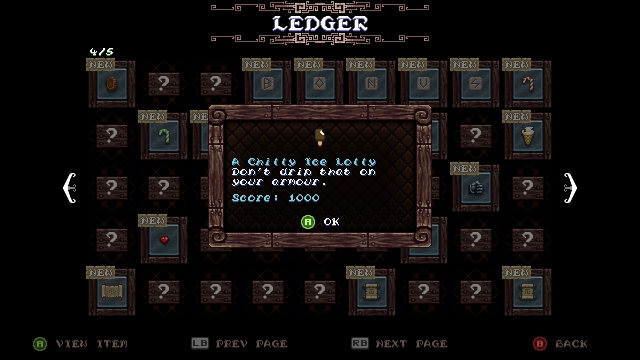 Collecting items like these makes each run a little different since they don’t always show up and can appear at the best or worst times. Also, I’m not entirely sure how, but it seems players can unlock various new weapons to pick up during future runs. Besides these new weapons, I only continued to start new runs to see what content I could unlock and levels I had not managed to reach yet. The problem with all of this is that games like this end up always feeling repetitive at some point.

Fortunately, Iron Crypticle manages to sidestep this issue for the most part by giving the player choices and unlockables to look forward to, matched with the unique boss encounters. Honestly, my biggest complaint about the game would have to be that I don’t feel like the leveling mechanic was made accessible enough from early levels. If there were more gradual steps that could be reached earlier, I’d be far happier with this interesting mechanic.

Iron Crypticle (Reviewed on Xbox One)

Iron Crypticle is arcade shoot ‘em up done right with decent twin stick gameplay that changes up often enough to keep the player engaged for many runs. With the addition of powerful bosses, impressive power ups, diverse enemies, and an interesting main concept, this title is quite a hidden gem.