As gamers, we've reached the stage where we know what to expect from the games we buy. Back in the dawn of gaming, it was new and fresh and each game had merit - for its flaws and its as well as its strengths. Nowadays, however, the unfortunate truth is that we have been bitten before. As such, the stigma that comes attached to a film-to-video-game game is unavoidable. All you can do is brace yourself, pop the disc in and hope for the best. 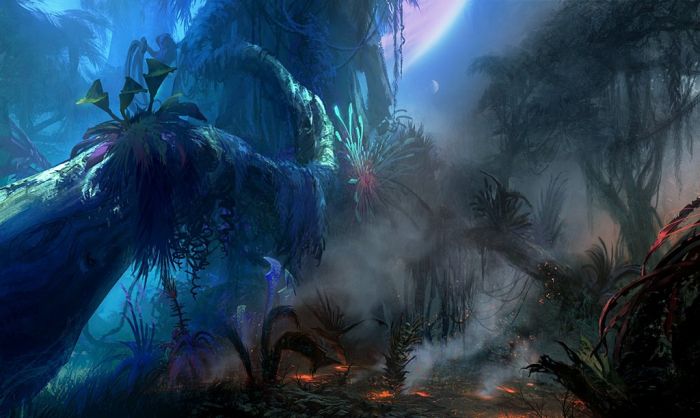 Rarely a game of this ilk manages to pull this off, however, despite how fitting a film may suit the transition to video game. Avatar, being based on James Cameron's blockbuster film seems ripe for such a conversion; glorious and unique vistas to explore, an emotive and interesting war to fight and an eclectic mix of items, weapons and creatures to pull from the pre-created history. The game is set two years before the film, so many would hope for an in-depth storytelling leading up to the film's beginnings. Unfortunately, it does not do this. As has become too common, this is just another film-to-game cash-in that will leave few happy with their purchase.

You begin the game as the character of your choosing, from a healthy selection of pre-created characters - each with a Human and a Na'vi form. You'll carry out some simple go-to-this-person and collect-this-number-of-things type of quests that are archetypal of this sort of game. It begins well enough, though the character interactions aren't brilliant and - for a game based on a highly CGI-focused cinematic experience - the graphics are sub-par. It's disappointing, since the opportunity to explore the glorious world as portrayed in the film is jarred by the poor graphics and even poorer animations. Of course, graphical and aesthetic flaws are the least important, but players will find it hard not to compare it to the film. After a short while playing the game you'll arrive at a decision that needs to be made - and the game's key selling point. You need to decide whether to side with the RDA (the humans) or the Na'vi (the blue guys). This decision affects which path your character will take and the missions and places you go. This type of game concept is an enjoyable one, since it gives you reason to replay - to find the subtle differences between the two. Unfortunately, however, the game isn't really good enough to warrant a second playthrough and the two paths are so similar it wouldn't really make much difference. Your ultimate goal is to find and locate the Well of Souls by finding songs in the willow trees (yes, you did read that correctly). Regardless of the path you chose, this will be your main objective - only who you speak to and who you fight changes. As a Na'vi the world of Pandora, or Eywa, is kind to them and most beasts and carnivorous plants will leave your player alone, and attack any nearby RDA. As a Human, you'll be able to commandeer a number of vehicles, each with their own destructive capabilities. Whoever you choose, however, will play exactly the same. While the Na'vi focus more on natural weapons such as bows, blades and the like and the RDA focus on a plethora of machine weaponry, the abilities either race uses are exactly the same. Sure, the names are changed, but they all function in the same way. You have the healing ability, the stealth ability, the sprint ability and so on. Whatever ability you have as one race, you'd have as the other - just under a conveniently renamed title. 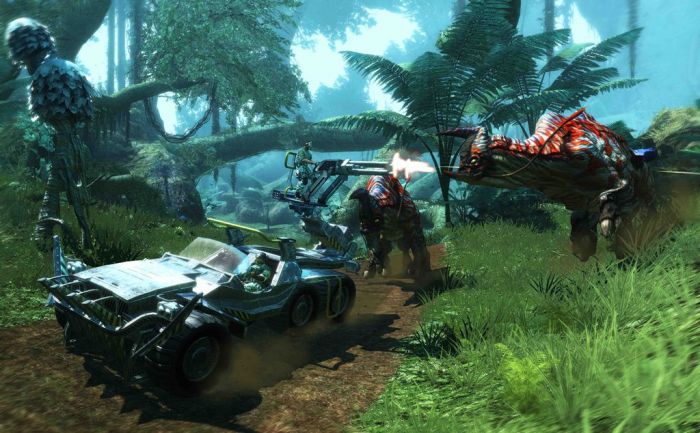 In the end, how you use the abilities is important and - as you have probably come to expect - it fails to impress. The animation is terrible, the damage detection is erratic and the AI is even worse. There's no sense of gravitas to your characters - no feeling of actually controlling one of the large, agile warriors as you chase down your prey. If you decide to ally with the Na'vi, nothing feels different as though you're anything other than the same guy in a blue body. Okay, I know that's the point of an Avatar but being put in control of one should control or feel different. As the missions progress through brief conversations as your commanded where to go and what to do, the overwhelming sense of repetition is hard to resist. You'll wade in, kill the bad guys, collect what you need to collect and return to the next person to do the same.

It'd be nice to be able to explore a little too, and the game does give you that option. It begins positive enough, with each (relatively large and distinct) area providing you with a number of side-objectives, such as destroy a certain number of objects, kill a certain number of enemies or collect a certain number of objects - as well as the all important ‘clear 100% of the fog'. Those that are so inclined would expect to have a field day, keeping their eye out for all their required objectives and searching high and low to unlock all the fog. However, this falls flat when each area has you unlock all the fog anyway when the missions send you through every corner of the map. 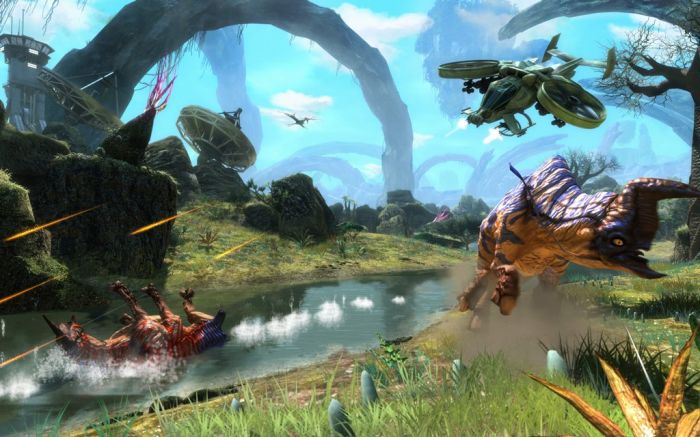 Throughout the game there are objects that allow you to teleport from location to location where, when selecting these, you can choose to take part in the conquest mini-game. In this mode you use acquired experience points to purchase units and try to take over the planet for your chosen side. A globe is displayed, with each of the areas divided up into provinces. Your team begins with one province, which can't be taken, where you build your troops and expand our trying to, as the name suggests, conquer the rest of the planet. You can build defences or more troops, and transport troops through your provinces until you decide to attack. After you take a turn, your enemy takes a turn - it's like a big, digital game of Risk. I love Risk. This praise, however, is short-lived - saving your money and simply building the most powerful units (or which there are three types) means you'll be able to waste any of your enemies, so much so that provided you build enough of these (and enough troops to ‘defend' your acquired provinces) and you'll have no problems completing this.

Ultimately, Cameron's Avatar is a game that could've been much more. It could've had better graphics and weightier controls. It could've had a more intriguing plot choice and better missions. It's clearly a rushed game, thrown out to tie it in with the release of the film that - with a bit of time, care and attention - could've been far more entertaining than the this poor attempt.

Ultimately, Cameron's Avatar is a game that could've been much more. It could've had better graphics and weightier controls. It could've had a more intriguing plot choice and better missions. It's clearly a rushed game, thrown out to tie it in with the release of the film that - with a bit of time, care and attention - could've been far more entertaining than the this poor attempt.