Kevin Smith is quite well known for having bizarre and convoluted plots. His View Askewniverse films have travelled across the breadths and depths of the world and beyond, and central to most of these films is the characters that he’s arguably most famous for: Jay and Silent Bob. It’s fitting, then, that this game has an equally convoluted existence. It could be argued that it wasn’t even meant to be here today if we are honest, as this is a spin-off title for another game that doesn’t yet exist. 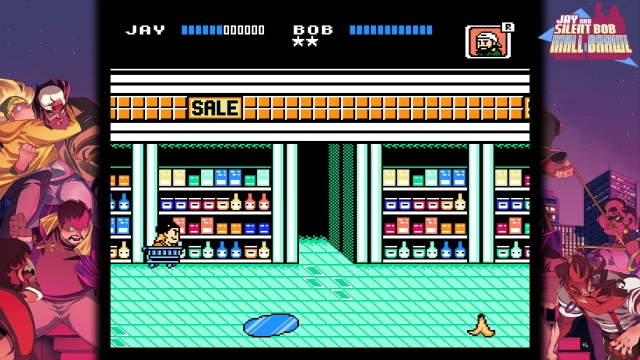 Initially, Jay and Silent Bob: Mall Brawl was meant to be a backer gift for backers of Interabang Entertainment’s Jay and Silent Bob: Chronic Blunt Punch, which was a multiplayer brawler in the style of games like Castle Crashers. Despite receiving full funding in 2016 though, that game still isn’t ready yet, so this spin-off has been released early. I say “early”, you could also argue that it’s a little late as this is a NES title which runs via emulation, although Limited Run is creating a cartridge version that will be available later this year. Either way, this is a title created for a console that was discontinued 25 years ago, as a way of keeping players occupied while they wait for a game designed for modern hardware. Confused? Yes, me too.

Regardless of the rather unusual reason for the existence of the game, it does indeed exist and it’s out now on Steam and Switch. The gameplay is very similar to scrolling fighters of the NES era such as River City Raid and Double Dragon. With scenes representing various scenes from Jay and Silent Bob canon, this is a love letter to both the beat-em-ups of old and the View Askewniverse alike, there’s an unashamed retro feel to Jay and Silent Bob: Mall Brawl. It doesn’t deviate from the established formula, and really feels like you could be playing an undiscovered gem from back in the day. Of course, with the title characters’ cinematic debuts coming less than a year from the release of the last official games for the NES, it’s fairly obvious that this isn’t the case. 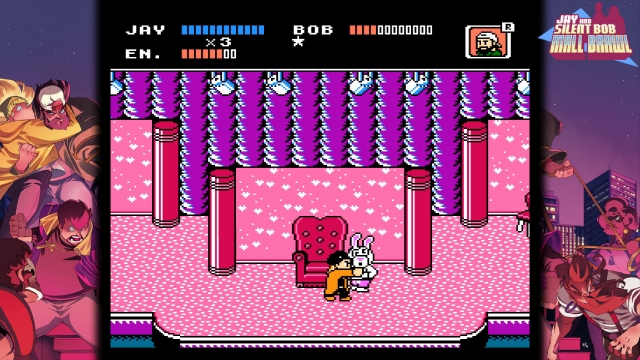 The controls are limited to moving, jumping and a single button each for kicking and punching, so you’d expect there to be very little variety in how enemies are taken on, but actually, they’re pretty well utilised, with different enemies responding differently to combinations of attacks. There are grappling moves as well but these are a little difficult to pull off consistently, which is a shame as they are quite effective when they work properly. Enemy hitboxes are occasionally inconsistent too. These issues don’t crop up too often to be a major problem, but they have a habit of being somewhat on the frustrating side when they do.

You can switch between the two characters throughout, with this serving as a kind of life system. When one character dies, the other is tagged in their place, but after a short while, the dead character will become available for selection again. This way, you can keep going indefinitely, as long as you don’t lose both Jay and Bob in quick succession. That happens more often than you might think however, as this is still a very unforgiving game. Get out of rhythm and you’ll find your health depleted quicker than you can say bickety bam. 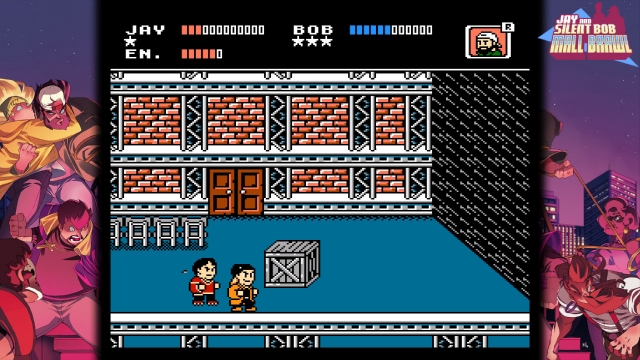 The variety of enemies is worth commending, with most of the notable characters from the many films that have starred Mews and Smith’s characters popping up, including that giant rabbit from Mallrats, a “Mooby” mascot, and the infamous “poop demon” from Dogma, who makes an appearance as a boss. If you haven’t seen the films then you won’t get the references, but it doesn’t fundamentally affect the gameplay if you don’t so it’s not a major issue.

The main challenge throughout this game is one of memory more than anything else. Remembering the attack patterns of enemies of the locations from which they come in will be what gets you through the levels. This applies especially to the somewhat controversial “shopping cart” level, which sees you avoiding obstacles as you speed uncontrollably through the mall in a trolley. Personally, I loved this level, but it’s been something of a sticking point for a few reviews. It is indeed quite hard, but then so is most of the game. The infinite continues allows you to keep practicing each level until you’ve memorised the patterns so I didn’t feel too aggrieved with it. This isn’t the game that Jay and Silent Bob fans have been waiting for, that’s coming at some point in the as-yet-undetermined future, but this is still an excellent diversion to keep us entertained until that long-awaited current-gen title arrives. It’s a little on the pricey side for an 8-bit beat-em-up, retailing at about twice the price of the Arcade Archives series, and only a few quid less than Capcom’s beat-em-up bundle that contains multiple titles from the era, but if you love an old-school scrolling fighter, then this may well be right up your street (of rage).

A really nice stop gap title until Chronic Blunt Punch arrives and decent use of an old system. A few fiddly controls, but nothing that can't be forgiven.