I was a huge fan of the original Kill la Kill anime from Studio TRIGGER back in 2013 for a multitude of reasons. The animation style was fantastic, the music was so great and memorable, and the amount of pure hype it brought to each episode was something that had me counting the days until the next one, despite the excessive overly sexual nature of it. So when I heard they were making a game based on the anime I had a few thoughts: 1) it’s a little late as it’s been six years since the anime released, 2) the animation and graphics have to be great and true to the anime, and 3) it needs to bring that hype that I loved so much. Luckily it has an answer for all three concerns and they are all good answers.

Kill la Kill The Game: IF (Kill la Kill IF) is an arena fighting game similar to the style of the Naruto Ultimate Ninja series or the more recent Jump Force. It’s developed by A+ Games with a collaboration with Studio TRIGGER and under the supervision of the original writer of the anime – Kazuki Nakashima – and it definitely shows. The story for Kill la Kill IF is essentially what the title suggests, a “what if” scenario that still surprisingly ties itself to the original anime. Instead of playing the protagonist from the anime – Ryoku Matoi – you play her antagonist – Satsuki Kiryuin – in an all-new “what if” story from her perspective. Without going into spoilers, fans of the anime will recognize the beginning moments of this alternate story as it starts out with some memorable scenes at Honnouji Academy (a key location). Things quickly change as a character appears much sooner than previously known which begins to change the story dramatically in awesome and interesting ways that fans will appreciate. If you’re not a fan or haven’t seen the anime, I would definitely do so before playing this game because there is important information you need to know that this game kind of glosses over in the beginning. 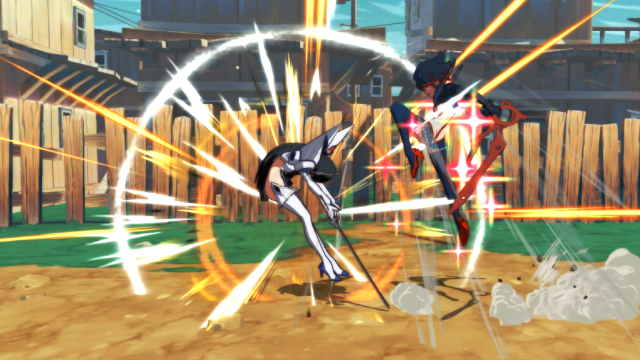 The story is actually split into two parts. The first one you play as Satsuki since it is technically her story and after beating that you unlock Ryoku’s story which is essentially the same IF story, but from her perspective. Each story has 10 chapters that take about four hours each to complete with some chapters having no gameplay and just cutscenes. You get a letter rank on each chapter that has a battle based on time, health and how offensive you were, so there is some replayability. While both stories are good, I preferred Ryoku’s story over Satsuki, but that’s mainly because it brought the hype I was looking for and it had more back story for this alternate storyline.

Speaking of bringing the hype, the combat in Kill la Kill IF does just that. When starting out, the combat can feel slow and I was initially underwhelmed, but once you get the hang of the controls and start learning and combining your move-set together to create some awesome combos, it can nail that feeling that fans would expect from a game based on this anime.

For the face buttons, you have a basic attack, a long-range attack, a jump button that also dashes to the opponent once double-tapped, and a guard break. These buttons alone have a bunch of variety in terms of combos because depending on air or ground the combo can change along with the direction of the left thumbstick having the ability to alter your basic attacks. There is a gauge under your health as well that can be used for special attacks by holding the left trigger and using a basic, long-range or guard break attack as well as the ability to stop an opponent’s combo by pressing both triggers once there are two bars filled. These special attacks are essentially iconic moves that these characters used in the anime and it brings that hype with awesome animations and dialogue. You can fill your gauge bar completely and activate Blood Valor which is a rock-paper-scissor like action sequence where you can regain health, some gauge meter or increase the damage for each sequence with some great dialogue amongst characters in between. If you win this action sequence three times in a row you will essentially go ‘super saiyan’ and are able to use your ultimate that will immediately end the match even on the first round if the opponent is hit by it (if you lose or tie it ends). These ultimate moves are the iconic moves that these characters used in the anime for their most hyped up moments, so needless to say, they are fantastic, plus, winning three in a row is harder than it sounds.

There is a slight issue with the camera when in combat since sometimes when you're getting your ass kicked it tends to shift the focus to the person that’s kicking your ass, putting them front and centre. You can lose track of where you are because of this especially in battles that have more than one person in the story, but it doesn’t happen often so it’s not a huge concern.

Kill la Kill IF has only eight playable characters, but they each feel unique in their own way with only Satsuki and Ryoku feeling semi-similar to each other. The characters who are larger feel heavier and the smaller ones feel more agile. Some characters even have their own quirks such as Ira Gamagoori having to charge up a separate percentage bar to be able to attack or Houka Inumata having the ability to go invisible if he hits a certain amount of long-range attacks. It’s an impressive addition that really differentiates the characters despite there being so little of them. These characters also have unique dialogue depending on who they are facing for the intro, the Blood Valor mode and the ending, which is something we’ve seen in Injustice 2 and Mortal Kombat 11 and I’m very glad it made it here as well. 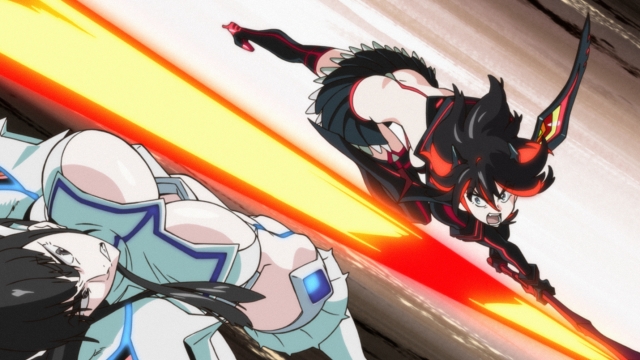 Kill la Kill IF has multiple modes to play around with including a well-designed training mode, survival modes and free battle where you can play against CPU players or human. With the power of the Nintendo Switch, you can also play local co-op with each player having a Joy-Con. There is also a gallery where you can view cutscenes from the story and look at the character models while also being able to purchase poses for them with the coin you earn from playing the game, I don’t know why, but it’s there. There are online modes as well such as normal player matches and a ranked mode, but since this is a pre-release review, I was unable to try them.

The final thing Kill la Kill IF had to nail to feel authentic is the music, graphics and especially the animation style and I’m happy to say, it nailed them all, probably the most out of everything. I can’t believe how good these graphics look on the Nintendo Switch, how well it runs, and how true they are to the original anime especially for the combat animations. You can really see how Studio TRIGGER helped capture that style they nailed in their original series. As mentioned previously, there are some chapters that are only cutscenes and during those, I got lost in the high quality of these cutscenes and there were points where I thought I was just watching an anime and got surprised whenever it would switch to gameplay. The music from the anime also returns with characters theme songs playing perfectly with the cutscenes as well as in battle, which also helped with the authenticity. Kill la Kill The Game: IF is a great arena fighting game based on the popular anime by Studio TRIGGER. With TRIGGER’s involvement for the design and Kazuki Nakashima’s involvement for the story, they managed to help deliver the style, music and hype that fans of the anime – such as myself – loved while creating an all-new “what if” story that may have fans returning to the anime it’s based off (I know I will be). It’s rare we get an anime game so true to the source material, but A+ Games nailed it on almost all fronts.