Kingdom Hearts: Melody of Memory is yet another (canon, cannot stress that enough) game in the Kingdom Hearts franchise and the first one post the Dark Seeker saga. From action RPG to a rhythm game that can only remind me of the Persona dancing games, I can safely say that it is...skippable but still a very enjoyable game for all.

The story takes place after Kingdom Hearts III and it’s Re:Mind DLC. Sora has disappeared after saving his close friend Kairi and all his friends have begun looking for him. Kairi decides to put herself into a deep sleep for a year in order to find the clues to Sora’s location in her heart.

And that’s all the story you’re getting.

Seriously. Most of the game is a recap of all the previous games (except Kingdom Hearts Unchained X (chi) and Dark Road as they are still ongoing as of writing) and the new plot points are relegated to the end of the story mode. This would be fine if they didn’t release about a dozen remasters of the previous games and even bundle them into an All-in-One package for PlayStation 4 and Xbox One and not the Switch because that’s where I played this. If you’re a new fan who wants to dive in, while cheaper, you’re better off playing all the other games since the recap skips some details about the story. If all else, you’re better off watching the ending cutscenes on YouTube and it won’t hurt your experience if you’re a longtime fan. 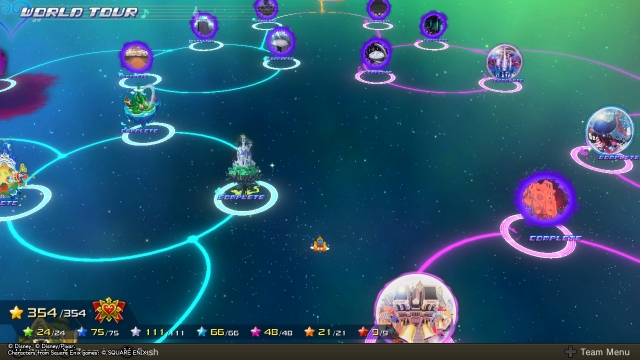 However, most people would buy a game like this for its music rather than its story - which is obvious in hindsight since Kingdom Hearts has amazing music. It includes such classics as “Vector of the Heavens”, “One Winged Angel”, “The Other Promise” and “Rage Awakened”. It also includes some Disney songs like “A Whole New World” from Aladdin and (probably by contract/gunpoint) “Let It Go” from Frozen. Boasting 140 songs, it’s more than enough content from all the games...but they use the original songs instead of the rearranged versions from the Final Mix versions. If you played any of them first and played the version they include in Melody of Memory, you can hear that the instruments aren’t real and generally the songs don’t sound as nice. Also, some songs either need to be unlocked by playing a lot, through the Story mode, or need to be crafted.

That’s right, you need to grind in a rhythm game. I cannot tell you how long it took me to unlock Roxas’ Theme. I pray for the completionists because you’re going to have to do a lot more than perfect every song.

Also, it doesn’t include some songs like “Face My Fears”, the songs from the Pirates of the Carribean world and you can’t even play “Dearly Beloved”. I was genuinely annoyed because Melody of Memory’s swing version is one of the most enjoyable versions of the song I’ve heard. 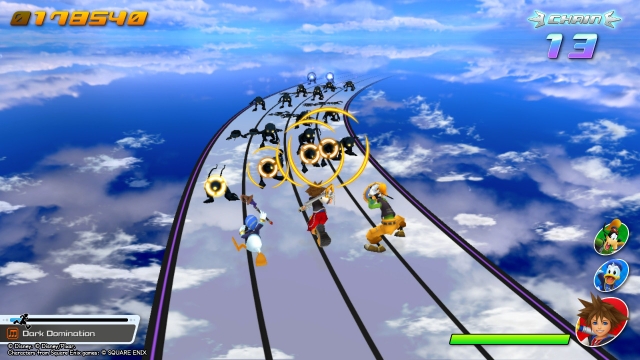 The gameplay, despite shifting to the rhythm genre, is actually quite similar to the previous games mostly due to its controls. You control Sora/Roxas/Aqua/Riku and friends like the main entries. Attack is Cross/A, Jump and Glide is Circle/B, and Special Attack is Triangle/X. Wrapping your head around the control scheme is a lot easier if you have played the previous games; you just have to do it in a rhythm. Bumpers are another button for Attack, which is useful for Double and Triple notes. Melody of Memory has a variety of difficulty options allowing you to play to your skill level. Have a hard time using multiple buttons? Play using One Button style, which simplifies the controls to one button. You think “Dark Dominion” is too easy on Proud? Play with Performer style, which adds additional button prompts to songs. The game also allows a bot to play the song perfectly so you can see what you need to do. There are also items you can obtain that makes songs easier to complete, like Potions and Mickey. This is a rhythm game that I found really accessible as long as you have some sense of rhythm. However, notes are represented by enemies. Heartless, Nobodies, Unversed and Dream Eaters. On Proud, they fill the screen and sometimes find it difficult to see which button I have to hit. Although there are markers that help, it gets overwhelming to see, process what I need to press and then act on it. Although, that may just be me. However, Memory Dives looks and plays more like a traditional rhythm game, playing a FMV in the background while you play.

The online multiplayer is actually quite good with some caveats. I haven’t experienced any sort of lag or disconnections whenever I play it, however you will rarely have any match that isn’t on Proud Mode with Tricks off. Tricks are like items in Mario Kart and used to mess with your opponent in some way, built up by simply playing well. It annoys me more than makes the songs more interesting to play because there are some combinations that completely screw you over. Like making the entire track invisible for some time and needing to play from memory. And the version where you play against a bot always has tricks on. It’s not great to say the least. Now, multiplayer is just like the singleplayer, except you’re competing for a higher score. The difference between an Excellent and a Rainbow Excellent becomes much more apparent in this mode so be sure to get a lot of practice in before heading into it. Unfortunately, I couldn’t test out co-op and the Switch exclusive 8-player Free-For-All mode properly, I can tell it can be fun modes to play with friends and family. 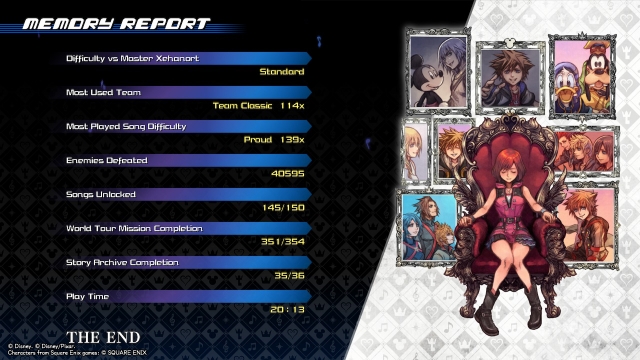 Kingdom Hearts: Melody of Memory is a great rhythm game that is sure to be enjoyed by newcomers and veteran players of the genre. However, if you’re buying it for the story you should probably skip this. This isn’t the Kairi game fans have been pining for since the Re:Mind DLC. 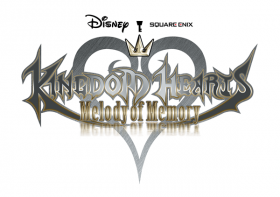