The original Left 4 Dead proved to be one of the most popular and original multiplayer games of 2008, so it was something of a surprise when its sequel's announcement was met with a barrier of scepticism and concern from members of the community. Most of the cynicism stemmed from a perceived lack of variation, new content, little support for the original and, perhaps worst of all, the inclusion of banjo music. So, does Left 4 Dead 2 manage to shake off these worries and prove to be one of this year's must play titles? 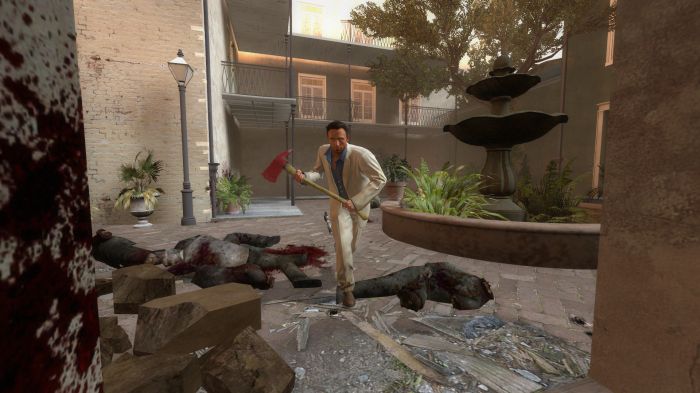 Perhaps the most obvious differences between Left 4 Dead 2 and its predecessor is the setting. The sequel takes place in the Southern United States which immediately gives it a different and very unique flavour. Largely gone are the original's constantly dark and gritty environments, instead they are replaced by a wide range of different locales and settings. During the course of the game you'll fight your way through a Dawn of the Dead inspired shopping mall, fight off hordes of infected in muddy swamps and face some adrenaline-pumping finale sequences. Many of the campaigns feature daylight elements, which create a strange sense of familiarity and heighten the game's intense atmosphere as you see normal streets populated by swarms of bloody creatures. 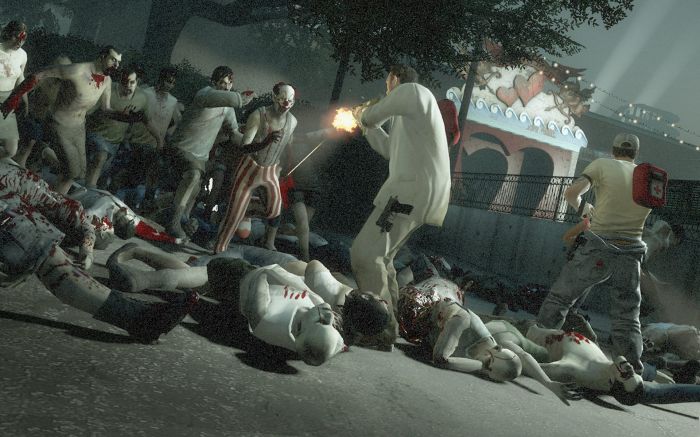 To go alongside these radically different locations, Left 4 Dead 2 introduces a new motley crew of survivors. It was always going to be difficult to create a group who had the charisma and character of the previous survivors and this fresh bunch can't quite compete. They are all warm and likeable and their writing and voice acting is constantly superb, Elis and Coach especially; however the remaining two, Rochelle and Nick seem a tad bland by their counterpart's standard. As the game progresses though, there does become an attachment which becomes evident partly due to the inclusion of a more regimented story. In the previous title, the campaigns were nothing more than a series of "films": you picked one, played it and moved on. Here the campaigns are woven together into a story, with each finale leading into the next. This was a great move and gives you a greater sense of progression and achievement and a sense that the overarching story is being advanced. 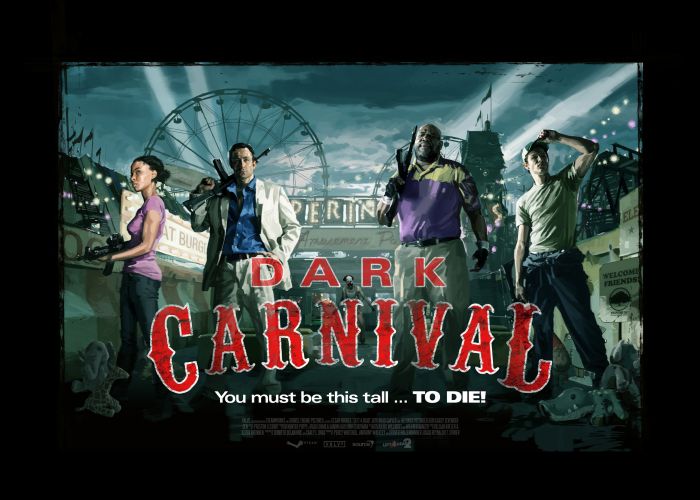 Visually, the game has received a significant overhaul which is a testament to the variability of the Source engine. While Left 4 Dead 2's graphics can't quite compete with some of the latest high-end next generation graphics, they can still impress. Both day and night look fantastic with some excellent lighting effects and even the filthy swamp water has a certain charm to it. Most noticeable are the new animations of the infected who have found more ways to claw and climb after you. However, you can now send them to thier grave in ever more gruesome ways thanks to a new dismemberments engine which usually sends limbs and bodily organs flying.

Thankfully, the fresh gameplay additions can match up to the visual overhaul. The greater variety in the weapons has a dramatic increase on gameplay and most display distinct advantages and disadvantages. Not only do you have to make the choice between shotgun or rifle, now you have to decide which sub-type you want. After Left 4 Dead 2, the original's paltry selection of weapons seems shameful. The melee weapons are a bit of a mixed bag with many feeling interchangeable. There can be no denying the worrying pleasure of gorily mutilating waves of the infected with the new chainsaw, but the only real differences between the rest of the weapons are cosmetic. On the harder difficulties carrying a melee weapon instead of extra pistols is tantamount to suicide, as the extra firepower is a godsend against the special infected.

All of Left 4 Dead's baddies return and are as dangerous as ever. The Hunter, Smoker and Tank are all back with a little cosmetic overhaul and can kill you faster than a moving train should the situation permit. The Boomer now comes in male and female varieties so you can be disgusted in a slightly new manner when you see a bloated, sore-ridden body suddenly vomit on you from behind a corner. The Witch is now more dangerous than ever as she can wander during the day, which leads to some horrifying situations when you realise she is coming right for you. 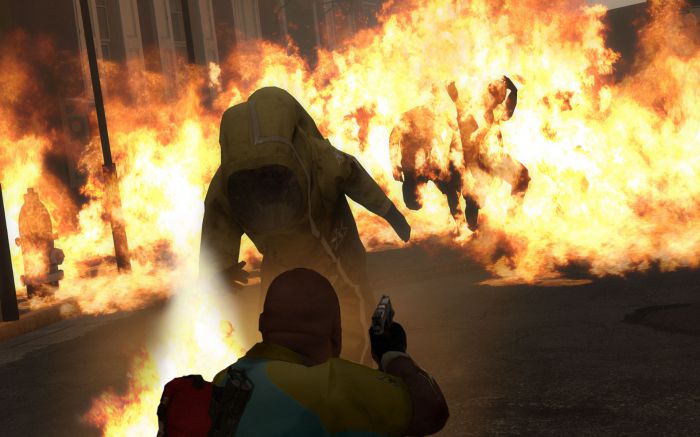 Left 4 Dead 2 introduces three new specials to give you trouble and they are all cleverly designed to work with the others and make life hell. The Jockey, a cross between The Hunter and a headcrab can grapple a survivor and control the survivor's movements. This can lead to horrible situations where you are moved directly into a witch or thrown out of a hotel's window on the top floor. The Spitter has the ability to cough up patches of acid and aim them over long distances, which is ideal for either pinning the survivors or splitting them up to allow other infected to make their move. Lastly, the Charger can slam into survivors knocking some over before grabbing one to pummel into the ground. The "Uncommon common" infected also appear and are restricted to certain campaigns. These specially designed, themed opponents require a little more thinking to dispatch than your average enemy and are a great addition. 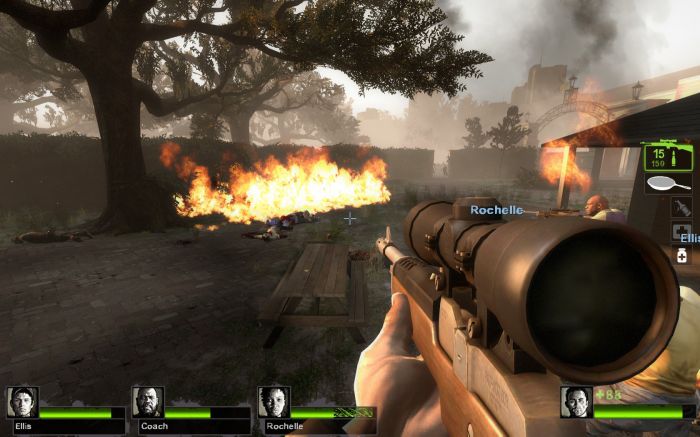 These new creatures help to show off the improved director AI which is at times, truly terrifying. The infected now really seem to work as a team, manipulating you into situations you would definitely rather not be in. However, at times there are some issues with both your teammates and some of your opponents. The Charger has a tendency to not really do anything, often wandering around to get shot or charging in at bad times or picking isolated survivors. There seems a lot of potential for the creature but at the moment, the AI seems not to understand how to utilise it. Similarly, your AI teammates still decide not to help you when pinned by a special infected despite being stood next to you, which remains incredibly frustrating.

However, despite these slight issues Left 4 Dead 2 rarely has you anything less than gripped. The level design is outstanding and each campaign is far more varied and diverse, making the original seem linear and predictable. Each finale is now radically different and there are several new formats which help to keep things tense. The new weather system which is heavily implemented in the Hard Rain campaign changes the atmosphere entirely and creates the first scary moments in a Left 4 Dead title. Slowly advancing through a field in rain so thick you can barely see, while Witches surround you was almost pant filling, especially when out of nowhere a horrible scream sounds and one of your team suddenly dies. 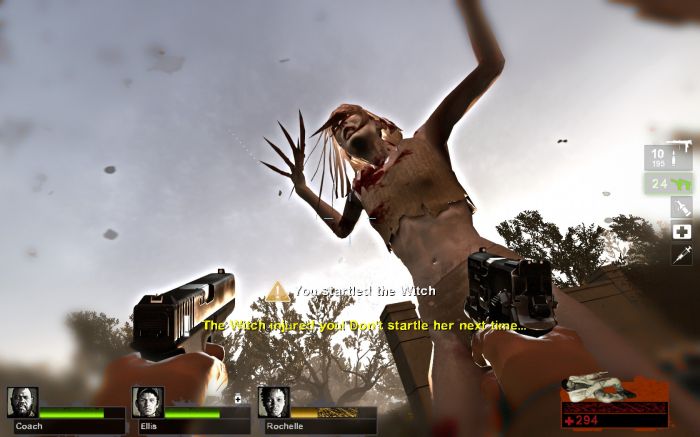 The levels themselves are also different, following different templates and formulae. While still fundamentally being "Go from X to Y" levels, the route they take to get there changes nicely and with some levels altering slightly to create different paths there is certainly a degree of replayability added.

The competitive multiplayer element returns, which only creates a more intense and difficult experience. With humans controlling the special infected, they are even more deadly and "the versus" side of Left 4 Dead 2 offers both competitive and cooperative elements. A new mode, "Scavenge" has teams of survivors attempting to fuel a generator by collecting gas cans, while other players stop them. It's a very different experience that's perfect for a quick competitive game, rather than the more drawn out Versus mode. The teams can be a tad one-sided in these game modes, but generally they work well and offer more variation. 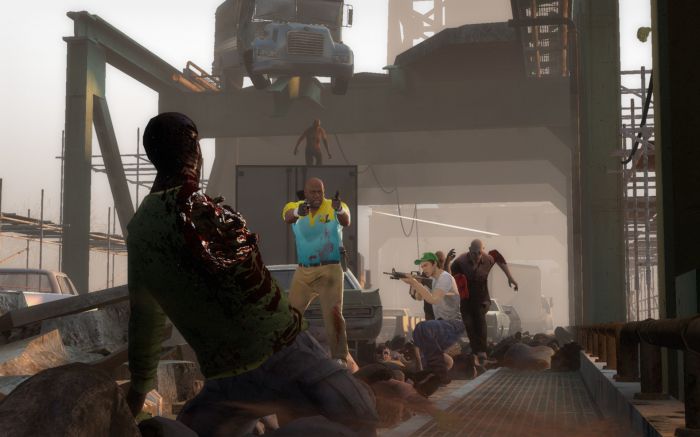 The final new inclusion of Left 4 Dead 2 is Realism mode, which removes teammate's silhouettes, allows the enemies to take more damage and for there to be generally less guidance. The mode seems like a bit of an afterthought, but offers a way to play the game with friends, although voice-communication is generally a must. Its separate inclusion as an alternative game mode seems a little excessive when it could just as easily be a check box in a standard campaign lobby, but it will offer more to the skilled team players out there.

Yet, Left 4 Dead 2 has several issues which slightly mar the game experience. Many of the new additions have little effect, such as the new ammunition types. These boxes of ammo have to be picked up in place of a health pack and then deployed for your team. This means if you already have a health pack, you have to pick up the ammo, drop the health kit, deploy the bullets then pick the health kit back up. This feels unnecessary and simply wastes time. The bullets are never really that useful, except on the harder difficulties, and a lot of the time it causes more problems co-ordinating the dropping than simply moving quickly ahead. The new Boomer Bile bomb is largely pointless and summons a horde of infected to attack whatever is struck. However, they generally take so long arriving that whatever you hit is already dead, leaving you with a horde to deal with. 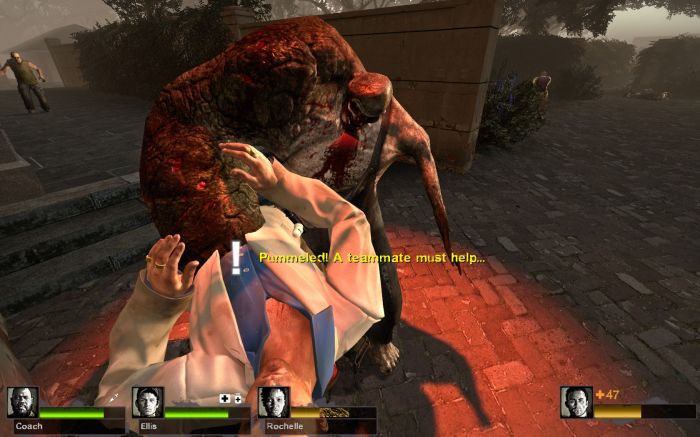 The biggest issue with Left 4 Dead 2 is whether it should have been an expansion pack for the original rather than a stand-alone title. While this criticism certainly has its strengths, the variability, 5 new campaigns and a solid new multiplayer mode definitely outweigh the negatives. If you've never experienced the series, then this sequel provides excellent gameplay with great new additions. If you own the original, then you may be left a little disappointed with a largely similar gameplay experience. But that experience is tailor-made cooperative action in thoughtfully constructed locations with a great deal of replay value. However, it should be noted that Left 4 Dead 2 contains banjo music and if you're so cynical that that criticism seems legitimate, then it won't be for you.

The biggest issue with Left 4 Dead 2 is whether it should have been an expansion pack for the original rather than a stand-alone title. While this criticism certainly has its strengths, the variability, 5 new campaigns and a solid new multiplayer mode definitely outweigh the negatives. If you've never experienced the series, then this sequel provides excellent gameplay with great new additions. If you own the original, then you may be left a little disappointed with a largely similar gameplay experience. But that experience is tailor-made cooperative action in thoughtfully constructed locations with a great deal of replay value. However, it should be noted that Left 4 Dead 2 contains banjo music and if you're so cynical that that criticism seems legitimate, then it won't be for you.

Left 4 Dead 2 is Free for Today Only!