Left 4 Dead makes one thing very clear: Valve know what people want. An online cooperative game in which you and three friends fight off legions of infected humans could quite possibly be one of the best combinations: ever. When you consider the fact that the game has been fine tuned and expertly crafted by a company who knows their genres inside out, this is easily one of the games of year. 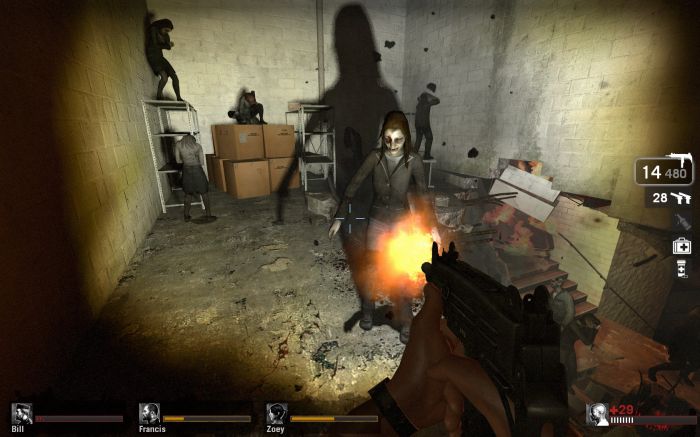 The game's premise is simple and places you straight into the action. You play as a survivor who has managed to survive the initial outbreak of a mysterious virus alongside three other survivors. This strange outbreak has transformed most normal people into insane and aggressive enemies who attack en masse and will do everything they can to stop you staying alive. Your goal is simply to escape, using whatever means possible with four different scenarios to test your abilities.

Working together with three others (or the computer controlled AI in single player) you battle your way through the hordes to "safe rooms", which act as checkpoints between the levels. The gameplay is well refined first-person shooting which requires skill and precision due to the game's friendly fire settings, which ensure that teamwork is required. Weapons are limited with a restricted selection available which gradually gets upgraded as you progress through the scenario. The weapons are relatively different; however the three later firearms are simply upgraded versions of the Uzi and Shotgun: the game's default weapons. Whilst the rifle offers a new dimension you still yearn for some more creative ways to dispatch the hordes of zombies. Thankfully a pipe bomb (with added siren to attract the infected), the good old Molotov Cocktail, petrol cans, gas tanks and even oxygen cylinders can be used to fend off your attackers.

This brings us to the horde itself, who are the real stars of the game. They are brilliantly designed reflecting their previous lives before becoming the blood stained dead-eyed zombies you face. Military troops sent in to try and control the situation, airport runway workers and office workers now try and mercilessly batter you to death and must be fought off with any means necessary. They will smash through windows, batter down doors, climb up objects and reach their arms towards you through gaps and the sensation is intimidating to say the least. 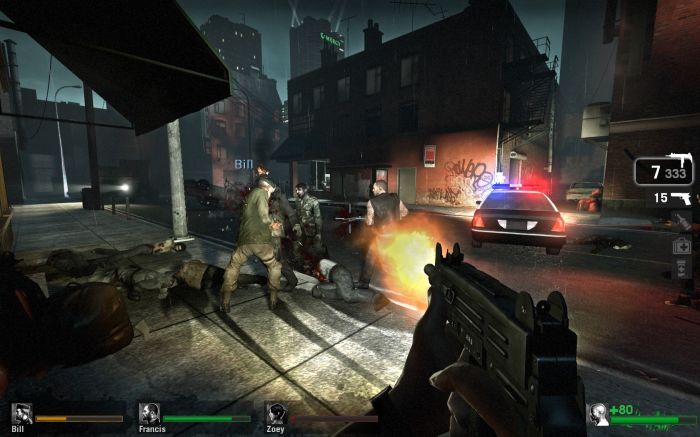 Whilst the horde forms the bulk of your enemies and is fairly easily dealt with by an organised team, the special "boss" infected are where things get scary. These more advanced opponents can destroy a team easily and must be dispatched as soon as possible. The Boomer is a bloated, sore-covered abomination which spews bile over the survivors alerting the horde to your present and attracting them to you. The Smoker can snare victims with its enormous tongue and drag them into trouble. The Hunter is a fast and agile attacker who pounces on top of its victim before tearing at their body.

These enemies are an excellent addition and require some careful thought and tactics to eliminate, especially as you are normally besieged by the standard enemies at the same time. However, there are another two foes that are much more dangerous. The Tank is a huge hulking infected which can soak up ridiculous amounts of fire and can easily kill an entire team, especially on the hardest settings. Careful teamwork is necessary to defeat the beast usually alongside a petrol bomb or two. The Witch is the last of the special infected and resembles a frail young woman who sits crying. If she is disturbed she will tear into the team at high speed with razor sharp claws. Needless to say she it is best to sneak past her if possible. 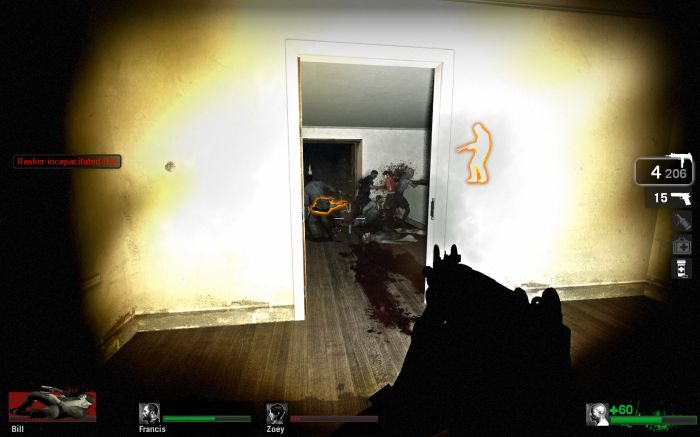 The game itself looks and sounds excellent and really carries the feeling of an epic apocalypse horror theme. There are plenty of filmic effects on show such as a slightly grainy feel to the camera and not to subtle indicators such as spotlights at moments of fear. The sound is generally good, with audio cues of music being used instead of on screen hints which is a nice touch. The character voice acting is also great with plenty of variety and little repetition despite numerous plays through the same scenario.

The gameplay itself is satisfying and enjoyable and the excellent Versus mode is a brilliant edition. Replacing the boss infected with human characters and turning it competitive ups the stakes and makes the game challenging and much tenser. It becomes a game of teamwork and skill and it really elevates the experience. However, whilst being highly polished Left 4 Dead has some niggling flaws which mar its otherwise outstanding appearance. The game lacks a proper server browser and instead you can't choose the server you want to play on, the game does it for you. This is a problem as you can't check latency prior to joining the game, and whilst problems don't occur too often when they do it is incredibly frustrating.

Other issues are the short length of the main game; there are four campaigns each with four levels and a dramatic last stand finale. Valve has promised that they will release updates to develop the title in a similar manner to Team Fortress 2, with the first updates due sometime in 2009. The fact that only two campaigns are playable in Versus mode to start with is also a disappointment; presumably the others will follow. Thankfully the AI director manages to keep things interesting with slightly different item places and enemy locations each time. Yet, this comes predictable after some time with Tanks and Witches having a few specific locations where they tend to appear. On the harder difficulties a lot comes down to luck rather than skill on where the enemies will appear which does get frustrating.

Yet despite these problems, these are easily addressed in future patches and knowing Valve's dedication and commitment, these will be rectified. Overall, Left 4 Dead is an exciting and innovative original idea and there is no other game like it. With a group of friends covering your back, this is quite simply an essential experience.

Yet despite these problems, these are easily addressed in future patches and knowing Valve's dedication and commitment, these will be rectified. Overall, Left 4 Dead is an exciting and innovative original idea and there is no other game like it. With a group of friends covering your back, this is quite simply an essential experience.

Why I Love Zombie Games

Having only played this for an hour or so at a friends house (I can't afford it myself till after the year), I can only give kudos to Valve, as far as I can see, they've done a sterling job at actually making people use teamwork. The few games I played, one person was greedy, someone else died, which resulted in the other person dying. Working together seems to be what saves you in this game, perhaps more co-op games should take note.

Great point there. Whilst a lot of games are following the Co-Op trend, they aren't truly co-op as they essentially feature the single player with an extra person to help you. Left 4 Dead is a much better experience in that you have to work together and help one another, otherwise, as you mentioned, things quickly go to pot. I really hope that Valve iron out some of the issues I mentioned as they would really help to make a great game truly excellent.

I enjoyed this game for the half hour I played right up until I died by trying to "snipe" a witcher. It then sent me right back to the start of the level which was just annoying. It's a genuinely interesting game that has, IMO, set a whole new sub-genre within the somewhat watered down survival horror genre. I'd quite like to see it with faster weapons and reloading though - the game seems balanced between action and atmosphere, I'd like to see more killin' :p

More killing? On average you kill 2,500 infected per campaign!

More killing? On average you kill 2,500 infected per campaign!

Our best four usually hits about 4k. I'm loving it, it's everything that it was promised to be. The game should be played on Expert, otherwise the campaigns are too short / too easy and questionably boring.
Reply

I have played all 4 campaigns on Expert, however there are a few other problems which aren't Valve's fault. I have done one on Expert that I survived. In Blood Harvest I got to the finale after a few horus of playing, then just as we killed the second tank the server lagged out and we all were disconnected. Very frustrating. Another time, I was about to complete Dead Air on Expert, and as we went towards the plane one of the other idiots on our team who none of us knew, team killed us before we got there, meaning we all lost and he survived and there was nothing we could do. Very frustrating. I think Expert is good, but too much about luck rather than skill. Get an awkward Tank and it is pretty much impossible to do, even with 4 skilled players and voice communications.

We can go through Expert without wiping once in a couple hours, sometimes we get stuck 15 repeats on a level and give up. Annoying disconnects / occurrences: I disconnected in the chopper on No Mercy :D. Technically you dont have to survive to complete a campaign on Expert, as I died on Blood Harvest (due to a malfunction door), but still got the achievement.

The Dead Air incident didn't register for me, but the whole team killing people before they get to the rescue vehicle seems to be a common problem. It always shocks me how people can be that much of an idiot, I really hope Valve come up with some sort of system to try and stop it.

Play with your friends only, that's all I do. If I get a good round, I'll add people for future pooling.

I got all the way to the end on the first camgain and it wouldn't let me call for the chopper a second time. I'm gunna report the bug now
Reply

I got all the way to the end on the first camgain and it wouldn't let me call for the chopper a second time. I'm gunna report the bug now

You don't when you view the commentary. If you read it, it says that the commentary turns off achievements and the finale is not active.
Reply

Oh I see. Nevermind :) Thanks for the info. But yeah, you are quite right, very good indeed

I haven't played it yet, and I really want to, and as you guys have been absolutely raving about it, I'll have to buy it! xD Looks like Christmas isn't going to be so boring after all!