Many titles promise such things as realism, RPG-style experience points and collectables up the wazoo, but Life Goes On is having none of that. In fact, the story (such as it is) is given on the main screen and never mentioned again. A king has a poster showing The Cup Of Life, a magic portal and many, many knights at his disposal.

You control said knights as they seek out the Cup of Life in each level, avoiding traps of spikes and fire, and the ever-loveable knight-eating monster Jeff, to get the cup. Of course, this comes with a price which is made immediately apparent in the first level where your knight drops straight onto spikes and instantly dies. Pressing the spacebar summons another knight who lands upon the carcass and away you go.

The game literally has no tutorial, apart from “Press Jump to summon another knight” every time you kill one. You aren’t told how to climb spike walls using corpses, drop bodies upon switches or fire knights from cannons as macabre missiles. You aren’t told of a time to beat, a knight count to keep low or the ability to feed Jeff at any point. It doesn’t hamper the fun of sending ten knights in a row to their fiery doom, but most games usually give at least a paragraph about why you’re doing it. 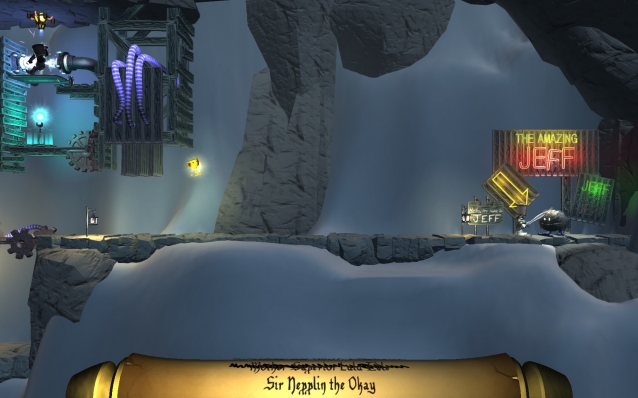 As you may have picked up by now, Life Goes On is a puzzle game where every level presents a series of spikes, switches, traps and more spikes which stand in between your knights and the Cup of Life. Each set of 10 levels is set to a backdrop - the first is a volcano and the second a snowy mountain for example. As I mentioned, there are a number of knights you’re expected to lose - and this is never zero. You literally cannot continue without sacrificing a knight to die on any given circular saw - but it’s fun to do.

This isn’t me being sadistic (this time), as the game has a great sense of humour about your careless mass murder. Every knight is given a completely different name, such as Dave, son of Jim or The Lucky Enfante Ted Payne on the scroll at the bottom of the screen. You can kill them fast enough and have a knight run several feet before the names catch up. But that’s not all, as naming them might make you attached to them like a puppy. At the end of a level it always says “Success” in large letters at the bottom as it tallies up your dead knights. However, it gives you a message too. “The HR Department would like to speak to you about your SUCCESS”, "SUCCESS for science!” and dozens more. Sometimes it’s a simple “Electrifying SUCCESS”, but it’s always fun to see what the game thinks of your efforts. 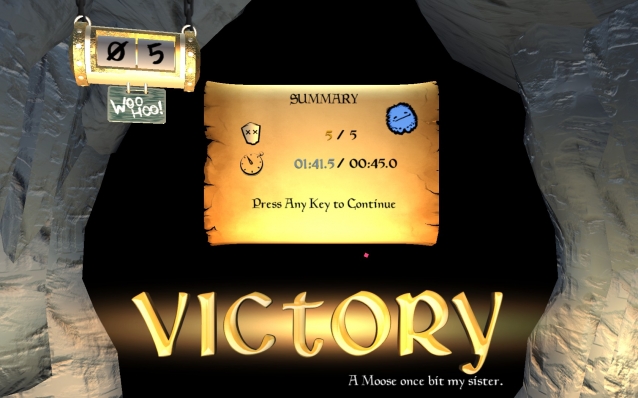 The knights make no sound, apart from a little scream as they inevitably die, but that’s fine as you don’t get time to enjoy any personality they might have had. The music is pretty upbeat but also repeats far too much. The graphics are cartoonish and they work well for this game. The effects are nothing special, but certainly don’t look out of place.

The difficulty level is quite good, though sometimes marred by the fact you may miss landing on a dead man’s chest by a fraction and lose a second knight. However that can work in your favour, giving you a wider landing strip the next time. There are no enemies and no time limit, so the game is really only as difficult as you let it be. All of the puzzles are eventually solvable, some just take more thought than others. All you require is your keyboard, to control the knight, and your brain as there is very little need for reflexes unless you’re trying to get a speed run or find an elusive Jeff. If you feed Jeff, you get an extra score and work your way towards an achievement.

The game is very fun, quite funny and easy to play. The lack of a story of any type is a bit of a downer, but that and given its accessibility and ‘just one more’ appeal, make this perhaps more suited to a mobile title than a full PC release. There are about fifty levels, but given some of them only take about one minute you could potentially be finished in an hour. There is some replay value in doing speed runs and trying to get all of the twenty-one Steam achievements, but little apart from that.

Life Goes On (Reviewed on Windows)

While this would be a strong game on mobile, the lack of storyline or replayability mar an otherwise great game about mass knight suicide.